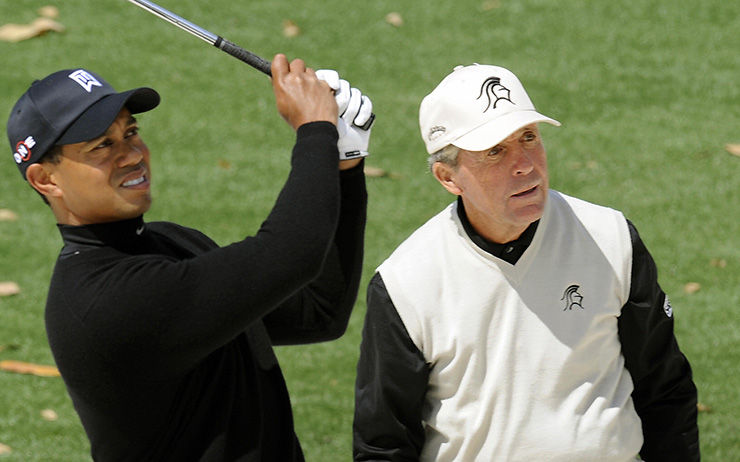 Woods Tiger Woods might not be “panicking’ about his withdrawal from last week’s Omega Dubai Desert Classic but South African legend Gary Player says the former world No.1 faces a “monumental challenge” if he is to ever compete again.

Woods’ eagerly-anticipated comeback is on ice after just three rough rounds, the last of them a horror opening five-over 77 at Emirates Golf Club.

He cited back spasms for his subsequent WD from the Dubai and has the golfing world on tenterhooks ahead of his next week’s Gensis Open at Riviera Country Club, the next stop on his four-tournament, five week schedule which looks overly ambitious given his tentative gait and cautions swing on the Majlis.

Speaking on the sidelines of his Gary Player Invitational charity golf day at Saadiyat Beach on Monday, Player said he didn’t “know anybody who isn’t pulling for Tiger to do well. If Tiger does well, it obviously benefits us all and the entire game.”

But the nine-time major champion, 81-years-young, said coming back from a 15-month lay-off and trying to compete when he wasn’t tournament sharp was never going to be easy.

“To me he looks tentative, he doesn’t look as positive. His nerves don’t look as good as he has when he’s in his prime, but this is something when you lay off, it’s not easy,” said Player.

“It’s like if a man leaves his office for seven months or eight months or nine months, he just doesn’t come back [into business] and excel. It takes time.

“The answer to Tiger is just that, time. Time will tell but he’s got a monumental challenge, monumental. This is something only Tiger knows within.”

Golf Channel analyst Notah Begay III, Woods’ closest confidant (at least the one allowed to speak to the media) talked to Tiger within a few hours of his arrival back in the U.S. from Dubai.

“Talked a little bit about the Super Bowl and maybe some things that weren’t golf related, but at the end of the day there wasn’t any real, I guess, panic which I think is good,” Begay said about Woods’ his decision to withdraw an hour before his secojd round tee-time on a wind buffeted Majlis.

Asked if he believed Woods’ challenge was more physical or mental, Begay hinted that Tiger had found the early going tougher physically than expected.

“There’s a tremendous amount that the athlete doesn’t know what they are going to encounter [after significant injury]. The body is always going to push back, you’re older, you’re in your 40s, you’re trying to do things that you were doing when you were 30. And it’s just not equitable and so the athlete has to adjust,” Begay told The Golf Channel.

“And this is no different, nobody knew, not even Tiger knew, what the obstacles were going to be from a physical standpoint and I think hitting four fairways in the first round of the Farmers Insurance Open and having to play from some of the thickest rough I’ve seen in quite some time on the PGA Tour, that takes a toll.

“A long flight overseas, both ways, that takes a toll and all of the sudden you have to do a re-evaluation of okay, ‘what am I capable of, what are my thresholds’ and what are we going to do to make adjustments moving forward and I think that’s where we are at right now.” – Notah Begay II on Tiger Woods

Begay said he had witnessed first hand a “broad change” to Woods’ work out regime which was “dramatically different” to his pre injury days and was focused on stability.
“Of course everybody has got an opinion, but I defer to Tiger and his understanding of where he’s at.”