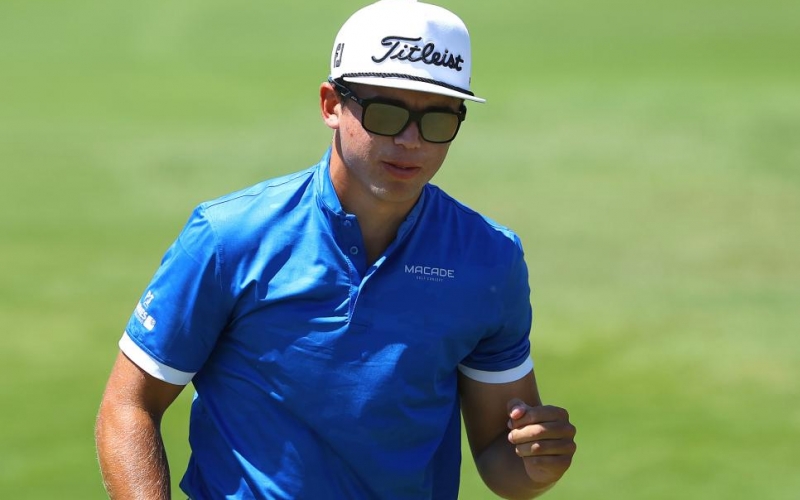 By John Huggan
The European Tour has spent the last three weeks on Spain’s picturesque Canary Islands. So has Garrick Higgo, who it is safe to say has been enjoying the views, both on and off the course. A remarkable 68-under par for the 12 rounds played, the 21-year-old South African picked up two victories, at the Gran Canaria Lopesan Open and on Sunday, the Canary Islands Championship.

A final round of seven-under-par 64, which included a hole-in-one, over the Golf Costa Adeje course—where last week the former UNLV stand-out finished T-8 in the Tenerife Open—took Higgo to 27 under and gave him a comfortable six-shot edge over the runner-up, Australian Maverick Antcliff. Tapio Pulkkanen of Finland was third on 20 under, one shot ahead of a five-strong group that included last week’s winner, Dean Burmester.

This one was all about Higgo, though. A semifinalist in the 2017 U.S. Junior Amateur (where he lost 3 and 1 to eventual runner-up, Matthew Wolff), the young left-hander is on the rise on multiple fronts. This third victory in only 27 European Tour starts sees him up to fifth on the Race to Dubai and just outside the top-50 on the World Ranking. Which is not to say Higgo is satisfied with what he has already achieved. Other targets remain, not least a place on fellow South African Trevor Immelman’s International squad at next year’s Presidents Cup.

“It would be awesome to play under Trevor,” said Higgo. “He was my captain in the Junior Presidents Cup. If I make that team, it would be unreal. I think I can do it, though. This is a hard game, but I just need to keep playing well.”

He has certainly been doing that recently, after what was a poor start to the year in the Middle East, where he missed the cut in Abu Dhabi, Dubai and Saudi Arabia. All of which already seems like a long time ago in the midst of such a strong run of form, one that saw Higgo flirt with Ernie Els’ all-time 72-hole scoring record of 29 under on the European Tour.

“I’m very tired and very thankful to be done,” said Higgo, who made seven birdies and an ace at No. 7 in a closing round that saw him forge ahead before the turn and stroll to a victory worth €230,500 ($280,362). “But also a little bit upset. My goal was to get to 30-under par so making a bogey on the 16th and three-putting the last hole for par was a little disappointing. I watch scoreboards all the time, so I knew where I was. But I didn’t know until afterwards that I was so close to Ernie’s record. I’m very happy though. Leading is never easy and I was feeling pressure right from the start. Two weeks ago was the first time I had led going into a final round.

“Having said that, I played so well today and hit the ball nicely. This win was actually a lot easier than the last one because I was hitting it so much better. I can’t believe it has happened so soon. But, then again, my game has been so good I can believe it as well. The hole-in-one was a perfect 9-iron. But I was on a roll at that point. I made birdies immediately before and after.”

Speaking of which, this was the third successive victory by a South African on the Old World circuit, a feat repeated on the second-division Challenge Tour when Wilco Nienaber lifted the Dimension Data Pro-am title at Sun City. And Higgo has been grateful for the presence of so many of his older compatriots, particularly in these unusual COVID-driven times.

“They’ve been great to me,” he continued. “They’ve taken me under their wing, and I’ve learned a lot from them.”