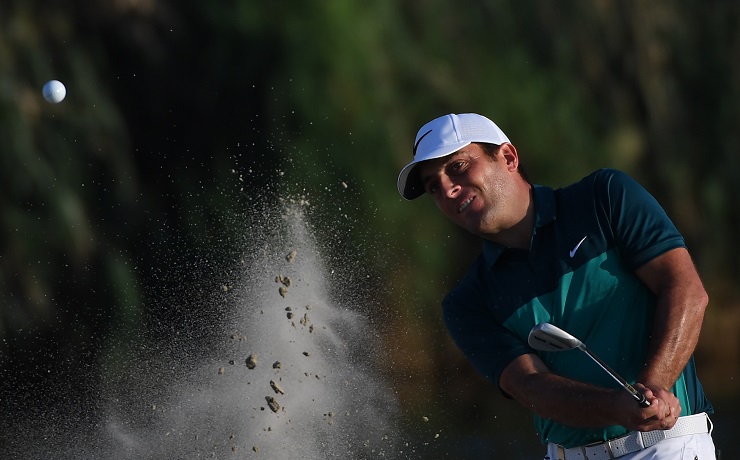 If Friday is any indication of what moving day is going to be like at the DP World Tour Championship, who on Earth can predict what will happen.

Spaniard Sergio Garcia and Italian Francesco Molinari take a one shot lead into Saturday’s third round after carding contrasting five-under-par 67s on a day of nip and tuck up and down the leaderboard at Jumeirah Golf Estates.

It seemed the duo would go into the weekend tied at nine under par 135 with Englishman Lee Westwood. That was until the first round leader dunked his wooded approach into the creek on 18, chunked a wedge onto the elongated green after his penalty drop and then two putted for a bogey to slip a shot back.

Englishman Tyrrell Hatton mixed eight birdies with two bogeys in an equal best of the day 66 to rocket 20 places up the leaderboard into a four-way tie for fourth at seven under. Bernd Wiesberger and Charl Schwartzel had 67s and Dutchman Joost Luiten a 69 to join Hatton on 137.

Andy Sullivan jumped 35 places with the help of an eagle at 18 in the day’s other 66 – a effort 10 shots better than his opening round to be two under. A shot further back on one under is Rory McIlroy who gave his weekend some meaning with a 68 after his opening 75.

The race for the Race to Dubai’s Order of Merit title remains tight with pole-setter Henrik Stenson keeping his closest rivals to hand. The Swede shot a 69 to be three under on 141, tied with Danny Williett who carded a 70. Alex Noren matched Stenson’s 69 to lie at four under 140. Their battle for the $5 million top-10 bonus pool, and whether McIlroy can have any say in the race for the $1.25 million winners’ reward, will be as absorbing this weekend as the dogfight further up the leaderboard.

There was drama at every turn Friday with Garcia producing the highlight, a Seve-esque par save on the par 4 12th from out of some thorny looking bushes. The pulled drive, penalty drop, seven iron, one putt magic kept the veteran Ryder Cupper’s round on course and with it his hopes of a first European Tour victory since 2014.

Molinari, who like Garcia has opened up 68-67, is looking to back up his victory in his home Italian Open earlier this season while Westwood, the inaugural DP World Tour Champion in 2009, will be buoyed by the fact his 66-70 start has been blemished by just two bogeys, as annoying as the lapse on the 36th must have been. – Kent Gray