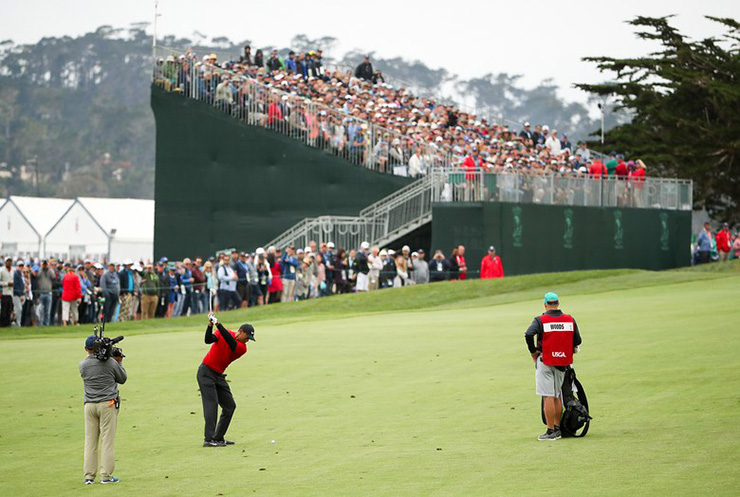 Tiger Woods hits his second shot on the 13th hole during the final round of the 2019 U.S. Open. (Christian Petersen)

By Alex Myers
Fox Sports’ fifth crack at covering the U.S. Open was almost universally viewed as a success. Even those involved would be the first to say the network has come a long way since Chambers Bay in 2015. But while TV critics could probably find a few things to nitpick other than the always present “More golf shots, less commercials!” demand (To be fair, Fox went nearly an hour without a single ad during the final stretch), there’s one thing fans couldn’t say on Sunday.

“They showed too much Tiger Woods!”

A small, but vocal crowd chants this refrain during almost every PGA Tour event—in particular, the ones when Woods isn’t contending. While their claims that Woods is shown a disproportionate amount certainly have merit, they never seem to grasp that most people want to watch the 15-time major champ no matter his position on the leader board. But Fox, at least for one week, bucked that trend.

The website Classic TV Sports has been tracking all the final-round shots shown at golf’s four major championships since the start of the 2014 season. The site’s Jeff Haggar has meticulously kept these records while being consistent in using approximately five-hour windows. On Sunday, he monitored this from 5 p.m. ET until the final putt was holed by Justin Rose at 9:31, and a couple of things jump out.

First, Fox showed 317 shots during that time period, which comes out to 1.17 shots per minute. That’s actually slightly below the 1.2 average of the 22 majors that have been tracked and down from last year’s 1.28 number on Fox. In comparison, this year’s Masters on CBS was at 1.38, but the PGA Championship, which was also on CBS, came in at only 1.14.

OK, so this number needs a lot of contexts. For one, Tiger teed off two-and-a-half hours before the final pairing of Gary Woodland and Rose. He began the day 11 shots off the lead and then bogeyed four of his first six holes to become completely irrelevant before a late rally to shoot 69. So five shots were actually more than enough for someone who finished T-21, especially when you consider Jason Day shot the same Sunday score and finished in the same place and wasn’t shown once. Or Chez Reavie, who played along Brooks Koepka in the penultimate group, started and finished T-3, and only had three more of his shots shown than Woods during that window. (According to Classic TV Sports, the trio of Woodland, Koepka and Rose combined for 204 or 64 per cent of all the shots shown during the window.)

That being said, it was still a surprisingly low number. Given Woods’ numerous absences and missed cuts in majors since 2014 when this data began being compiled, it’s hard to find great comparisons. In fact, this was the first Fox-broadcasted U.S. Open in which Woods has played on the weekend. But the two most similar situations occurred in Tiger’s two previous Masters appearances before winning this year—2015 and 2018—both, obviously, carried by CBS.

In 2015, Woods played in the third-to-last group but shot 73 to tumble to T-17. Yet, nearly half of those shots (35) were still aired. In his next Masters start and his first appearance since coming back from back fusion surgery in 2017, Tiger played in the 20th-to-last pairing, shot 69, finished T-32 and still had 18 of his shots shown. Only five golfers had that many of their shots shown during Fox’s final window at Pebble Beach.

Right or wrong, Fox clearly made a choice to limit the number of shots shown by Woods on Sunday, even airing his closing birdie on tape some five minutes late. Of course, the network would rather show him in contention next year.