Four tied for second-round lead at the U.S. Open 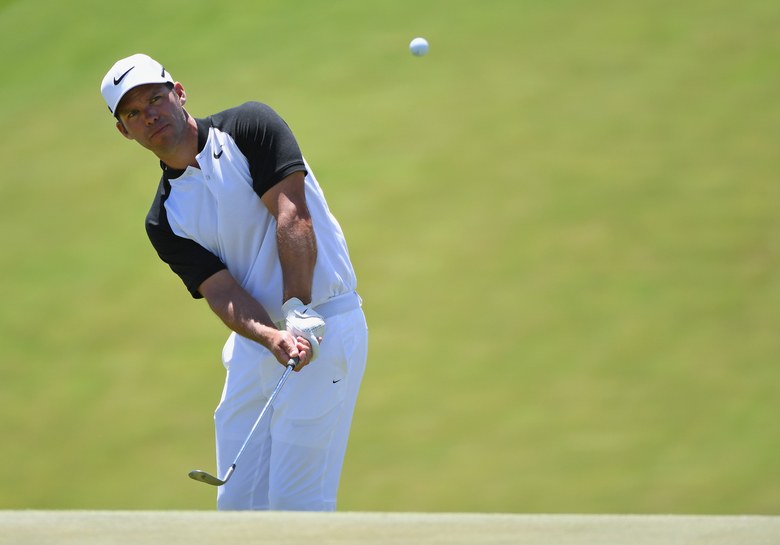 A first-time winner has come out on top in each of the last six major championships. After 36 holes at Erin Hills, where the top 18 names on the leader board have won a combined zero majors, it looks as though we are headed for a seventh. Heading that list are Paul Casey (pictured), Tommy Fleetwood, Brian Harman and Brooks Koepka, all of whom are tied for the lead at seven-under (137).

Casey, 39, shot one of the rounds of the day on Thursday in Wisconsin, a six-under 66 in the afternoon wave to get him just one shot off the lead. After playing a two-hole stretch on the front nine in two over, Casey fought back, making par on the 16th and then five straight birdies to get back to seven-under for the tournament. The Englishman finished his round with six straight pars to post a one-under 71. He has the third most top-10s in majors as a player without a victory (9).

The man who had a chance to seize the solo lead was Brooks Koepka, who got it to as far as nine under for the tournament. The one-time PGA Tour winner went out in four-under 32, but gave two shots back on his back nine to shoot a two-under 70. He’s now made four straight cuts in U.S. Opens, and is in position to finish in the top-20 for the fourth straight time as well.

Playing alongside one another were Tommy Fleetwood and Brian Harman, a duo that has just three U.S. Open appearances between them. They also have just three combined bogeys as a pair this week, and have shot identical scores, five-under 67s and two-under 70s, to grab a share of the lead.

First-round leader Rickie Fowler got off to a strong start, getting to two-under through 10 holes and extending his bogey-less streak to 28 holes, tied for the second longest in U.S. Open history. But Fowler went on to make three straight bogeys, and finished with a one-over 73. He joins Jamie Lovemark and J.B. Holmes at six-under (138), one shot off the lead.

Five players are at five-under (139), including Hideki Matsuyama, who had a prime look at birdie on the 18th hole to match the record of eight under in a U.S. Open, but it just burned the edge, and he cleaned it up for a seven-under 65. Chez Reavie, who hasn’t played in a U.S. Open since 2012, also posted a seven-under 65 and sits at four-under (140) for the championship.

For the first time since the official world golf ranking was created (1986), the top three players in the world, Dustin Johnson, Rory McIlroy, and Jason Day, all missed the cut. They were a combined 19-over for the tournament.