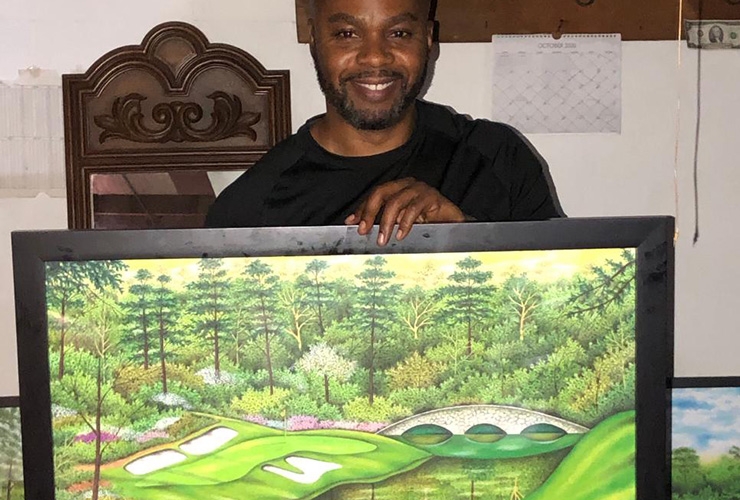 By Max Adler
Former President and current middle-handicapper Barack Obama received a special golf gift this Christmas. Michelle gave her husband a drawing of the 12th hole at Augusta National that she purchased directly from the artist Valentino Dixon.

As has been well chronicled, Dixon was exonerated in 2018 after serving 27 years in prison for a murder he did not commit. His story was recently told again in a segment on HBO Real Sports with Bryant Gumbel that aired this October, which the former First Lady saw and was moved by. (Publicity disclosure: I’m interviewed in this show for my part in reporting the case.)

Dixon was both moved and surprised to get a phone call from Michelle’s assistant inquiring about an original. For much of the half a lifetime Dixon was locked in Attica Correctional Facility near Buffalo, N.Y., he imagined he wasn’t there, but the news of the result of the 2008 presidential election stands out as a vivid and real memory.

“It was a big day for us in the jail,” Dixon said. “Guys were going crazy, shaking the bars of the cells. That’s all we can do to celebrate a moment, and there was this feeling that here was a president who was finally going to do something for prison reform.”

Dixon’s mother, Barbara, worked the poll booths that election, the only time in her life she’s volunteered in a civic capacity.

So happens the result of the 2016 election created a similarly raucous atmosphere inside Attica. “Donald Trump wasn’t a politician, so he gave us hope, too, and people need that type of hope whether things will happen or not,” Dixon says. The success of the implementation of the First Step Act can be debated, but this bipartisan bill signed into law by President Trump in 2017 was the first criminal justice reform bill passed in nearly a decade.

Notable about the piece Michelle bought for Barack, a 20-inch-by-30-inch coloured-pencil on matte-board entitled “Augusta The Beautiful,” is that it was the first drawing Dixon completed as a free man.

“When I was in my six-by-eight-foot prison cell, I was drawing nonstop, 10 hours a day, never taking a day off. When I got out, I wondered would I have the same discipline?” Dixon says. In the two years he’s been out other ambitions have largely replaced a desire to work in isolation, such as travel, reconnecting with family, and hosting episodes of a program called ”Draw and Talk With Me” where invited guests to receive sketching lessons while discussing social issues. But the drawing that will presumably now hang on the wall of the 44th President of the United States is an answer to Dixon’s self-directed question.

“For me, my life is about redemption, leaving a legacy of some kind to remind people that they can overcome anything,” Dixon says. “Because we will each be tested in life, we just don’t know how.”

This Christmas morning of a trying year, for Valentino Dixon and the Obamas, it was good to both give and receive.

Along with the drawing Dixon recorded a video message for Barack Obama.