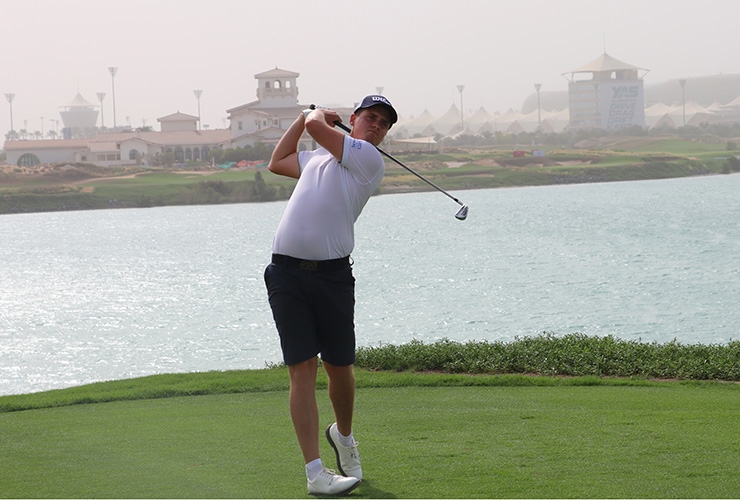 By Kent Gray
James Allan has known success on the MENA Tour before but is 18 holes away from a belated 25th birthday present at Yas Links that would trump it all.

The English lefty started the second round of the Abu Dhabi Open by Arena a shot adrift of overnight leader Niclas Weiland but ended Tuesday two strokes in the lead after an equal best of the day 67 to go with his opening 66 on Monday, the day he celebrated his 25th.

Weiland slipped to tied third with an even-par 72 while English journeyman Matt Killen moved into solo second after matching Allan’s 67.

Allan has twice been crowned the MENA Tour’s now Journey to Jordan amateur Order of Merit champion – in 2014 and 2015 – but has not won a professional title on a recognised tour. He’s hoping to change all that on Wednesday.

“Tomorrow, I want to do the same things I did on the first two days,” the Chelmsford pro said.

“I am actually enjoying myself on this golf course. I just want to go out there and give my best and let’s see where that takes us.”

England’s @jamesallangolf takes us through the five-under par 67 that eventually earned him a two-shot lead going into the final round of the Abu Dhabi Open by Arena.

He also describes his eagle on the par-5 seventh hole and the tough closing stretch because of the headwind. pic.twitter.com/eLe2cl9VVh

Taking advantage of the far more benign conditions following the first round’s 40-50 kmph winds, Allan sent bogey-free on Tuesday in a round highlighted by a driver, seven-iron, one putt eagle on the par-5 7th.

“I started solid and that eagle on the 7th gave me a jumpstart. I had a few chances on the back nine but could not make any of them. The last four holes were playing really tough today, into the wind, so I was quite pleased with that effort,” said Allan who is 11-under-par heading into the final round.

A former Abu Dhabi resident who worked at Saadiyat Beach Golf Club, Killen, has returned to the MENA Tour after playing the regional Pro-Am circuit in 2016 and 2017. Like Allan, the 30-year-old Asian Development Tour player he is also chasing his first recognised tour win. 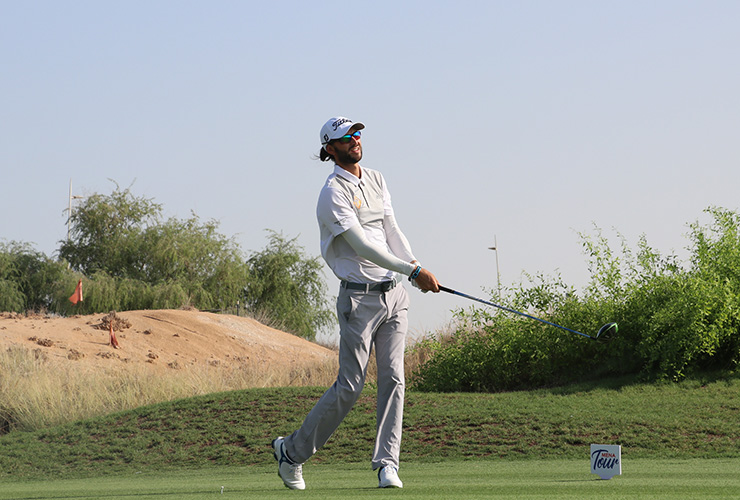 “A win would mean a lot to me. I have worked very hard on my game in the last couple of years. Hopefully, I can get it done tomorrow, but I don’t want to think about it just yet,” Killen said.

“Considering that I shot a 68 yesterday in those difficult conditions, a 67 today would not sound that good, but I will take two solid rounds like that any day. I just made one bogey yesterday and one today and managed to keep myself out of trouble for the most part, and when I did get into trouble, I scrambled well. “

On the amateur leaderboard, Dubai-based 15-year-old Josh Hill (72) continued to be on top despite finishing his second round with three successive bogeys. He was on three-under-par 141, with Jack Floydd (73) and Ben Davies (72) trailing him by two shots at 143.

The cut was applied at three-over-par 147 and 51 professionals made it to the final round. Among those with Wednesday off is Australian Daniel Gaunt, a fact that won’t have gone unnoticed by South African MG Keyser. Keyser,  tied  5th, five shots adrift of Allan, looks set to extend his lead atop the Journey to Jordan pro-OOM, especially as second-placed Gaunt won’t add to his points tally this week..

Amateur Robin ‘Tiger’ Williams, who won the Journey To Jordan-2 last week by eight shots, was at even-par 144 after a round of 71.