For Jon Rahm, becoming World No. 1 was never a matter of if, but when. And the when came in spectacular fashion 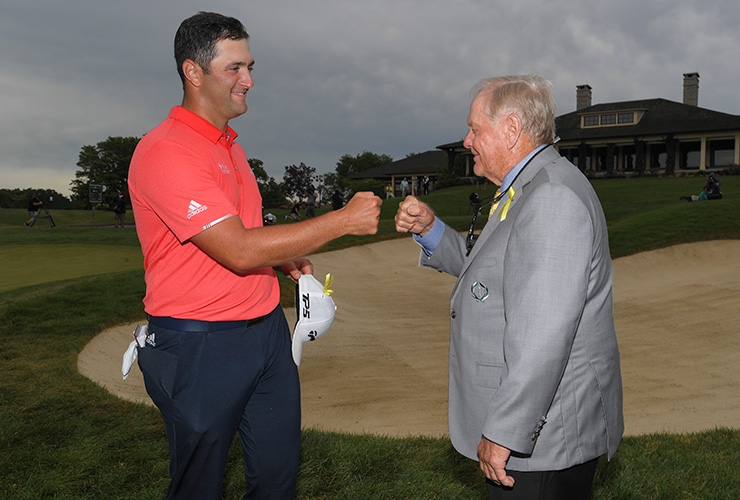 By Daniel Rapaport
DUBLIN, Ohio — It wasn’t easy. Jon Rahm knew it wouldn’t be. He started the final round of the Memorial with a four-shot lead, but realized Muirfield Village would bring everything it had on Sunday. Not all four-shot leads are created equal.

Rahm would have to fight off a U.S. Open-ready golf course, and 20-plus-mile-per-hour winds that rendered some greens downright unholdable. And he was competing against the strongest field assembled in a non-major championship. Then there was a five-hole stretch that saw his game go missing. Oh, and add a rules controversy to boot. All this while also knowing a victory would accomplish one of those childhood-dream-come-true moments: Becoming World No. 1.

Yep, it wasn’t easy, and it wasn’t pretty, but it was enough. Rahm gutted out a three-over 75, which included a late two-shot penalty, to win the Memorial by three shots over Ryan Palmer. His victory, coupled with a T-32 finish from Rory McIlroy, means he now sits alone at the summit of this sport.

At just 25, Rahm becomes the 24th man to reach the top spot and the second Spaniard to do so, joining only his hero, Seve Ballesteros.

“It’s pretty surreal to think it’s happened this quickly,” said Rahm, after shooting a nine-under 279 for the week at Muirfield Village, by far the highest winning 72 hole score since the PGA Tour resumed its season six weeks ago. “How many people get to achieve a lifelong dream in their mid-20s? It’s incredible. To be a Spaniard, the second Spaniard to ever do it, given there’s not many Europeans that have gotten to this spot, it’s a pretty unique feeling, so I’m going to enjoy it for a while.”

It’s also a bit bittersweet, given he has lost two family members since the COVID-19 pandemic began, including his grandmother, and has been unable to attend either funeral.

Becoming World No. 1 has, to some extent, always felt more like a when than an if moment for Rahm. He was the top-ranked amateur in the world for more than 60 weeks, more than any golfer since the ranking was created in 2007. McIlroy has said that when TaylorMade signed Rahm out of Arizona State, they felt they’d signed a top-10 player in the world right then and there. After turning pro in the summer of 2016, Rahm finished tied for third in his first PGA Tour event as a professional and tied for second in his fourth. When you ask other tour players about his game, you’ll get some version of the same response: That guy is really freakin’ good. And tour players are a notoriously tough audience. They don’t hand out compliments easy.

Rahm’s 68 on Saturday, which put some daylight between him and his chasers, was a tour de force. He was a world-class player at the top of his game, every shot in his arsenal present and accounted for. He’s had that for a while, though. He’s also had an internal drive fueling him, a passion so fervent that it sometimes becomes counterproductive. Simply put: Rahm runs hot. Which is OK, of course. Tiger Woods famously ran rather warm in his younger years. Rahm is still learning how to properly channel it, to calm himself down and avoid the self-inflicted wounds that have, by his own admission, hindered him in the past.

“A couple years ago, I don’t think I would be here with a four-shot lead right now going into tomorrow,” Rahm said Saturday night. “It’s a slow process. Unfortunately, I’m a person who learns from mistakes, and luckily I’ve been able to. Hopefully I can keep doing it tomorrow and just follow the same mindset that I’ve had the last few days.”

He would need every iota of that newfound patience. The conditions on Sunday demanded it of every player in the field. Mother Nature teamed up with an already-devilish setup to produce a golf course that yielded exactly one score in the 60s—a 68 from Matthew Fitzpatrick, with Jim (Bones) Mackay on the bag, en route to a solo third finish. Meanwhile, nine players shot in the 80s. It was the highest-scoring average (75.96) on the PGA Tour since the first round of the 2018 U.S. Open at big, bad, baked-out Shinnecock Hills. 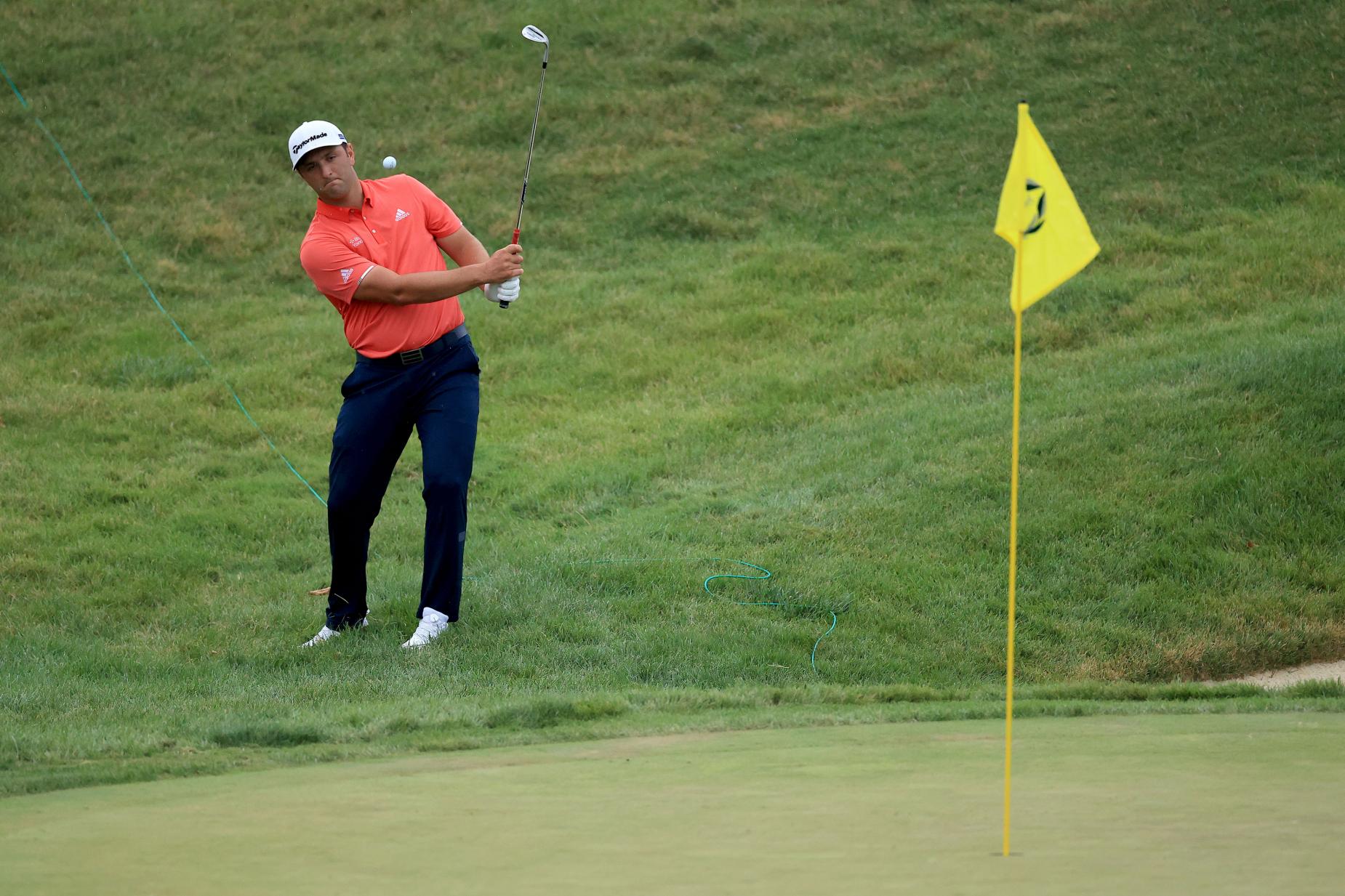 Andy Lyons
Rahm hits his second shot on the 16th at Muirfield Village on Sunday. He’d hole the flop shot for what he thought was a birdie, but would become a bogey after he received a two-stroke penalty for moving the ball mistakenly before hitting the shot.

Rahm, though, didn’t seem to notice the high scores around him. At least not early. When he turned on Sunday in two-under 34, he held an eight-shot advantage and this tournament by the throat. He loosened his grip considerably over the next five holes, going bogey/double bogey/par/par/bogey from Nos. 10-14 to give Palmer a glimmer of hope.

“I could have completely lost it many times,” Rahm said. “Maybe in the past I would have, but I didn’t. I just kept fighting. I knew it was a complete grind, and it’s a true honour to be now the Memorial Tournament champion.”

But Palmer, 18 years older than Rahm and his teammate when the two won the Zurich Classic of New Orleans team event in 2019, could not convert a key birdie putt on 14, then failed to birdie the par-5 15th, sinking any comeback chances … to win the main tournament.

“At the end of the day I guess I won the ‘other’ tournament,” Palmer said. “Coming in the last two holes I told myself, I’ve got a two-shot lead. That’s at least clear [solo] second, and I know what that’s going to do for me coming up soon.”

The outcome was not in doubt when the final pairing stepped to the 16th tee. Only the margin of victory, which wouldn’t sort itself out until after Rahm holed out on 18. Clouding things was a rules issue on the 16th hole. After tugging his 9-iron long and left of the par-3 green, Rahm hit a jaw-droppingly good little flop shot, which pitched on the front edge of the green and found the bottom of the hole. He yelled, and he slapped Palmer’s hand high-five, and it was a signature moment that signified his ascension to World No. 1. Until it wasn’t. A zoomed-in camera on the broadcast showed Rahm causing his TaylorMade ball to move, which ultimately resulted in a two-stroke penalty. He didn’t find out until CBS’ Amanda Balionis told him afterwards. He looked genuinely shocked but eventually agreed with the decision to dock him the two shots after seeing the indisputable evidence.

“All I can say is as minimal as it was, it moved; I accept it,” Rahm said. “It doesn’t change the outcome of the tournament. It just puts a little bit of an asterisk in it in the sense of I wish I could just keep that birdie because it was one of the greatest shots of my life.”

Ultimately, it mattered little besides soiling what would have been an iconic moment. Rahm parred 17 and 18 for what he thought was a five-shot victory. OK, so it was actually a three-shot victory. Good thing margin of victory does not matter on the PGA Tour. Or the World Rankings.