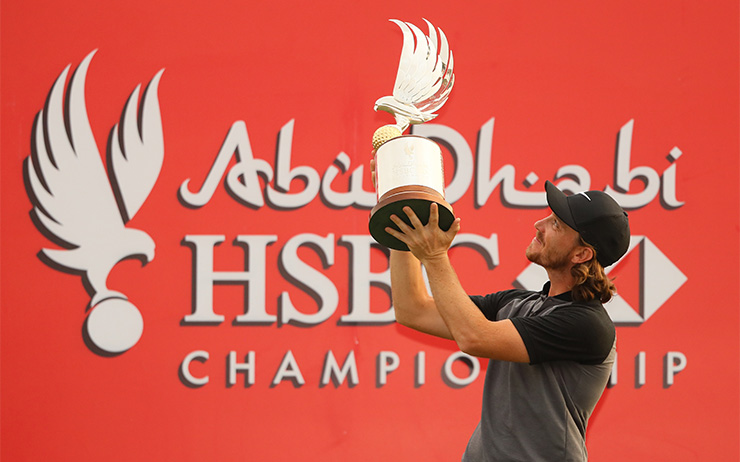 Tommy Fleetwood turned 26 on Thursday. Talk about sorting your own birthday present.

The Englishman captured the Falcon Trophy Sunday, roaring home in 31 strokes on a windswept National for a final round 67 to win the Abu Dhabi HSBC Championship on -17, one clear of U.S. Open champion Dustin Johnson and Spaniard Pablo Larrazabal.

Fleetwood started the day a shot back of Tyrrell Hatton (who faded to T13 at -10) but coped best with the gusty wind the buffeted The National, not to mention the pressure of easing past and then holding off a decorated chasing pack as the Desert Swing opener reached its dramatic climax.

He triggered his irrepressible back nine with a chip in for eagle on the par 5 10th. Birdies followed at the 11th and 16 before the Southport man secured the title with a two-putt birdie on 18. That was set up by a majestic 3-wood to the heart of the final green after Fkeetwood had secured a free drop from a cart path after tugging his final drive left.

The world No. 102 is expected to leapfrog just inside the top 50 – guaranteeing automatic major championship and World Golf Championship invites – after his Abu Dhabi win.

It also continued a fine run of form since last season’s Open Championship, with 10 top-20 finishes in his last 14 starts including a tie for third in his first event of the new European Tour campaign at the UBS Hong Kong Open in December. Fleetwood was 9th in the Race to Dubai before Sunday but will surge up that leaderboard too.

Johnson finished with an eagle on the last in a closing 68. Larrazábal needed to eagle the last to force a playoff following a rousing birdie on 17. But the 2014 champion pushed his drive, pulled his three wood approach into more hay and had to make do with an up and down birdie for a share of second with DJ.

Austria’s Bernd Wiesberger also signed for a 68 in finishing at -15 alongside three-time champion Martin Kaymer and Thailand’s Kiradech Aphibarnrat, who had rounds of 69.