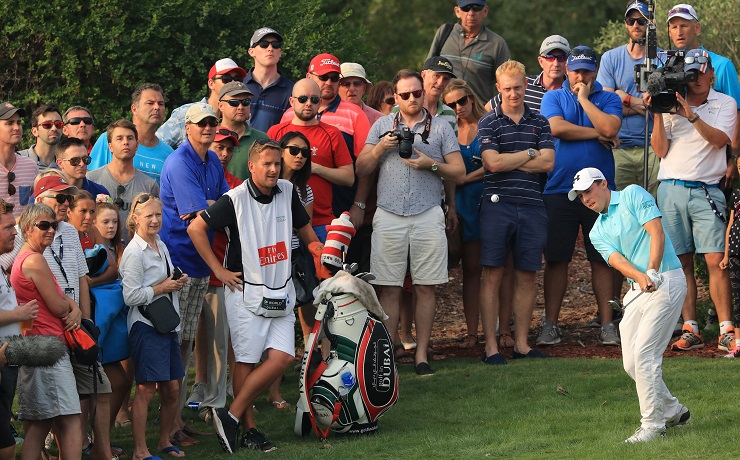 Matthew Fitzpatrick mightn’t have the visible backing of a club maker on his bag but that just makes the Englishman even more grateful for the sponsor he has proudly lugged around the world since mid-2014.

golf in DUBAi started the mutual appreciation game when they signed Fitzpatrick as an “ambassador” just before he made his pro debut at the Irish Open in June 2014 and the fresh-faced Yorkshireman has been returning the favour in the best way possible ever since.

Sunday’s win was Fitzpatrick’s third European Tour triumph in 13 months, some return on the sponsors’ investment. Not that it was much of a gamble signing the first player since the legendary Bobby Jones to earn top amateur honours in both the British and US Opens.

It certainly meant a lot to Fitzpatrick though given how the Ryder Cupper relied on sponsors’ exemptions to get his pro career out of the blocks.

“I turned pro, no status or anything like that, and then they backed me from the start. They have been my golf bag sponsor for 2½ years now, and they have been fantastic,” Fitzpatrick said of golf in DUBAi.

“I’ve got invites into, obviously straight into the Desert Classic every time, and played a few MENA Tour events, and yeah, they have just been a brilliant sponsor.

“And obviously to win the last event of the season, and obviously have their bag for the last event, is special. I’m really appreciative of their support and help, and I hope that I’ve been a decent ambassador.”

That goes without saying as Mohamed Juma Buamaim, the vice chairman and CEO of golf in DUBAi, identified at the time the deal was with Fitzpatrick was unveiled. “We want to give young people the opportunity to be the best and we see Matt as somebody who will not only fulfil his massive potential, but also demonstrate the quality of character, richness of spirit and strength of self-belief which ‘golf in DUBAi holds so dear.”