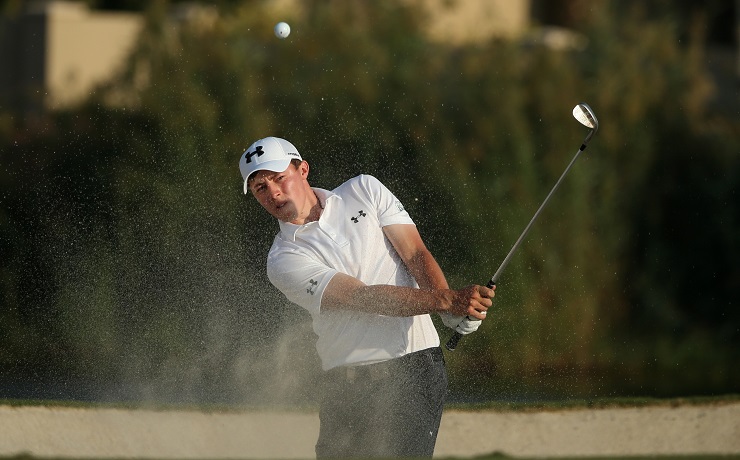 Matthew Fitzpatrick could have been forgiven for taking a firm grip on the top table in the DP World Tour Championship interview hut and holding on for dear life.

As if the young Yorkshireman’s career wasn’t already clipping along at warp speed, imagine the giddy hour or so leading up to this, his anointment by the gathered media corps as the next great British golf hope.

What’s next Matt? Are you going to move out of Mum and Dad’s gaff in Sheffield? Oh, you’re eyeing property in Florida. Does that mean you’re going to play the PGA Tour? By the way, did we mention you’re the youngest Brit, at 22, to win three European Tour titles, leaving that relic Sir Nick Faldo in your exhaust? Talking of exhausts, what car is it you drive? What’s the secret Matt? Tell us. Tell us…

Fitzpatrick, still trying to make sense of the dramatic end to an epic Race to Dubai decider and all the lucrative consequences on the horizon, drew a deep breath and carried on with the craziness that is his life.

“It’s just happened so fast, and I pretty much say it every week because I get similar questions,” Fitzpatrick said, recalling how he’d secured his European Tour Card at Q-school two years earlier to the day.

“Obviously I’ve won the final event of the year, [when] two years ago, I was just getting on the Tour and I was just happy to keep my card. Now I feel like with this win, it gives me confidence to sort of push even further and further.”

So what will 2017 look like? The golf in DUBAi ambassador admitted he was headed for Florida in three weeks to look at property and that his parents had sought McIlroy’s counsel and real estate contacts.

“I think he sort of did the same as what I’m planning to do, is maybe rent at the start of next year, just get a feel for the place and then maybe pick a place then,” said Fitzpatrick who is set to cash in the multi-year European Tour exemption the DP World Tour Championship win affords as much as the €1.21 million winner’s cheque.

“I’d love to play on the PGA Tour eventually but I don’t want to rush it. I won’t just abandon the European Tour. Obviously it will always be the main tour I play, but three years to sort of give it a go gives me a good opportunity [to get a PGA Tour card], I feel.”

Fitzpatrick clearly has the game. He’s sneaky long and welded his putter like a magic wand around Earth. His closing 67 Sunday, capped by that seemingly nerveless up and down birdie from a greenside trap on the 72nd hole after Tyrrell Hatton’s agonising water ball bogey, means Fitzpatrick is a combined 30 under par for eight career rounds on the Jumeirah Golf Estates course. In fact, he’s never orbited the Greg Norman layout in more than 70 stokes.

Of course, his precocious talent was evident even before he turned up in Dubai. Remember this is the first player since Bobby Jones to win low amateur honours at both the British and US Opens.

His European Tour breakthrough came at the British Masters in October 2015 and there was a sneaky T7 at the US Masters in April. Perhaps the greatest asset in his armoury is an unflappable outward demeanour, demonstrated by the four footer he coaxed into the hole to finally put Hatton out of his last hole misery.

Fitzpatrick, for all the new expectation, can draw on a rough experience before he won his second European Tour title at June’s Nordea Masters when the going gets tough again, as it invariably does in golf.

“Just before Nordea, I was struggling, and sometimes I just had to sort of sit back and realise how far I’ve come. Before Nordea, I had won a Tour event, I had played in the Masters and got in the top-50 in the world, and I was 21.

“Like you say, there’s not too many people that do that. And obviously to get my third win at 22, yeah, it is a very fast rise. Obviously it’s not always going to be the case. You’ve just got to take the highs while you can and just keep working hard when it’s not going your way.”

Given his tidy Mike Walker and Pete Cowan greased game and a mental aptitude that belies his baby-faced looks, Fitzpatrick seems destined for more ups than dips as his career hurtles ever onward. – Kent Gray