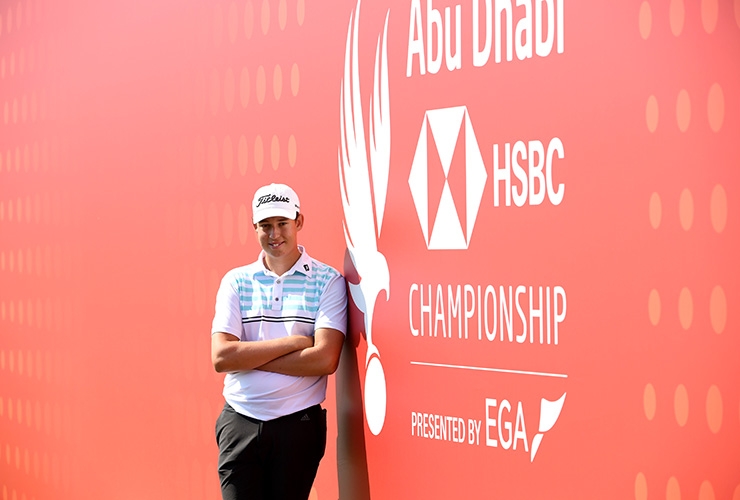 Josh Hill poses for a photo on the 18th during a practice round ahead of the Abu Dhabi HSBC Championship at Abu Dhabi Golf Club on January 14, 2020, in Abu Dhabi, United Arab Emirates. (Photo by Ross Kinnaird/Getty Images)

By John Tully-Jackson
Brooks Koepka and Josh Hill, drawcards at the opposite end of golf’s spectrum, find themselves in similar positions on the draw sheet for the opening round of the 15th Abu Dhabi HSBC Championship.

While world No.1 Koepka is out early at 7.40am on Thursday, Dubai-domiciled English amateur Hill has been afforded a lie in – if he can get any sleep at all ahead of his dream European Tour debut.

RELATED: After Being Beaten By Josh Hill In A Partial Practice Round, Brooks Koekpa’s Praise Of The MENA Tour Phenom Is Real

The modest MENA Tour upstart, still only 15, will tee it up at 12.35pm from Abu Dhabi Golf Club’s 1st tee in the company of former Masters champion Charl Schwartzel and Austrian Matthias Schwab.

Koepka will partner reigning champion Shane Lowry and two-time champion and Tommy Fleetwood for the first 36 holes, at 7.40am from the 10th on Thursday and at 12.05am from the 1st on Friday.

Preceding Koepka and co. on Thursday (from the 10th) is Abu Dhabi debutant Patrick Cantlay, teeing it up with former Masters champion Sergio Garcia and super-steady Bernd Wiesberger at 7.30am.

The other American drawcard, Bryson DeChambeau, starts from the 1st tee in the presence of Englishman Matthew Fitzpatrick and Branden Grace, who is going for back-to-back trophies this week after his sensational South African Open win. Their curtain parts at 12.05pm.