The finish Fowler’s
been waiting for 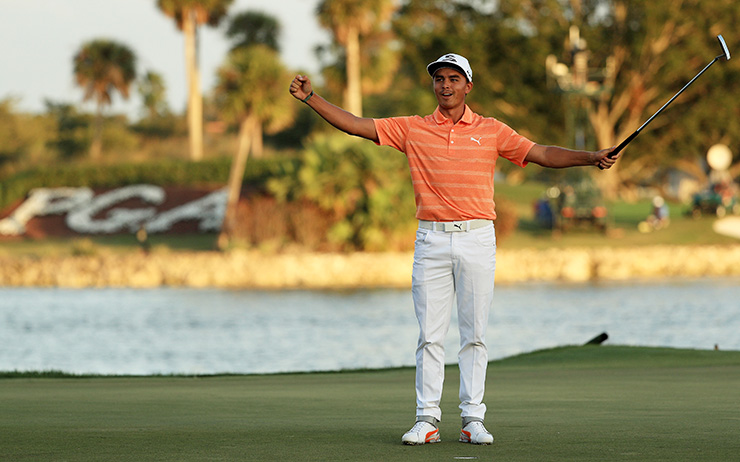 It didn’t do Rickie Fowler any good to get hung up on the ones that got away. Analyse and move on.

But Fowler knew that with an 0-4 record with 54-hole leads in his PGA Tour career, he needed to start closing out tournaments when he had the opportunity to win.

He did so Sunday, shooting a wild one-over 71 to win the Honda Classic by four strokes over Morgan Hoffmann and Gary Woodland for his first victory since Abu Dhabi 13 months ago, and fourth on the PGA Tour.

“Mistakes were going to happen,” said Fowler of windy conditions on a pressure-filled day. “Bad swings were always going to happen. You can’t play a perfect round of golf.”

With a four-shot lead at the start of the day, Fowler made two sloppy bogeys and a double after hitting into the water at the par-4 6th to see his lead eventually shrink to just one going into PGA National’s scary back nine.

But Fowler poured in a 38-footer for birdie from the back of the 12th green to go back up by two, and then made another from 23 feet on the 13th to go up by three. He was five ahead before harmless bogeys on his final two holes.

Just how big might the victory be? “I say this with all of my guys,” said Fowler’s swing coach Butch Harmon, who had played golf with his pupil the Friday before and came away liking what he saw.

“Everything we do is pointed toward the majors and peaking for them.” The Masters is just six weeks away.  – Brian Wacker