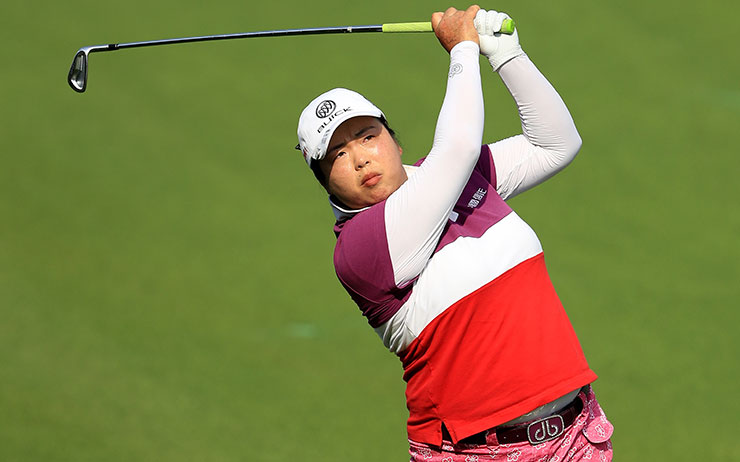 Even Shanshan Feng’s off days aren’t so bad at Emirates Golf Club.

The three-time defending champion wrestled with an icy cold putter in the opening round of the €500,000 Omega Dubai Ladies Masters Thursday and was even forced to play a late shot left-handed.

But the 27-year-old world No.4 still managed to conquer up an even par 70 around the Majlis to settle into a 16-way tie for 31st place overnight. More importantly, the Chinese superstar is just five shots adrift of overnight leader Florentyna Parker (England) and knows how to go low in Dubai, illustrated by her record 21-under-par winning totals in 2015 and 2012.

“My ball-striking was actually very good. I had so many birdie chances but my putting wasn’t really working,” Feng said.

“I was missing all the short birdie putts and also the par putts, also. I think even par is not a great score, but I still feel like at least I tried my best.”

It was unusual not to see Feng’s name on the leaderboard and the Omega ambassador found herself in another foreign position on the 17th when her ball nestled so close to the lip of a fairway bunker she was forced to play her second shot left-handed.

Typically she escaped with a gritty par to ensure her card was no more topsy-turvy than three birdies and three bogeys suggested.

“I had to go left-handed, but then I had to call the rules official to ask if I could use the back of my club to actually hit the ball,” she said.

“I’ve never done that, so before I hit it, I didn’t even know where the ball was going, but I just gave it a swing, and actually it went like 70 yards. My caddie said, oh, you surprised me, you actually can hit it 70 yards. I was really happy I saved a par there.”

With the tournament reduced to 54-holes following the tragic death of caddy Max Zechmann on Wednesday, Feng will be looking for a fast start Friday but thinks she may have found the source of her putting ills.

“I think maybe my posture was a little bit off, and then I think my putting was getting better towards the end but I didn’t have too many holes left when I started to feel like I could putt. Yeah, that was it.”

With that seemingly sorted, don’t be surprised to see Feng scooting up the leaderboard Friday to give herself a shot at a fourth title.