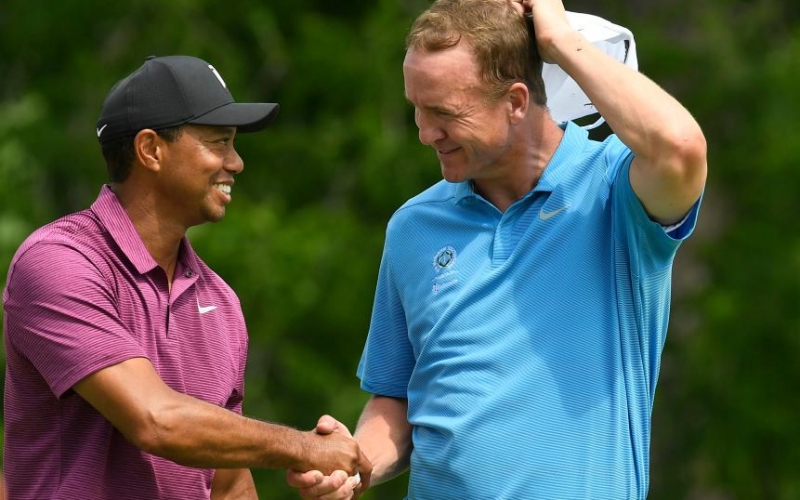 By Christopher Powers
It was far from perfect, but last Sunday’s TaylorMade Driving Relief event gave golf fans a much-needed respite from the current state of the world. It also offered a glimpse of what could be golf’s new normal, at least in the near future.

This Sunday, we’ll get another look with The Match: Champions for Charity. No disrespect to Rory McIlroy, Dustin Johnson, Rickie Fowler and Matthew Wolff, but The Match’s quartet of players is a bit more star-studded, with Tiger Woods, Phil Mickelson and a pair of NFL legends in Peyton Manning and Tom Brady. Everything you need to know about the event—how to watch, the format, the teams, etc.— can be found in our viewer’s guide below.

The Teams
The two-man teams for The Match: Champions for Charity are Tiger Woods/Peyton Manning and Phil Mickelson/Tom Brady.

The Format
The format for the event is an 18-hole match, though the front and back nines will be very different. On the front nine it will be Four-Ball, better known as best ball to the weekend golfer. Each team member plays their own ball, and the lower of the two scores is the team score for that hole. The low score between the two teams would win the hole. Brady and Manning will each get three strokes on the front nine, one on a par 3, one on a par 4 and one on a par 5. A committee will determine which three holes.

On the back nine, the teams will play a Modified Alternate shot, which some may know as the Pinehurst format. In this format, each team member hits a tee shot, then they select the best tee shot of the two and alternate from there until the ball is holed. There will be no handicap for Brady and Manning in this format.

In the event of a tie, the match will go to an extra, shortened hole. Teams will continue playing Modified Alternate Shot, though it will be from a spot 100-125 yards away from the 18th green. They’ll repeat until a winner is determined.

How To Watch
The Match: Champions for Charity will be broadcast live on TNT, TBS, truTV and HLN on Sunday, May 24, beginning at 2 p.m. ET. It can also be streamed on TBS.com, TNTdrama.com, as well as the TNT, TBS and Bleacher Report (B/R) apps on mobile devices.

The Location
The Match: Champions for Charity is being held at Medalist Golf Club in Hobe Sound, Fla. The course, originally designed by Greg Norman and Pete Dye in 1995, was redesigned in 2015 by Bobby Weed. Woods, who is a member, should have a distinct home-course advantage.

The Charity
Collectively, WarnerMedia and the four golfers will be making a $10 million donation to benefit COVID-19 relief. The competition will also include a partnership with the ALL IN Challenge, as well as a number of additional on-course challenges for charity.

Additional Challenges
So far, there have been two reported challenges that will take place. According to Yahoo Sports, players will play Medalist’s par-4 fifth hole with only one club, a page straight out of MGM Resorts’ The Challenge, which took place this past fall in Japan with Tiger among the foursome competing. On Tuesday, Bleacher Report announced that Charles Barkley, who will be one of the analysts for the event, will also play one hole as part of a Bogey or Better challenge for an additional $200,000 to charity.