Everything you need to know about “The Challenge: Japan Skins” 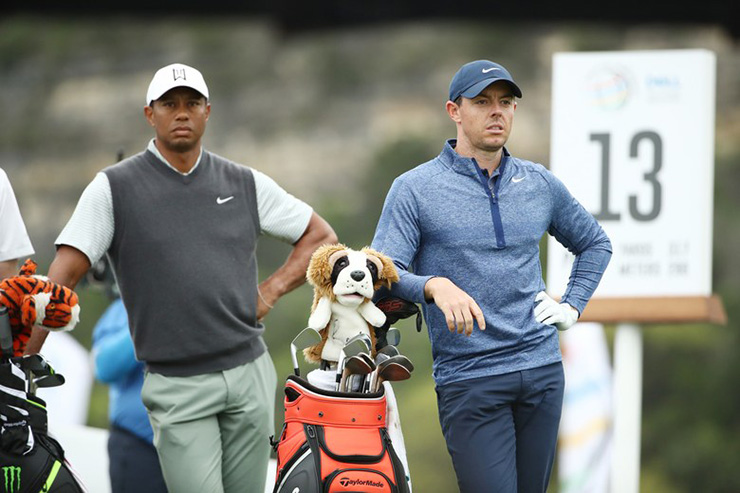 AUSTIN, TEXAS – MARCH 30: Tiger Woods of the United States and Rory McIlroy of Northern Ireland stand on the 13th tee during the fourth round of the World Golf Championships-Dell Technologies Match Play at Austin Country Club on March 30, 2019, in Austin, Texas. (Photo by Ezra Shaw/Getty Images)

By Christopher Powers
For the first time in more than a decade, a skins game will take place on the PGA Tour, this one featuring four of the biggest names in golf. On Monday, Oct. 21, Tiger Woods, Rory McIlroy, Hideki Matsuyama and Jason Day will go head-to-head in “The Challenge: Japan Skins,” a high-profile, live competition presented by GOLFTV.

While the event will somewhat mimic “The Skins Game,” which took place on the PGA Tour from 1983 to 2008, it is a completely new and unique exhibition, one that will feature a number of extra challenges during play. We know there are many more questions surrounding the event, and we attempt to answer them all below.

Here’s everything you need to know about The Challenge: Japan Skins.

Where and when does the event take place?

How can you watch?

The Challenge: Japan Skins will be televised worldwide and available exclusively live and on demand for free for those who register with GOLFTV outside the U.S. Those in the U.S. can watch the simulcast live on Golf Channel beginning at 11 p.m. ET.

How does the format work?

The simplest explanation of skins is the player with the lowest score for each hole wins that hole and whatever amount of money that hole is worth. If there is a tie, that “skin” carries over to the next hole, and so on. For example, if two of the four players tie on the first hole, there are now two skins up for grabs on the second hole, and any of the four players can win them. Once a skin or multiple skins are won, the next hole goes back to being worth one skin.

If the 18th hole is tied, a sudden-death playoff will be employed to determine who wins the final skin. However, if there are multiple playoff holes, the value of the skin will not multiply, unlike the first 18 holes. It will still just be the one final skin.

How much is each skin worth?

The purse for The Challenge: Japan Skins is $350,000 and will be distributed as follows:

What are the “extra challenges”?

Just like The Match between Tiger Woods and Phil Mickelson that took place last November, The Challenge: Japan Skins will feature extra challenges other than just the skins portion during play. These “challenge holes” will have additional monetary value that will support the event’s charity partners, as well as add another layer of intrigue to the event.

Details of the extra challenge will not be revealed until the live broadcast of the competition.

__Is there anything else unusual about the event?

In addition to the extra challenge, the one other unique thing about the event is that it is set to finish under floodlights. It’s also the first televised exhibition match of Rory McIlroy, Jason Day and Hideki Matsuyama’s careers.

Have any of the players competing in The Challenge: Japan Skins competed in an official skins game before?

Only Tiger has competed in an official skins event before, playing in the Skins Game numerous times before it was discontinued in 2008. Surprisingly, Woods never won the event, finishing runner-up three times.

Will any of the four players be in the field at the ZOZO Championship?

Yes, all four will be in the field. Jason Day and Hideki Matsuyama will also play in the CJ Cup @ Nine Bridges in South Korea, which will finish the day before The Challenge: Japan Skins.

Who is the favorite to win The Challenge: Japan Skins?

Rory McIlroy is the favourite to win, according to Oddsshark. Here are the odds: