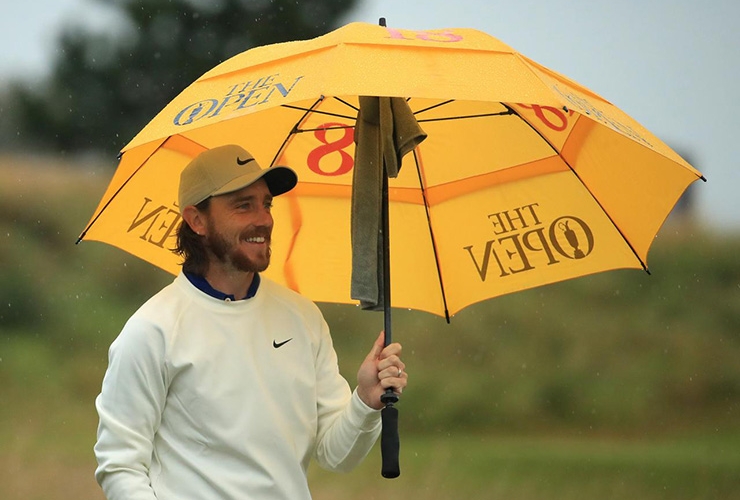 Tommy Fleetwood walks to the first green during third round of the Aberdeen Standard Investments Scottish Open. Andrew Redington

By John Huggan
It was, amidst much doom, gloom and precipitation, a thing of beauty. Hitting shots the old-fashioned way, Tommy Fleetwood somehow manufactured a two-under-par 69 in vile conditions on Saturday to sit two shots off Robert Rock’s lead at the end of day three of the Scottish Open at the Renaissance Club.

It was, quite simply a magnificent effort, full of the sort of imagination and flair many feared forever lost at the sharp end of the professional game. Employing his distinctive, “punchy” action to its best effect in the heavy rain and strong wind off the Firth of Forth, Fleetwood made five birdies and dropped only three shots.

“I think halfway back was just about as far as I could swing,” he said modestly. “And they turned out to be punch shots. You have to pick a shot and try to play it in conditions like that. Wherever it goes, it’s going to go. You have to accept that. For some reason that helps me accept shots. Because I know how hard it is. When it’s like this, there is still a massive emphasis on clubhead control. You have to hit a strong draw against a left-to-right wind for example. Downwind you have to launch it. So it’s all about clubhead control. And I had a really good day today.”

The final birdie came on the 483-yard par-4 18th, the difficulty of the challenge illustrated perfectly by Fleetwood’s thought process as he addressed his approach shot.

“Stood over the ball I was prepared for just about any scenario,” he said with a wry smile. “I could have topped it, shanked it or duffed it and I wouldn’t have been too surprised. Where it went (10 feet from the cup) was the most surprising thing. And from two feet out the putt was going in. I felt like I won the battle with the course today.”

Indeed, it was a fight that shifted more and more in the course’s favour as the rain grew even more intense and the breeze stiffened. Fleetwood’s one-under back nine picked up shots on all of those around him. Most significantly, it was three strokes lower than Robert Rock managed.

“I loved every minute of it,” Fleetwood insisted. “It’s golf isn’t it? I’ll play in that every day. I’m really happy and the birdie on 18 left me feeling really good. I was grinding all day. But an occasional look at the leader board helped. I saw everyone was doing the same. It was a day when three pars moved you up. And every birdie was like gold dust.”

The best of Fleetwood’s 34 inward blows both came at short holes. At the short 12th his 5-iron tee shot finished no more than four feet from the flag, a feat that impressed his hard-to-impress caddie, Ian Finnis. Fleetwood made par there, but an even better result came two holes later, when he birdied the next par 3.

“The tee shot there was interesting,” said Fleetwood. “Finno gave me the yardage but there was no point in even discussing what club it was. It was ‘pick a club and create something.’ I looked up and it was nice to see where it was going. Those two tee shots were the best shots of the day for sure. And they came at the good time. I’d missed a couple of putts not long before. But nothing was easy; everything was hard.”

Indeed, it was day for acceptance, for patience and for finesse. Fleetwood displayed all three.

“I consider my acceptance an asset,” he said. “Yes, the rain was pretty relentless. And normally when it’s like this you can’t play. The rain never stopped for even half a second. Then it just got progressively worse. But nothing out there phased me and Finno. The prize money we play for means even days like this has compensations. It was so bad near the end we were laughing about it. If you can handle yourself in these conditions you should be proud of yourself. And hold your head up. You have to give yourself a pat on the back sometimes. And I deserve one today. Besides, my ultimate dream is to win the Open and I might have to do it on a day like this.”