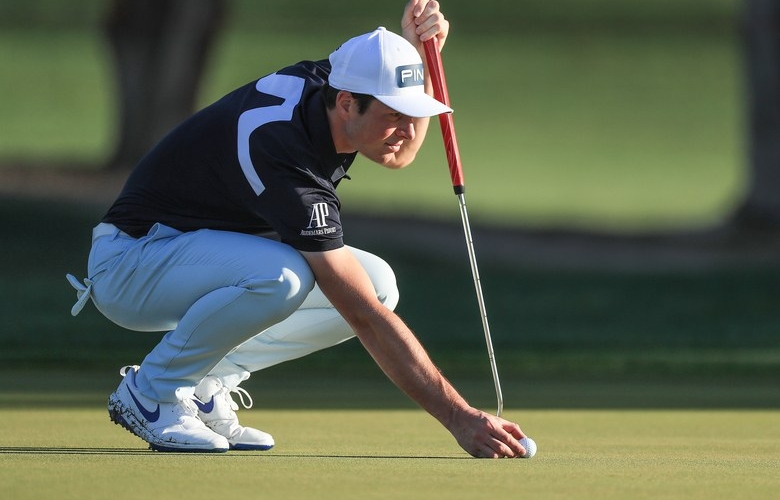 Viktor Hovland was one of only three players in the Abu Dhabi HSBC Championship to receive a bad time under the European Tour’s new pace-of-play policy. (Photo by David Cannon/Getty Images)

By John Huggan
It is early to be sure, but initial signs would indicate that the European Tour’s new and more stringent pace-of-play policy is having its desired effect. In a meeting with members of the media at last week’s Abu Dhabi HSBC Championship, senior referee Andy Macfee outlined the data amassed over the first two days of the tournament. On both, the 132-strong field got themselves around the 7,642-yard layout quicker than they had, in similar weather, one year earlier. (Comparisons drawn from the weekend play were impossible; 12 months ago the competitors played in two-balls, this year three-balls were needed).

“In the first round, play was ten minutes quicker,” revealed Macfee. “In the second round it was six minutes quicker. On average, the first round took four hours, 34 minutes (three minutes over the recommended time) and one day later it was the same. Perhaps even more importantly, the flow of play was brilliant. The players were definitely more aware of how long they were taking to hit. The absence of waiting for the group in front to move on drew favourable comments from just about every competitor. And we want them to get used to that going forward.”

Still, best not to get too carried away. As Macfee was quick to emphasize, the reduced size of the field last week (lack of daylight meant a field of 132 rather than a full-size 156) did bring certain advantages. For one thing, when the first groups out on either side of a two-tee start reached their tenth tees, they were not forced to wait. That is all but impossible when the field is bigger. Knowing there will be an inevitable delay at the turn, does, according to the veteran official, apply something of a subconscious brake to proceedings.

“The only way to really improve flow over the first two days is for us to put space into the course,” said Macfee. “And the only way to do that is by reducing the field. Which is tough for us to do as a members organization (translation: turkeys do not vote for Thanksgiving). After the cut we do have another option. This week we used an 11-minute interval between groups rather than 10. We will be doing that whenever we can.”

Surprisingly perhaps, but certainly impressively in the first week of this new and unfamiliar initiative, only three bad times were given out over the four days in Abu Dhabi. Previously, those misdemeanours would have been scrubbed at the end of each round. But now they are carried forward. A bad time on Thursday and another on Sunday, for example, means a one-shot penalty. And regular offenders will also face the prospect of heavier fines.

All of which seems to be having an effect. Although a handful of the usual suspects – no names but they know who they are – did come close to taking too long, they stayed just within the limits. In fact, only one breach was perpetrated by a player familiar with the European Tour. On day one rookie Viktor Hovland took 59 seconds (the prescribed limit is 40 seconds) to hit a putt on the 13th green. During the same round, local amateur Ahmed Skaik loitered over a shot on the second hole for 109 seconds (59 seconds over). And on the final day South African Erik Van Rooyen spent six seconds too long weighing up his approach shot.

“Viktor’s problem was that he took too long to get the line on his ball pointing exactly at the hole,” said Macfee. “But it was explained to him where he went wrong. He clearly listened. One day later we went back to check and he was much improved.”

Indeed, it was difficult to find even one dissenting voice amongst the players. Former Ryder Cup captain Thomas Bjorn – also a long-time chairman of the player’s tournament committee – was just one who had nothing but good things to say about the new initiative.

“Pace of play has been great this week,” said the Dane. “There’s not been much moaning, either. It seems like the players have said to themselves, ‘well, this is it.’ It was important that our referees were proactive. They have had many good conversations with the players. Without naming any names, the refs have singled out those they know are slow and had big conversations with them. So there has been a good feeling as everyone tries to get on with it. Hopefully, this solves a problem that has been in the game for a long, long time. If nothing else we are sending a good signal to the world that we are taking this seriously.”

The chats Bjorn refers to have taken place over the last few months. As Macfee pointed out, there is more to this than just players playing slowly. Other factors were coming into play. Ignorance of basic rules was one of the most prominent – and irritating. Too often, referees were being called out to adjudicate rulings the players really should have been able to sort out for themselves. So education on the seven or eight basic rules was required.

“We now have mandatory rules testing for every player on tour,” continued Macfee. “They get two chances to pass and if they don’t, either myself or (chief referee) John Paramor will be wanting to know why. We will sit them down and analyze where they are going wrong. It’s funny though. Everyone seems to be taking it seriously. Every time I’ve gone into the player’s lounge this week I’ve been stopped by someone and asked about one of the questions in the test. So it’s a talking point.”

As an extension of that interaction, the tour has instituted what might be termed a “pod system,” where new members from the qualifying school and the Challenge Tour have been placed in groups of eight and assigned a referee they can approach with any issues.

“Because we don’t have the resources, we can’t have as many officials on the Challenge Tour as we do on the main tour,” explained Macfee. “Because they are placed under less scrutiny, it is, therefore, easier for players there to develop a slower game. Those are the guys we have been talking to. The sooner they realize they have to play quicker, the better.”

Not a bad motto for any tour, come to think of it.