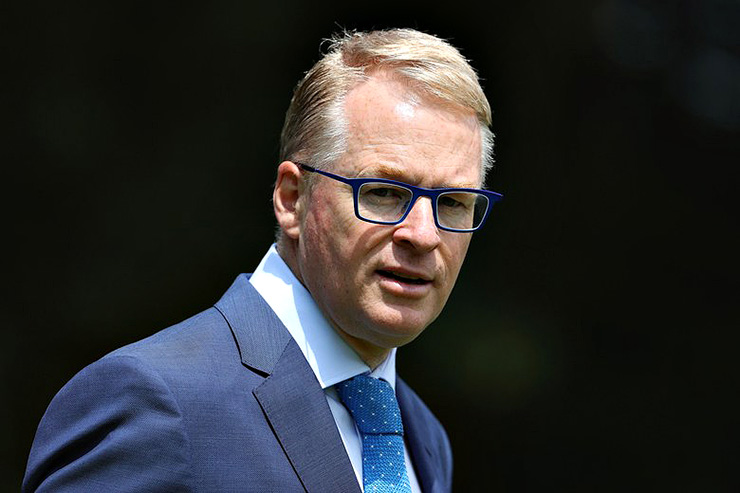 By John Huggan
It wasn’t the most formal session of his administrative career. Nor was it, at least initially, the most comfortable. But seated amidst a small group of journalists in the media centre at the Turkish Airlines Open, European Tour chief executive director Keith Pelley opened himself up to a generally friendly interrogation.

“I’m happy to answer questions on any topic,” he said. “But I want to start with Saudi Arabia.”

And why not? Further to the recent murder of journalist Jamal Khashoggi inside the Saudi consulate in the Turkish capital of Istanbul, the European Tour has been under pressure to justify the continued presence of the inaugural Saudi International tournament on the 2019 Race to Dubai schedule.

“Like many global companies we monitor situations like this,” Pelley said. “So we have looked at the viability of the golf tournament. I can simply say that the Saudi International is on our schedule for 2019. I really have nothing more to add than that. The Middle East is very important to the European Tour.”

Indeed, as many as five other Middle East events—the Abu Dhabi HSBC Championship, the Dubai Desert Classic, the Oman Open, the Qatar Masters and the season-ending DP World Tour Championship—are all slated to join the Saudi event on next season’s 50-strong tournament roster. Two, Abu Dhabi and the DP World, are Rolex Series tournaments worth a minimum of $7 million each. So Pelley was not under-selling the region’s value to the tour.

Further questions followed. To which the eventual answer was always the same: “the Saudi International is on our schedule for 2019.”

No, no consideration has been given to cancelling the event.

No, not one player has expressed any misgivings about the event.

No, there has been no dialogue with the Saudi Arabian Golf Federation.

No, there has been no conversation with the U.K. government.

No, no other European Tour sponsors have expressed any misgivings about the event.

“I have had no dialogue with partners, our own government, or the SA federation,” Pelley said. “The event is on our schedule.”

Moving right along, Pelley was clearly a lot more comfortable talking about something other than Saudi Arabia. Like so many administrators he is a pseudo-politician, able to prattle on almost endlessly on subjects likely to shine a positive light on his organization.

Next up was a mildly interesting chat regarding the Rolex Series. Using the average—and often disappointing—World Rankings of the fields as a guide, is the sponsor getting value for money? “Of course,” said Pelley.

“The media value is not all about World Rankings,” he continued. “I don’t evaluate fields strictly on World Rankings. Take the recent CIMB Classic on the PGA Tour versus our British Masters. Which had the strongest field?

“If you look at the World Rankings, you would say the CIMB. But the British Masters had Justin Rose, Francesco Molinari and Tommy Fleetwood, three of the top-15 players. CIMB had one, Justin Thomas. They had more in the top 30 and top 50. They also had Ernie Els. But we had four former World No. 1s, Rose, Lee Westwood, Luke Donald and Martin Kaymer. Plus, a three-time major winner in Padraig Harrington. So from a consumer’s perspective what is the better field? What resonates more with consumers? Players like Lee, who has won events in 19 different countries.”

Inevitably, attention turned to the Ryder Cup, a subject never far from any European Tour official’s mind. The recent event in Paris was, according to Pelley, a resounding success quite apart from the Old World’s emphatic victory. And he was at pains to underline the fact that recent rumours regarding the sustainability of the 2022 match Italy are just that—rumors. OK, the course being built at the Marco Simone Country Club near Rome is behind schedule, but nothing has changed, and the event will not be going to Ireland or The Belfry or anywhere else.

“I’ve said along, the 2022 Ryder Cup is going to Italy,” Pelley said. “Our design team is there on a weekly basis. Construction is underway. People talk about problems, but they are nothing but speculation. We have had discussions about the opening ceremony being held in the Colosseum. Serious conversations with Italian decision makers and officials. It’s going to be spectacular.” Well, it will be if the opening ceremony is actually held in the Colosseum four years from now. But take a closer look. Pelley wasn’t saying the deal is done, only that talks have been held. The results of those talks remain unknown. Slick. He really is a good politician.