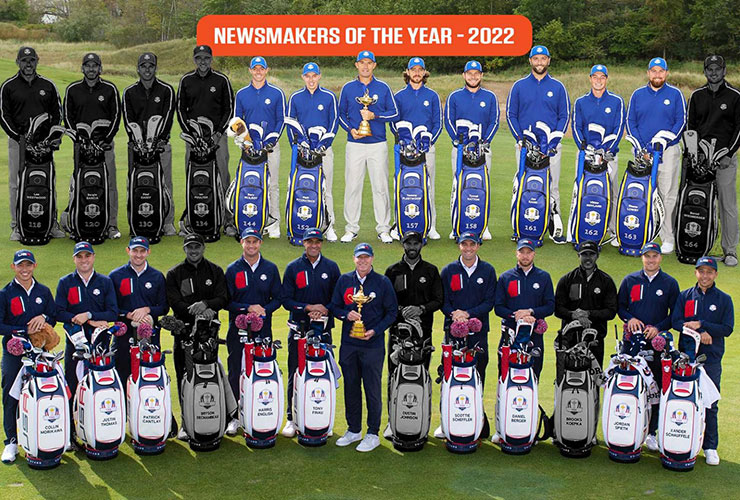 By John Huggan
Some history. Over the nearly half-century that it went by the European Tour rather than the DP World Tour it has become, the circuit’s relationship with the Ryder Cup has undergone a dramatic about-face. When the team was filled with those hailing from ‘Great Britain & Ireland’, the biennial contest with the United States was nearly irrelevant. The result was almost entirely predictable — an American victory — and, even more crucially, there was no real cash to be made on either side of the Atlantic. Few outside golf’s inner-circle cared, so hardly anyone, especially in the States, bothered to watch.

Things began to change when, led by the likes of Seve Ballesteros and Bernhard Langer, continentals joined the fray and GB&I became ‘Europe’. The matches soon enough became truly competitive and, attention peaked, spectators, sponsors and just about everyone else began to pay close attention. The Ryder Cup was reborn, as were obvious money-making possibilities.

Today, it is well-known that the DP World Tour’s reliance on the proceedings generated from a ‘home’ Ryder Cup is huge. Every four years, the money made funds the next four years of tour operations. So maintaining the profile of what has become the biggest thing in golf outside of the four major championships is clearly high on chief executive Keith Pelley’s priority list.

For long enough, that was hardly an issue. The Ryder Cup’s popularity and ability to make millions was unquestioned. But, as it did in so many aspects of the professional game, the emergence of LIV Golf in 2022 has threatened the continuation of that happy status quo. Should enough of Europe’s leading players find the lucrative temptation of the tour too strong to resist, the Ryder Cup would be in danger of regressing into the glorified garden party it once was.

But it hasn’t happened. Not yet. At least in terms of the make-up of its future Ryder Cup teams, Europe and the DP World Tour has so far emerged relatively unscathed. Of those who have made the move to LIV — and essentially taking themselves out of play to compete in the matches moving forward — it’s likely only Sergio Garcia and Paul Casey had one more appearance in them. Others like Lee Westwood and Ian Poulter were almost certainly finished with the playing side of the contest in which they had performed with such distinction over many years.

The same, of course, cannot be claimed by the American side, albeit their larger pool of potential players allows it to comfortably absorb the absence of star names such as Bryson DeChambeau, Brooks Koepka and Dustin Johnson, starting next September in Rome when the US tries to end a 29-year winless streak away from home. 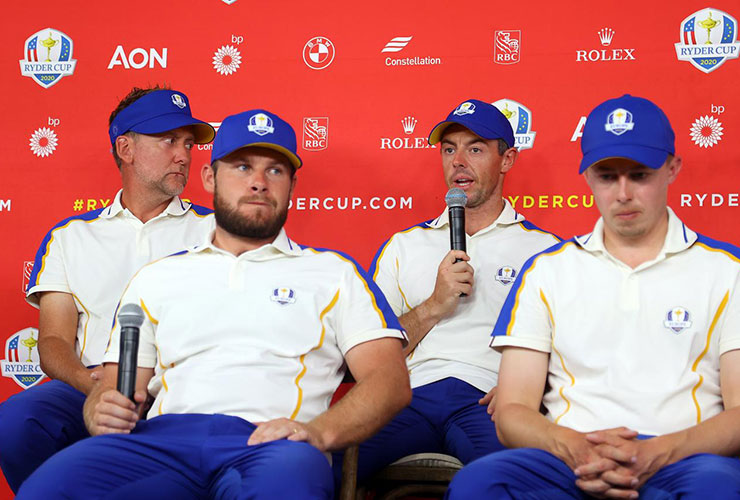 Ian Poulter, Tyrrell Hatton, Rory McIlroy and Matthew Fitzpatrick appear at a press conference after Europe’s loss to the US in the 2021 Ryder Cup. Andrew Redington

“I’m excited,” says Jon Rahm, the 28-year-old Spaniard expected to be a much-relied-on member of Team Europe for years to come. “There have been some challenges on the way, but we are going to have a new core of young players like Bob MacIntyre, Thomas Detry and the Hojgaard twins, Rasmus and Nicolai, who will only add to the strength of the next squad. We have been relatively unscathed by LIV. The Americans have lost players. But when you look at the rankings, they can afford to do that. They can still fill a really strong 12-man team. We will too, but with players who are perhaps not as well known, certainly in the States.”

Indeed, what Rory McIlroy calls the seven-strong ‘core’ of the 2023 European side that will line up at the Marco Simone Country Club — himself, Rahm, Tommy Fleetwood, Tyrrell Hatton, Shane Lowry, Matt Fitzpatrick and Viktor Hovland — remains intact and untouched by LIV. Throw in the likes of Sepp Straka and Seamus Power, both winners on the PGA Tour over the last 12 months, and Irish and Australian Open champion Adrian Meronk, and optimism abounds that Europe can quickly dismiss the heavy 2021 defeat at Whistling Straits as a mere blip rather than a bleak sign of things to come.

“We will have some guys everyone would want and expect to be in the team,” says Fitzpatrick, the reigning US Open champion. “But outside of that, we need guys to step up. They have another year to get ready, get better. It will be interesting. And a couple of surprises will probably emerge.”

Lowry is another looking on the bright side, to the extent that the Irishman can even draw positives from that 19-9 thumping just over a year ago. “If you look at last year, we just didn’t play well,” says the 2019 Open champion. “I’ve thought about it. We lost by 10 points. That’s only five games over the course of three days and 28 games. It’s not like we were slaughtered.

“I especially like the winners we had over the last few weeks since the qualification started,” Lowry continues. “There will be a bit of a changing of the guard. But we’ll have a good number of veteran players to which we can add a good group of younger lads. They all have another year to get better. I’d like to see them get over to the States to compete in some of the big events over there. When you think about it, though, anyone who makes the team will be playing well. And full of confidence. Then it comes down to getting the pairings right and clicking as a team. I am optimistic.” 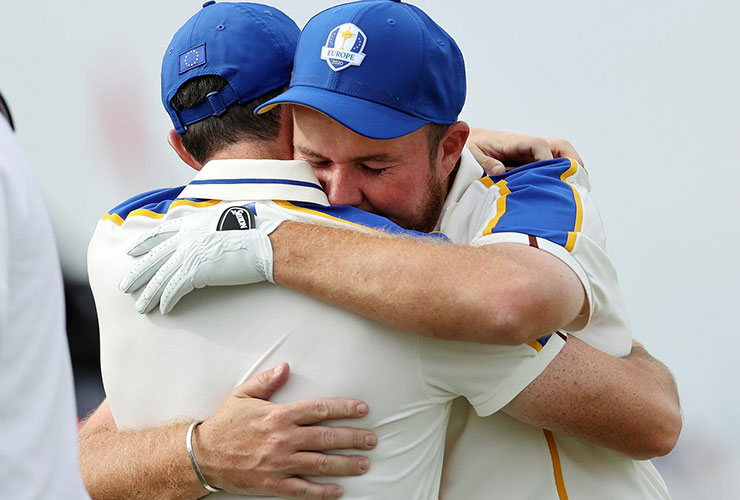 Shane Lowry hugs Rory McIlroy after their defeat to the US in the 2021 Ryder Cup. Warren Little

Looking further ahead than 2023, where Europe’s Ryder prospects are certainly going to be negatively affected is with the captaincy. The likely line of succession would surely have seen Westwood, Poulter, Garcia, Graeme McDowell, Casey and Martin Kaymer all vying for the position. Now, the ability to rely on Ryder Cup veterans to fill the role has been greatly altered.

Already, LIV has had an impact, of course. Former World No. 1 Luke Donald will lead the home side in Italy next year knowing for sure that he was not the first choice for the job. In what turned out to be a disappointingly messy affair, the Englishman was handed the honour only after the removal of former Open champion Henrik Stenson after he joined LIV.

Still, at least on the surface, the much-vaunted team spirit that has been such a feature of European sides over the years — even in defeat — appears to have emerged unscathed from any recent unseemliness. Already, Donald has amassed a trio of assistant captains who will all do their bit on that front.

Edoardo Molinari is the “stats guy”, a role he already fills for number of European players, most notably Fitzpatrick. Nicolas Colsaerts will surely be the unofficial social convenor behind the scenes. And there isn’t much 2018 captain Thomas Bjorn doesn’t know about the Ryder Cup, on and off the course.

During the recent DP World Tour Championship in Dubai, Donald hosted a dinner attended by a mixture of sure-things and likely members of the side he will lead next September. McIlroy, for one, emerged from that meal with his appetite for the battle to come unaffected. A veteran of six Ryder Cups — and an emotional “failure” last time out — the Northern Irishman will almost certainly be Donald’s “captain on the course” in Italy. Given his stature as the best player on the team, it is a role he was born to play and one he clearly embraces fully.

Indeed, McIlroy knows his importance to the team, both emotionally and statistically. Amid the carnage at Whistling Straits, his failure to win any of his three matches was, at least in theory, responsible for the six-point advantage with which the Americans entered the final day singles. Three wins instead of those three McIlroy defeats and the sides were all-even with 12 matches to play.

“I was absolutely dreadful at the last Ryder Cup,” McIlroy says. “If the guys who are playing five matches — our core — play well and win most of their points, things become easier for the rest of the team. But you want to rely on all 12. One of the great things about the American team right now is its depth — one through 12 is amazing. But we’re not too far behind. ‘Rosie’ [Justin Rose] looks like he is starting to play well again. It would be great to see Francesco [Molinari] back in the team. Our core group is really strong. We will have home- field advantage. So we will know the course a bit better than the Americans. I’m bullish about our chances. It’s going to be great.”

That remains to be seen, of course. The threat of further LIV departures continues to hang over everything. But, perversely, that could be beneficial from a European point of view. The last word belongs to Fitzpatrick, tongue only slightly in cheek: “It would be nice if the Americans lost another couple of guys to LIV.”