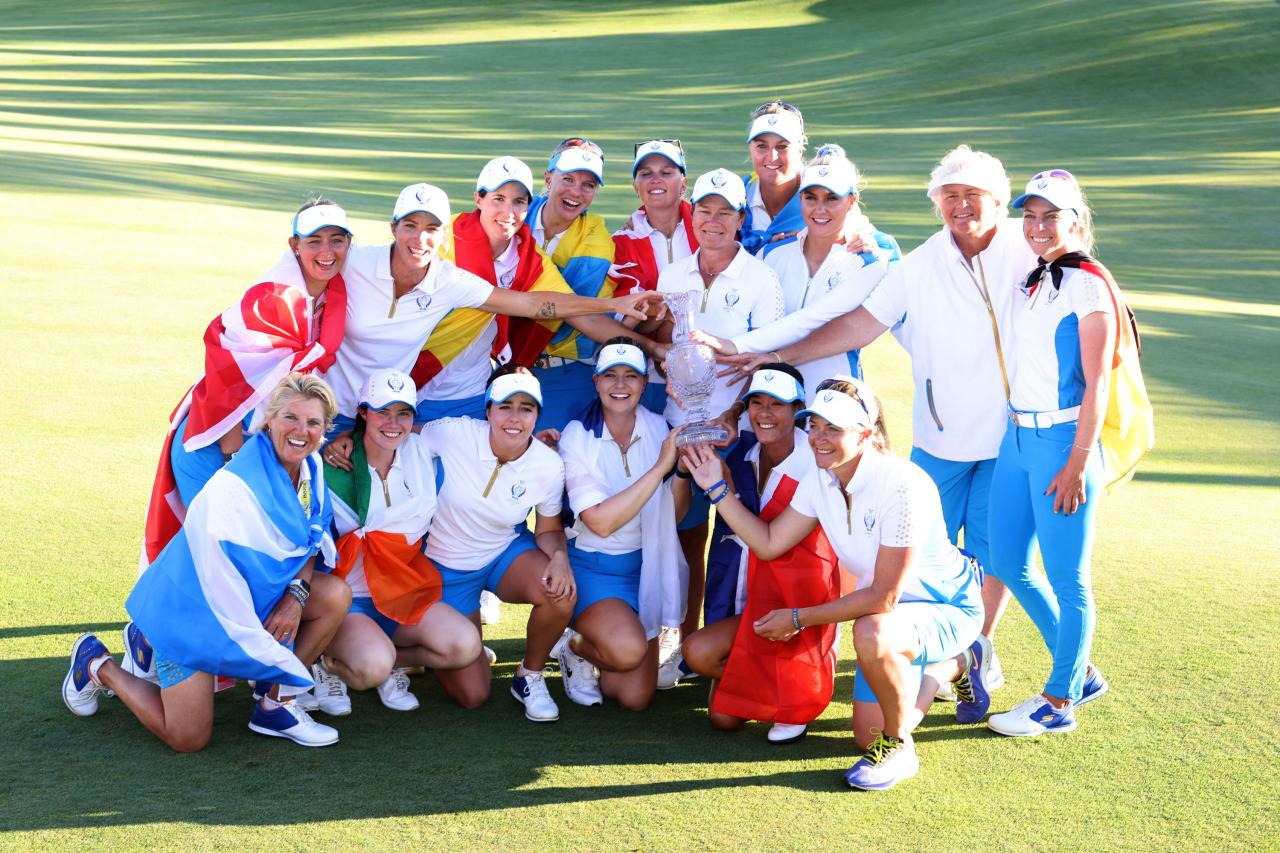 By Dave Shedloski
TOLEDO, Ohio — “This is what victory smells like,” shouted an enthusiastic American fan parked beside the second tee Monday afternoon at Inverness Club as bright young U.S. Solheim Cup rookie Jennifer Kupcho marched after her tee shot. There was definitely something in the air. Turned out to be a barbecue.

On a balmy and sun-drenched Labor Day in the Glass City, the Europeans cooked up an upset of their all-too-friendly American hosts and retained the Solheim Cup with an easier-than-it looks 15-13 victory. This might have been a holiday weekend for the United States, but it was the European team that got to kick back and enjoy the afternoon.

With three wins and a tie in the first four matches completed, Catriona Matthew’s Europe lineup extended a two-point overnight lead to five and had the luxury of playing with that comfortable cushion. America showed grit to the end, but it largely started to put up a fight only after the bell had essentially been rung.

Rookie Matilda Castren of Finland delivered the key blow, sinking a 12-foot par putt on 18 to hold off Lizette Salas, 1 up, for Europe’s 14th point, ensuring a tie and that it would retain the cup it won two years prior in Scotland. Emily Pedersen of Denmark, winless in her 2019 debut, put Europe over the top with a 1-up decision over Danielle Kang in the anchor match.

“It’s hard to put it into words right now. I think I’m still shaking,” said Castren, 26, who actually made clutch putts on each of the last three holes to improve her record to 3-1-0. “I just knew I was looking at the board, and I knew it was going to be an important putt, and I wanted to make it.”

Europe won for the fourth time in the last six matches and for the second time in history in the U.S. following its victory in 2013 in Colorado. Team USA still leads the series 16-11.

“I don’t know if I can put it in words, actually. It’s not really sunk in yet,” said Matthew, who became the first European captain to win twice and who was a player on the 2013 squad. “Today we got off to such a good start, winning three points in the first few games, and then it looked pretty close. We knew it was going to be close, and then … Matilda obviously holing that fantastic putt on 18 to get her full point, and then Emily closing out on 18 was just dream-come-true stuff really.” 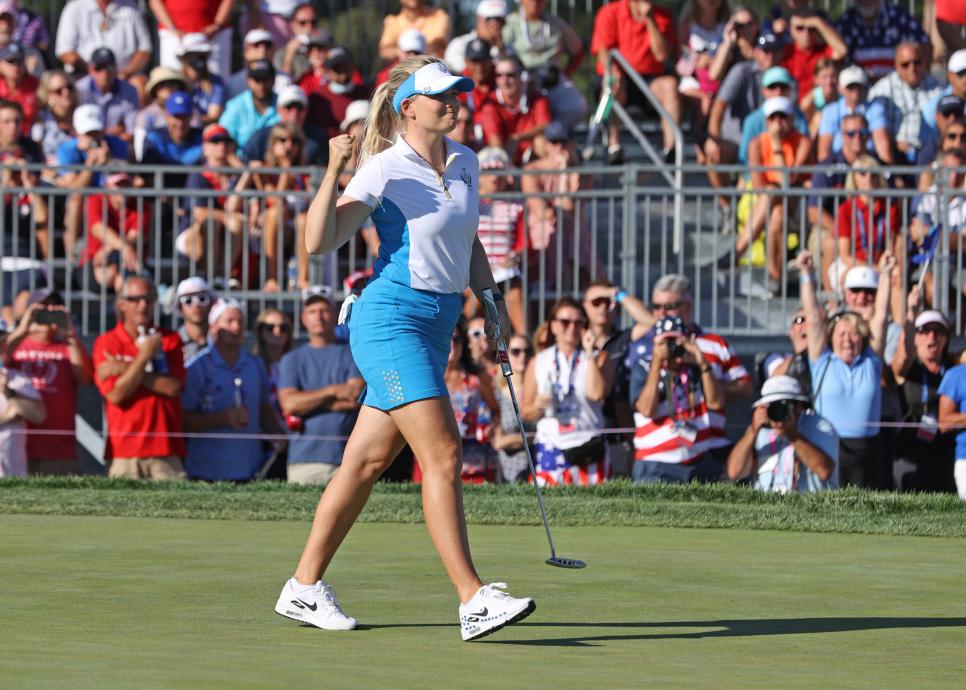 Gregory Shamus
Castren, who wasn’t even eligible for the European team until a LET victory in July, came up clutch and secured the Cup-clinching putt.

Though America had five of the top 17 players in the world to just one for Europe (No. 16 Anna Nordqvist), it was the favored home team that always seemed to be playing from behind. At least that was the case after the first morning foursomes session on Saturday when Europe stole a late 1½ points for a three-point lead it never lost. The Americans never seemed to recover from that psychological blow, let alone the actual blow on the scoreboard.

“I think we got behind the eight-ball the very first foursomes, and that’s just … we fought our way back,” U.S. captain Pat Hurst said. “It’s still pretty close, but it’s not good enough.”

Which explains a lot right there. Europe was better down the stretch, seemingly sinking every crucial putt as 16 of the 28 matches went to the 18th hole. 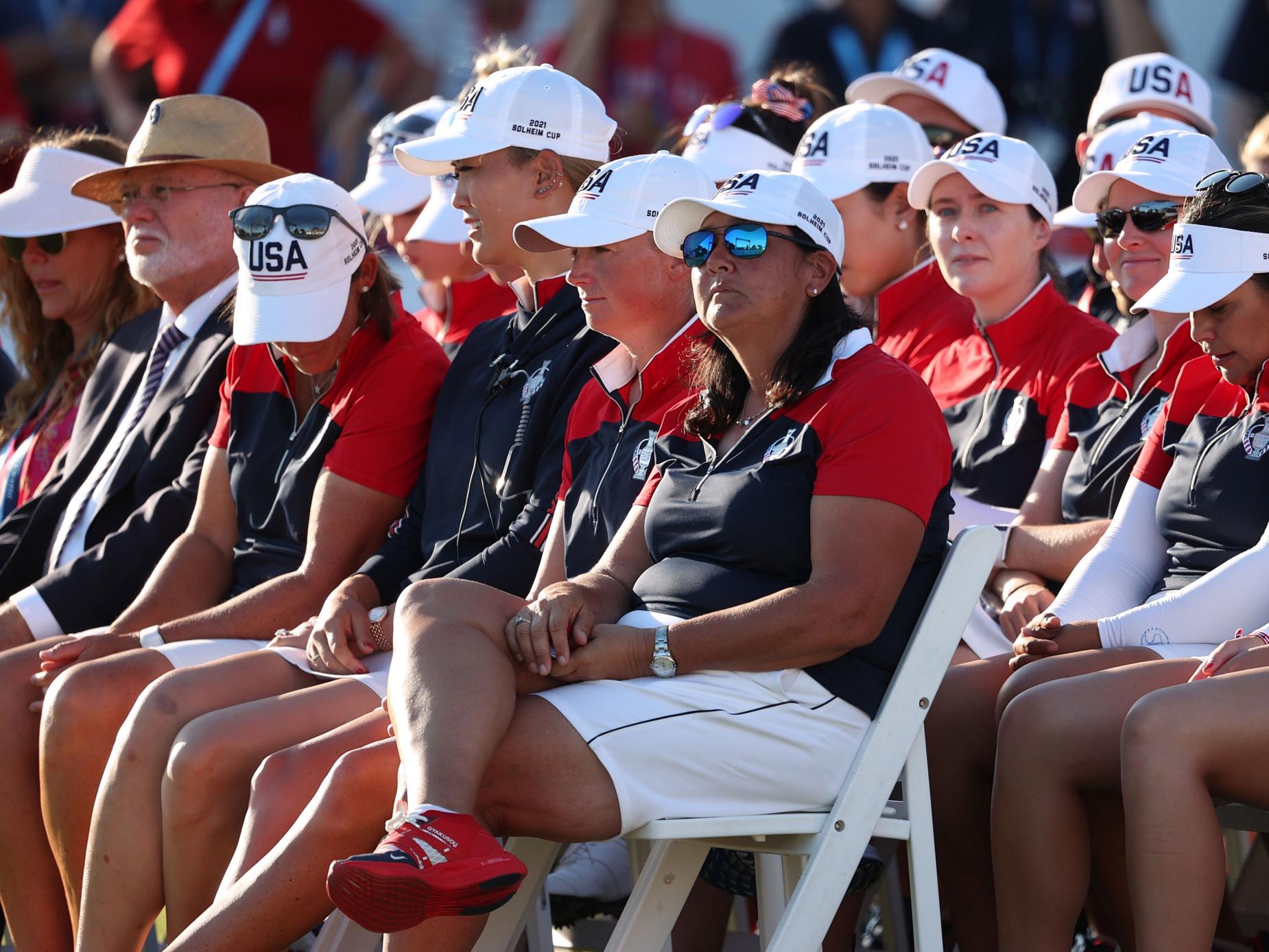 Maddie Meyer
After falling behind in the opening session Saturday, Pat Hurst and her American team could never build enough momentum to take back the lead.

It didn’t help that arguably America’s four best players—Lexi Thompson, Danielle Kang, and Jessica and Nelly Korda— combined for only 5½ points. Thompson was 1-2-1, Kang 1-3-0 and the Kordas, unbeaten two years ago, were 1-2-0 and 2-2-0, respectively.

“This is a really tough golf course,” said Nelly, who admitted feeling extra pressure as the world No. 1 player. “My caddie and I were talking, and even Jess and I were talking. I legitimately played Evian, Olympics, British and then this, so theoretically I’m playing like four major golf courses in a row. So it’s definitely been a little mentally draining because you have to concentrate so much more on these hard golf courses.”

Europe scored the first two points decisively. Ireland’s Leona Maguire completed an impressive unbeaten debut by never losing a hole Monday and dispatching Kupcho, 5 and 4. “I’ve given it my absolute [best] all this week,” Maguire, 26, said after going 4-0-1—essentially matching the point total of Thompson and the Kordas all by her lonesome. “I couldn’t have given it anything more. I couldn’t have asked for a better week.” 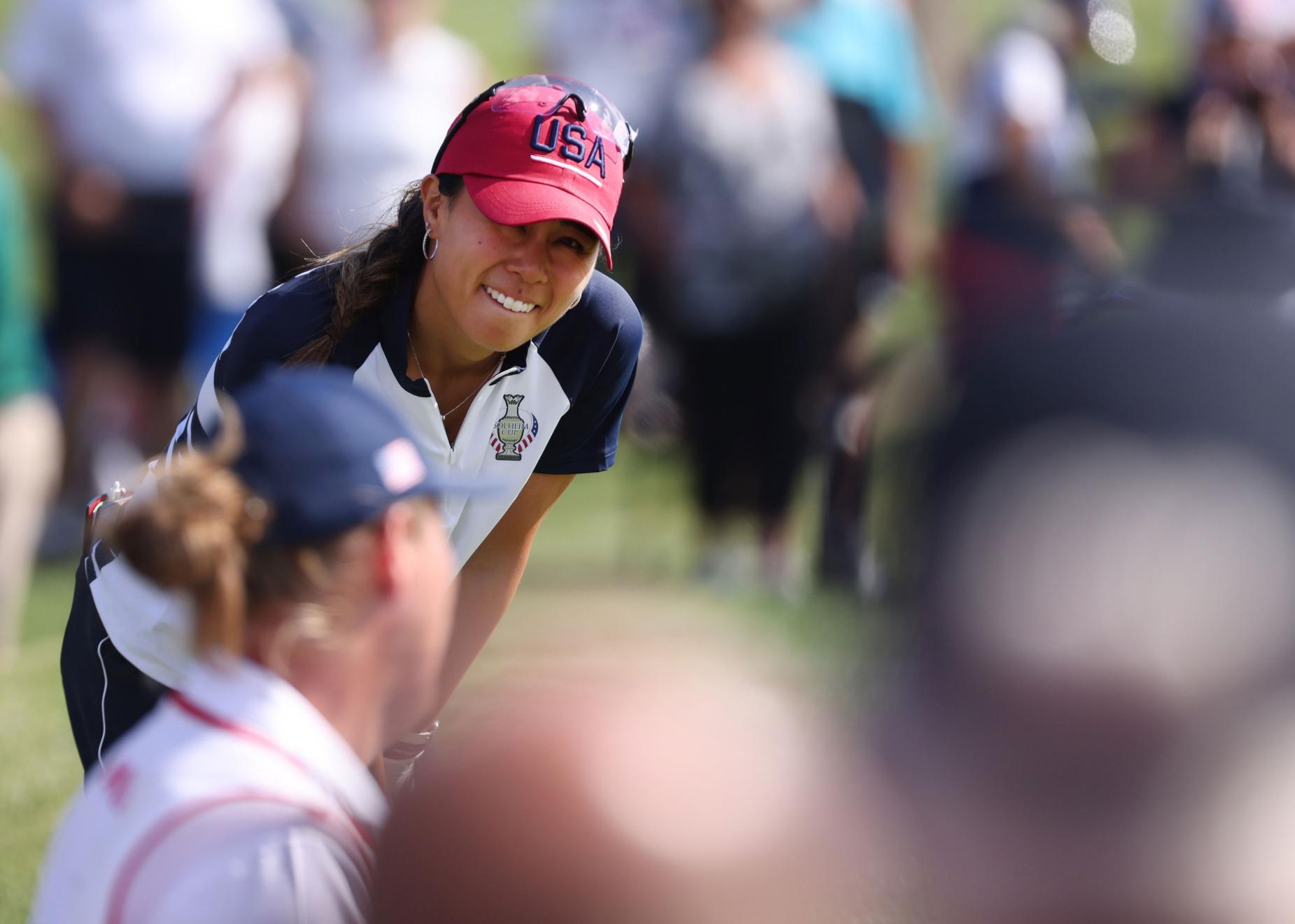 Gregory Shamus
Kang struggled all week, going 1-3-0, including a Monday singles loss in the anchor match.

Soon after, Madelene Sagstrom beat Ally Ewing, 3 and 2, for her first point of the weekend. It was a bit of redemption for the tall Swede, who on Saturday was flagged for a rules infraction that contributed to an American four-ball win. “I needed to be myself, and I really found that today,” Sagstrom said.

Celine Boutier of France followed with a 5-and-4 takedown of Mina Harigae before Lexi Thompson stopped the losing streak by halving with Anna Nordqvist in the first match starting out.

Nelly Korda collected the first American win when she rallied from 2 down to beat Georgia Hall, 1 up. After Austin Ernst and Nanna Koerstz Madsen tied, Megan Khang and Brittany Altomare got Team USA a little closer. Khang never trailed in beating Sophia Popov, 3 and 2, while Altomare rallied past Carlotta Ciganda, 2 and 1. Popov was the lone player from either side kept off the scoreboard.

Yealimi Noh and Jessica Korda gave the U.S. four straight wins, but it only made the result more respectable after Castren delivered the deciding blow.

In addition to America’s seeming advantage in the world rankings, the Europeans had to overcome a gallery that was more heavily in favor of the home team than years past. Though a record 130,000 fans attended the matches, the usual contingent of European supporters didn’t make it to Inverness Club because of the ongoing pandemic and travel restrictions. And who knows how many more stayed away in anticipation of coming to the United States in a few weeks for the Ryder Cup in Wisconsin. “We had to lean on each other this week, and I’m really proud of everyone for believing in themselves and for pulling through,” Nordqvist said.

“We knew it was going to be tough this year with really no European fans, and they just dug in deep,” Matthew added. “Especially yesterday even when the crowds were getting pretty wild, really hung in, came out with a great finish yesterday, and then today great to start with and then it kind of looked a little dodgy, but great play and just so proud of them.

Yeah, they definitely had an air about them.