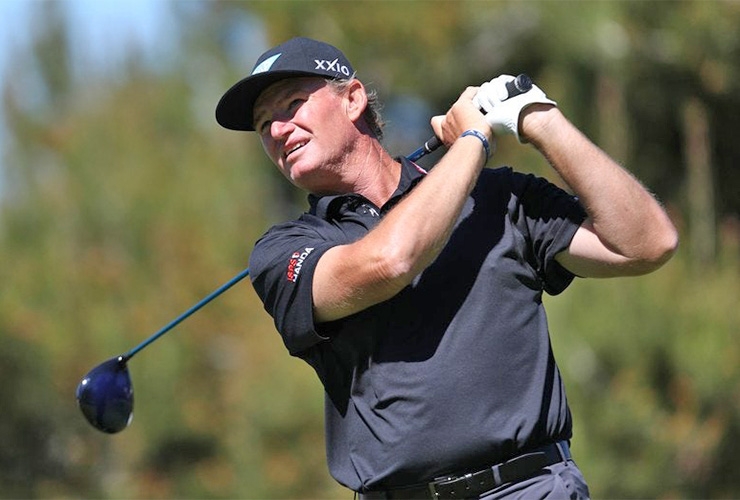 Ernie Els hits a shot from the fifth hole during the final round of the 2020 Hoag Classic. (Jed Jacobsohn)

By John Strege
Ernie Els is a World Golf Hall of Famer who was eager to rejoin his contemporaries on the PGA Tour Champions, though they might have preferred he continued competing against the younger generation.

In only his third start on the senior tour, Els won the Hoag Classic at Newport Beach (Calif.) Country Club on Sunday. In his senior debut in January, he tied for second in the Mitsubishi Electric Championship, losing in a playoff.

“It was pretty tight, you know?” Els said. “I felt a little uncomfortable on the greens. I didn’t have that free-flowing feeling, I had to work hard for it and that’s a good thing to do, to work hard for something. You don’t want something falling in your lap. I’m glad the first one’s over with and we can move on now and it gets more comfortable after this. After being in a playoff in Hawaii, coming close to winning there, I didn’t want to mess this one up. I had a great opportunity and I wanted to try and take that.”

It was his first victory since 2013, when he won the European Tour’s BMW International Open, a year after he won the British Open, his fourth major championship.

Els finished with a four-under par 67 to finish 54 holes in 16-under par 197, two strokes ahead of Newport Beach resident Fred Couples, Robert Karlsson and Glen Day.

Els, meanwhile, claimed the lead by holing an eight-footer for birdie at 15, then sealed it with a birdie at the par-5 18th hole.

Bernhard Langer (where have we heard this before?) wins again

Langer leads, Lefty lurks and everything else you need to know about the Charles Schwab Cup Playoffs