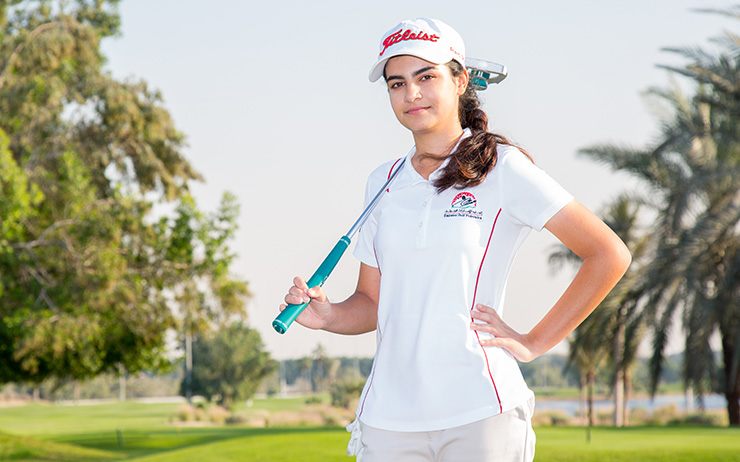 Golf is a walk in the park for Reema Al Heloo, or at least it started out that way.

“I went for a walk with Mum. We thought it was a park but we saw people playing and I liked it.”

Al Heloo was eight when she stumbled upon the game at what was then Al Badia Golf Club. Fast-forward six years and the Emirati 14-year-old is a 12-handicap trailblazer for the Emirates Golf Federation’s (EGF) national women’s squad and Arab women’s amateur golf in general.

Al Heloo’s promise was highlighted when she was named National Player-of-the-Year at the Middle East Golf Awards. It was further reward after she topped the individual standings at the Gulf Cooperation Council (GCC) Golf Championship in Qatar last March to spearhead the UAE to the women’s team title.

EGF coaches Greg Holmes and David Condon, striving to build national fortunes from a junior foundation, are delighted the youngster idolises the Chinese superstar as it gives her a target far beyond the fairways of the Arab golf world.

The EGF wants its players to treat national selection as a stepping-stone to collegiate golf in the U.S. and perhaps even a professional career, not the final destination.

It is bringing in experts such as South African movement specialist Jaike Carter to smooth the pathway and Al Heloo is displaying the necessary work ethic to progress. The promising journey continues.

Editor’s note: The article first appeared in the Feb. 2017 issue of Golf Digest Middle East. Al Heloo has since collected an individual bronze medal at the 2017 GCC Championships in Bahrain. Team-mate Tara Al Marzooqi clinched the individual gold as the UAE successfully defended its ladies title.