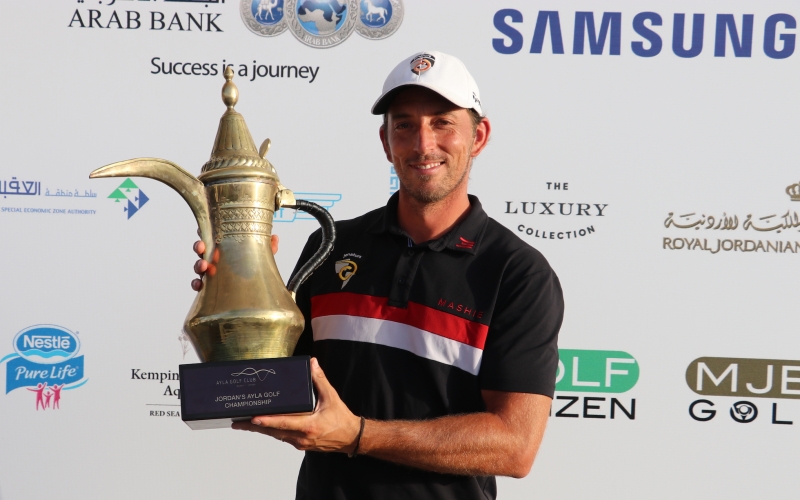 By Kent Gray
Former European Tour player Jamie Elson has ended a 14-year wait for his second victory in a professional tour event and the consequences of the dramatic playoff win could be life-altering.

The 36-year-old sensationally eagled the 54th and final hole of regulation at Jordan’s inaugural $50,000 Ayla Golf Championship to sign for a five-under 68 on Saturday and force a playoff with fellow Englishman Luke Joy who had himself birdied the last hole to finish on 212, -7.

Elson then birdied the second hole in sudden-death overtime from four feet to collect his maiden MENA Tour win and a $9000 cheque but the latter will pale into insignificance should he go on to win the overall MENA Tour title.

Starts in the European Tour’s Omega Dubai Desert Classic, the Maybank Championship in Malaysia, Morocco’s Hassan II Trophee and the PGA Tour’s DEAN & DELUCA Invitational at Colonial CC await Elon who has extended his lead atop the order of merit standings to a healthy 10,033 points over Joy with just two events remaining.

A full Sunshine Tour card for 2018 and exemption to the final stage of qualifying for the Asian Tour also await the MENA Tour champion which would give Elson options and he is also through to the second stage of European Tour Q-School.

Elson waited just three professional events for his maiden pro title at the 2003 Volvo Finnish Open on the European Challenge Tour and went on to qualify for the main tour and the 137th Open Championship at Royal Birkdale in 2008.

Related: Elson has his eyes on the MENA Tour’s biggest prizes

His most notable main tour round was the 63 he carded on the final day of the 2012 Joburg Open, also capped with an eagle on the final hole of regulation, to finish a shot shy of Branden Grace as the South African captured his first European Tour title.

But Elson injury and form issues meant the former Augusta State University player has bounced around the minor leagues looking for his next big break which could now be on the horizon. He did win his second pro title at the 2015 King Hamad Trophy in Bahrain but that was a small one-off event not aligned to any tour.

“I’m quite surprised to win, to be honest,” Elson said afterwards. “I struggled a bit on the front nine, but made a nice birdie on the 9th to get to level-par for the day. Thereafter, I played solid golf and holed putts when I needed to, to get into the playoff (including an eight iron from 185 yards to two feet for the 54th hole eagle).

“The playoff could have gone either way, but I hit some great shots and made putts to get the job done, finally.”

The elephant in Elson’s trophy cabinet had been a MENA Tour title although he told Golf Digest Middle East earlier this year he simply needed to keep knocking on the door after T2 finishes at the 2016 Royal Golf Mohammedia Open and April’s RAK Classic at Tower Link.

“I’m well aware I haven’t won yet, but my finishes have been extremely consistent and I’m sure if I keep playing solid golf it will happen at some point,” he said during the mid-season break. 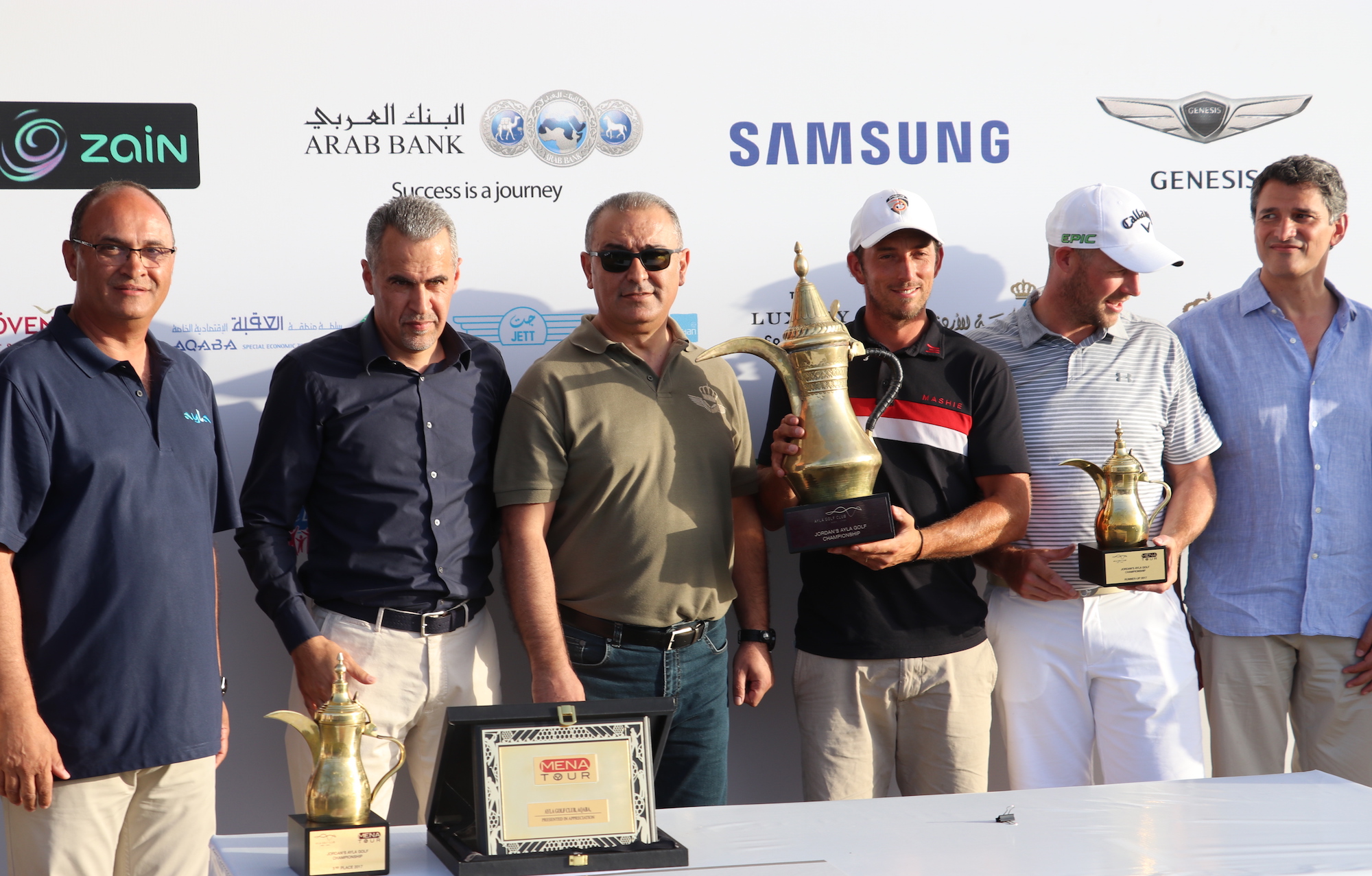 One man’s joy is another Joy’s heartbreak as the man vanished in the playoff came within a whisker of turning around a frustrating 2017 derailed by a bout of malaria contracted during the MENA Tour’s South African swing. Luke Joys final round 72 included an ace on the 12th but he will be left ruing two bogeys and a double in the final round.

Scotland’s Robert MacIntyre closed with a nine-under 64 in his pro debut to set the Ayla course record, eclipsing Swede Henric Sturehed’s second round 67, to move into a four-way tie for third on -6.

England’s Joe Heraty, who carded a bogey-free 68, Italy’s Rocco Sanjust  (67) and Sturehed (73) joined MacIntyre in the group, four clear of the English duo Zane Scotland and Lee Corfield and Sweden’s Fredrik From.

MacIntyre, tied for 15th at the start of the day, eagled the final hole after nailing his nine-iron approach from 168 yards to within nine yards.

“I was far off from the field after a disappointing 78 in the opening round and had nothing to lose. Played a bit aggressively and that approach paid off. I can take a lot of confidence out of the last two bogey-free rounds, a lot of positives,” said the 21-year-old, who hails from Oban, a resort town within the Argyll and Bute council area of Scotland.

England’s Todd Clements, the first round joint leader with Joy, closed with a 72 to share amateur honours with Michael Harradine (Swtizerland) after both finished on +1, 220, well ahead of Saudi Arabia’s Othman Almulla and Jordan’s Shergo Al Kurdi who tallied +13 aggregates.

England’s Mark Chamberlain also had something to cheer about as he aced the 179-yard, par-3 16th with an eight-iron for his first hole-in-one since turning professional in 2011 — and the fifth overall — as he finished tied 47th.

The MENA Tour now travels to Kuwait for the Sahara Kuwait Golf Championship from Oct.16-18, before the field whittles down for the 72-hole, $100,000 Tour Championship at Al Zorah Golf Club in Ajman from Oct. 23-26.