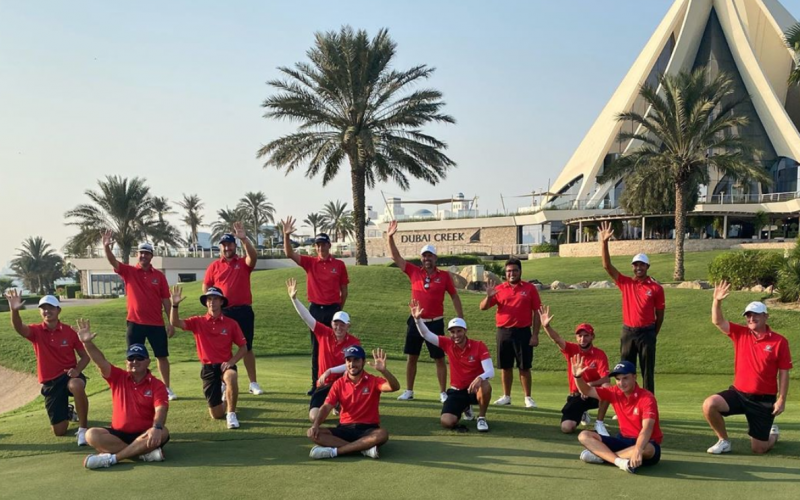 For the fifth straight year the EGF Ams have captured the Dubai Trophy, this time rallying from a two-point deficit heading into Sunday’s singles at Dubai Creek Golf & Yacht Club to retain the trophy 17-15.

EGF captain Steven Kelbrick stacked his line-up hoping to put early scoreboard pressure on Luke Plumb’s pros and it had the desired effect as they won Sunday 10-6. England schoolboys’ international Josh Hill (Trump Dubai) sparked the comeback, a comprehensive 3&2 victory in the first match out over UAE PGA Matchplay champion Michael Major (Dubai Creek) sealing an unbeaten record for the teen and sending a message of hope through the amateur ranks.

A few swings from today’s #dubaigolftrophy Josh again managed to finish his singles with a win of 3&2. With 3 good shots again and 3 good putts!👍👍🙏 Finished weekend with 3 out of 3 points and a winning team! @robwattsperformance

Making the most of home course knowledge, Creek Ams Bayhaan Lakdawala and Max Burrow duly made it a perfect top order start with 2&1 triumphs over Tom Buchanan (Al Ain) and Jackson Bell (JGE) respectively. Louis Gaughan (Pro Sports) battled for a noteworthy half with Welsh schoolboys’ international Toby Bishop (Trump Dubai) but Arjun Gupta made it 4.5 out of a possible five points with victory over Steven Munro, strangely recorded as 3up through 15 but comprehensive nonetheless.

“The strong [EGF] top 5 did a number on us really then we couldn’t quite get the job done through the rest of the field,” said Plumb. “The top 5 gave them loads of confidence.”

Indeed, the UAE Pros had to wait for Dong Lee, at No.6, for their first full singles point after a 2 up victory over Hugo Garcia, a member at Emirates G.C. where Lee works.

There was a block of blue denoting Pro wins lower down the order with Puma Sharma (Pro Sports), David Laing (The Monty) and Malcolm Young securing victories but halves for Williams Xu (Sharjah) and Gordon Munro (Dubai Hills) and a 2&1 win for Barry Pavic (Dubai Hills) at No.16 over UAE vice-captain Michael Bolt (Claude Harmon III) ended any chance for the Pros.

“They seemed to hole more putts and the important putts as well,” Plumb continued. “Yeah, it’s very disappointing but still had a great week. It was a great comeback two years in a row from them but we are getting closer. I can’t fault the guys…everyone gave it their all.”

Kelbrick singled out Hill, Bishop and Pavic, the latter for his performance in the anchor singles match, for special praise.

“Sunday was ‘load the front’, it wasn’t rocket science,” said Kelbrick. “We had faith in the depth of the team.

“It was obvious that they would lead with Mike Major so we put trust in Josh [Hill]. Once that result was in and the Creek boys got going the momentum was set.”

Kelbrick then summed up the weekend for everyone involved.

“We’re very happy with the result and just so happy that Dubai Golf [who manage Dubai Creek and Jumeirah Golf Estates where the matches were held] and Pro Sports honoured their commitment in a dismal year.”