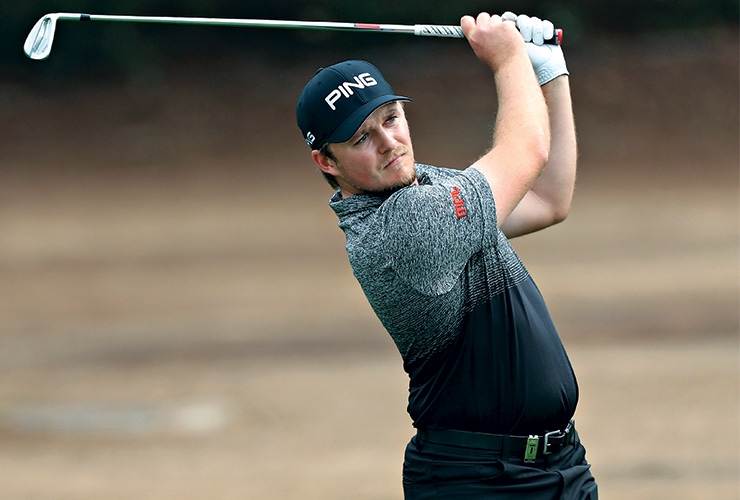 Eddie Pepperell of England plays his second shot on the ninth hole during the second round of the Omega Dubai Desert Classic on the Majlis Course at The Emirates Golf Club on January 24, 2020 in Dubai, United Arab Emirates. (Photo by David Cannon/Getty Images)

The stage is set then for an absorbing moving day at the 31st OMEGA Dubai Desert Classic, one that will also include Lee Westwood after the freshly-minted Abu Dhabi champion courageously snuck into the weekend on the +2 cutline.

An early 67 on Friday, to go with his opening 69, saw Pepperell set the clubhouse target at -8 by lunchtime of the second round and hold onto it all the way to dusk at Emirates Golf Club.

DeChambeau improved a Thursday 70 by three strokes but left a lot of putts out on the Majlis in his 67 as he chased down Pepperell. The 26-year-old American’s title defence is still very much on target though as he nestled into a three-way share of second with car crash escapee Dean Burmester (68) and Swedish half centurion Robert Karlsson (68), a shot adrift of Englishman Pepperell.

Fleetwood shifted gear a day ahead of the clichéd moving day, recovering from a three-over 75 with a flurry of eight birdies in a Friday low 65. Just four adrift of Pepperell, Fleetwood has raced from outside the cutline into genuine contention in a share of 11th place.

After starting the day six over, Westwood’s fightback was equally gritty, a birdie-birdie finish, the last with a brilliant 3-wood and two putts at 18, capping a colourful two-bogey 68. Danny Willett also mustered a final hole birdie to squeeze in on the bubble but five other former champions – Alvaro Quiros, Rafa Cabrera Bello, David Howell (all +5), Stephen Gallacher (+6) and Haotong Li (+10) weren’t so lucky.

Major champion Graeme McDowell (+3) also has the weekend off, along with MENA Tour phenom Josh Hill (+10) after a pair of 77s.