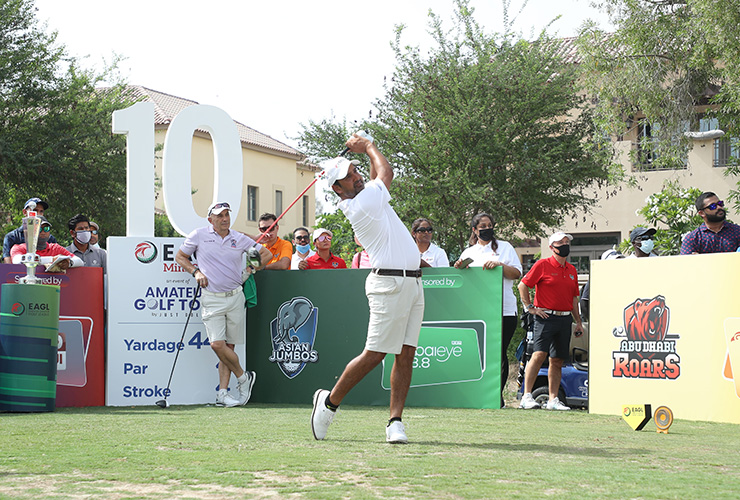 By Kent Gray
Indian businessman Sudesh Aggarwal dreamed the Emirates Amateur Golf League (EAGL) into reality with the goal of spicing up the stock standard corporate day. On the evidence of Sunday’s ‘Mini-Series’ dress rehearsal at Jumeirah Golf Estates – and social media since – the EAGL looks a winner for the region’s amateurs and as a business concept.

As with any new undertaking, there are wrinkles to iron out before the league proper launches in November but for a high-powered endorsement, look no further than Robert ‘Bobby’ Fiala’s Facebook page.

The Emirates Golf Federation Operations and Marketing Manager has a vested interest with the EGF officially endorsing the IPL-cricket style franchise league. But the comments from the playing captain for Team Emirati Players highlighted a key reason why Aggarwal’s gamble is set to fly – the live stream footage  from Fire has already begun circulating around the globe.

“…Pretty cool that my dad got to watch in [the] States on Father’s Day,” Fiala wrote of his father Tom.

“Team Emirati Players finished 2nd overall and probably my best nine holes of the year (+1). Looking forward to seeing how this type of format will continue to push the development of golf in the region and worldwide. Well done to all involved.”

That’s a decent commendation and a far from shabby pitch into the Fire’s 18th green. Nice shot Robert!

As EAGL ambassador, Shiv Kapur was on hand to hit the ceremonial first tee shot. The Asian Tour winner and European Tour player reckons the day gave the players a genuine taste of tour life just as Aggarwal envisaged.

“I think it’s fantastic to be able to replicate what a proper tournament feels like,” said Kapur. “I was feeling some butterflies on the first tee, so I can imagine what the amateurs were going through; to be live on TV and the nerves that they feel, it’s very different from Pro-Am. The whole idea of EAGL was to give them the experience of pro tournaments for team competitions so it’s kind of like the Ryder Cup and a Tour event all in one.

“I have never seen an amateur golf [event] like this, not even professional golf across the world. The idea is that team golf is always more exciting than individual formats; the colourfulness, the uniforms, you are playing for a team, it’s a nine-hole shootout…It’s very exciting and I think it’s here to stay.”

Founder and CEO Aggarwal was relieved and happy to have pulled off such an ambitious project.

“It has been quite a challenging thing to do, with the course setup and managing everything, particularly being the first of its kind in the world in the amateur golf,” said Aggarwal. “But it has also been very satisfying and interesting. Everybody’s so happy, including the course management, they have never seen anything like it.”

For the record, MENA Golfers won the Mini-Series title by collecting 10 of a possible 12 points in the 9-hole dress rehearsal. Check out the highlights from Fire here:

If you’ve got some serious time to kill – or had a mate playing – here’s a full replay of the day, all 4hrs and 01min of it. Enjoy:

If you are interested in playing the EAGL from November, register at www.eagl.ae.