Dustin Johnson rides red-hot putter to third-round 68, leads by one at Harbour Town 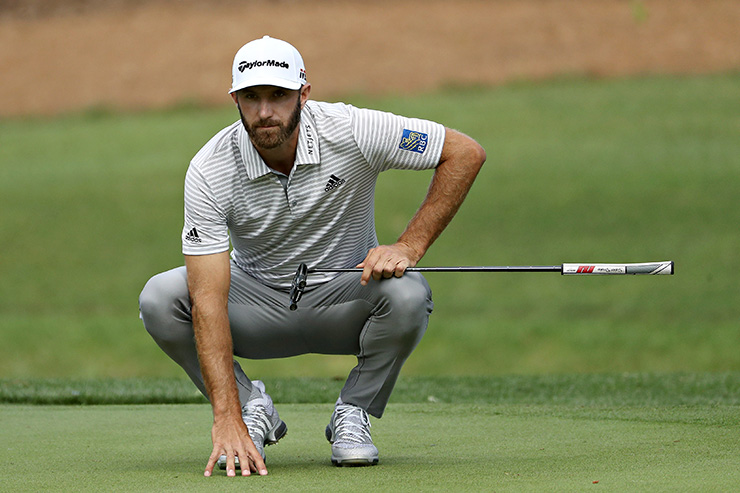 By Christopher Powers
Dustin Johnson hit just five fairways and only 11 greens on a windy Saturday at Harbour Town Golf Links. For most players, those statistics would likely spell doom. Dustin Johnson is not like most players.

Somehow, even in the tough conditions, Johnson managed to shoot a three-under 68, with much of the credit for that going to a red-hot putter. The 20-time tour winner made over 150 feet of putts in his third round, and if he putts half as well on Sunday, he could be raising his 21st career trophy on the PGA Tour in his home state of South Carolina.

“It’d be special, but still got 18 holes of golf and there’s a lot of guys right around the lead,” said Johnson of winning in the Palmetto State. “I’m going to have to go out and play a really solid round tomorrow if I want to win.”

Johnson dropped his first long putt at the par-4 sixth, a 19-footer for his second birdie of the day that got him to nine under. After playing his next five holes in even par, he made an 18-footer for birdie at 13 and then a 47-foot bomb at the par-3 14th that hit the lip, took a little hop in the air and dropped. He knew he got away with one.

“All I could do is laugh at that one.”

He made another at the par-5 15th that got him to 12 under and earned him a three-shot lead at the time. Just when it looked as though he might pull away though, he made back-to-back bogeys at 16 and 17 to fall back to 10 under. At 18, he hit a deft chip from behind the green to a few feet and snuck in the short par putt that eventually gave him the solo 54-hole lead at 10-under 203.

Three players are one back, including Ian Poulter, who fired his second straight 67 despite making a double bogey at the opening hole. Rory Sabbatini and 36-hole leader Shane Lowry are also at nine-under 204 with Poulter.

Patrick Cantlay, who surged to the top of the leader board last Sunday at Augusta, put together a similar round on Saturday in Hilton Head. His five-under 66 tied for the low round of the day and vaulted him into a tie for fifth at eight-under 205.