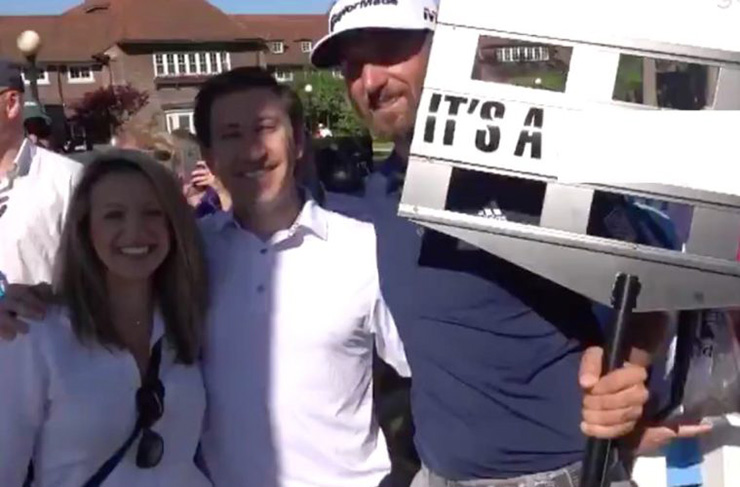 By Stephen Hennessey
Gender reveals are all the rage right now. We’re sure someone you know—a co-worker, a cousin or even just a random person you watched pop a balloon followed by loud yelling and shrieking on social media—has posted one of these videos, announcing the gender of their baby. These videos come in all forms, and as people in 2019 do, everybody must one-up the next person by coming with some outrageous, unique way to create one of these videos.

Thanks to the PGA Tour and Dustin Johnson, a soon-to-be father and mother at this week’s Rocket Mortgage Classic have a video to post on social media that’ll make their entire network of people jealous. In fact, they don’t even have to post the video themselves, because now the PGA Tour’s social media channels, with millions of followers each on Instagram, Facebook and Twitter, everyone will see the video posted of them on Wednesday.

Dustin Johnson, the heavy favourite at this week’s tour stop in Detroit, made this couple’s video as unique as could be. Here it is:

A gender reveal … from @DJohnsonPGA. ?

DJ gave this expecting couple the surprise of a lifetime @RocketClassic.#LiveUnderPar pic.twitter.com/YRaNPRF9ju

It’s not the first time this season a PGA Tour pro has helped a group of fans with a huge life event. At the Wells Fargo this year, Justin Thomas helped a golf fan propose to his fiancée at Quail Hollow.