Dustin Johnson ‘frustrated’ over score of 75 in first round of U.S. Open, cites poor putting 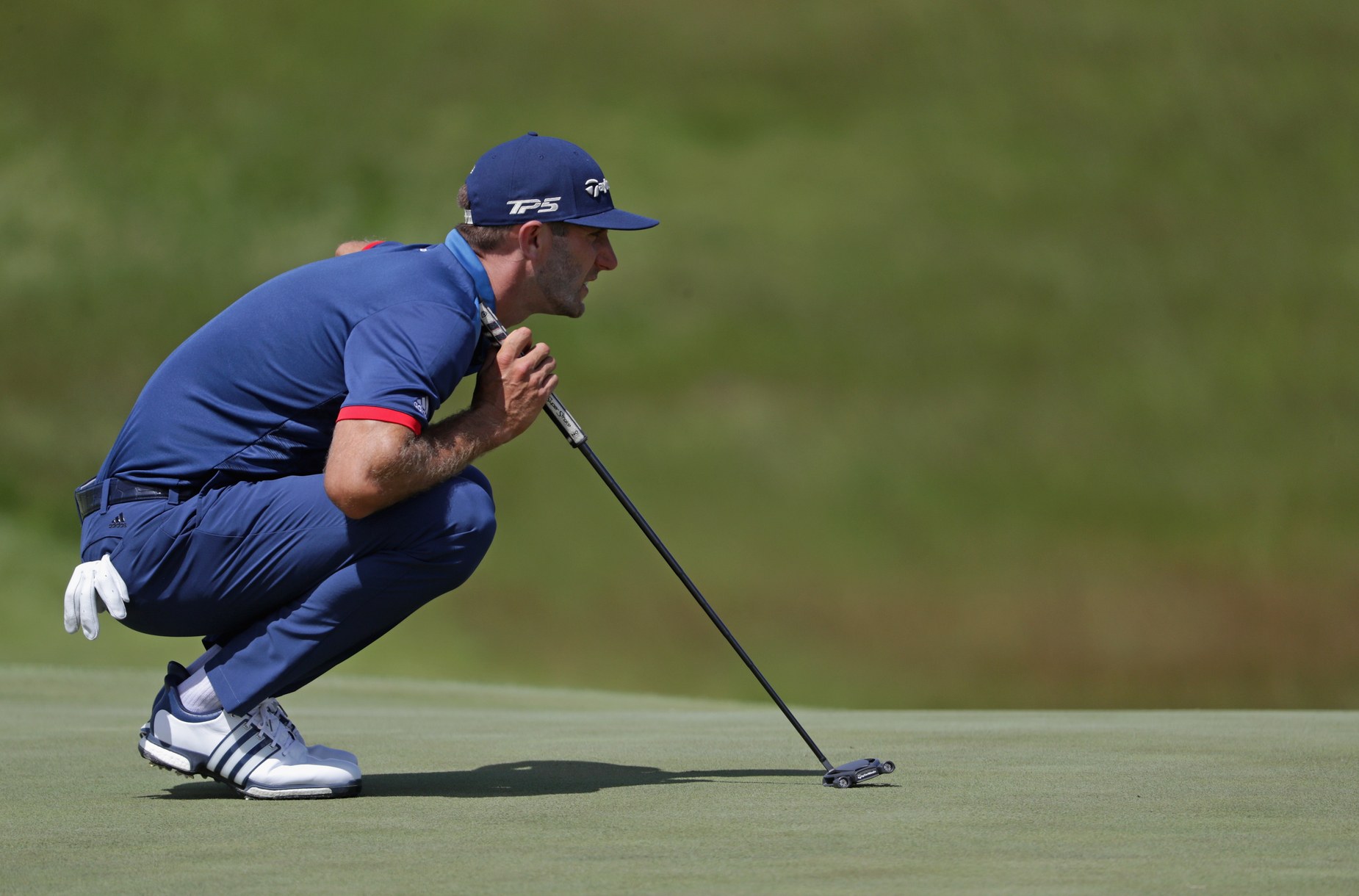 Dustin Johnson is No. 1 in the world, has three wins this year, is the defending U.S. Open champion and is the longest hitter in the game playing on the longest golf course in tournament history.

If only golf were that easy.

Thursday at Erin Hills, Johnson made two bogeys, a double and just one birdie en route to a three-over 75 in the opening round.

He played the four par 5s in two over (and made no birdies), with that double bogey coming on the 14th after finding fescue so thick with his second shot that he failed to reach the green with a wedge. Once he did, it took three putts to find the bottom of the hole.

“I’m a little frustrated that I shot three over,” Johnson said. “I didn’t play that bad. I just didn’t putt very good.

“I didn’t hit it great, but I hit it good enough to shoot a good score.”

While Rickie Fowler was busy torching Wisconsin farmland with seven birdies and no bogeys on his way to a personal major-best 65, and a sea of red swept over the leaderboard, Johnson proved that you still need to hit it where the trouble is not to score in a U.S. Open — even when that U.S. Open boasts the widest fairways in tournament history and has soft, receptive greens.

Statistically, Johnson hit nine of 14 fairways and 11 of 18 greens. But it was where those misses landed off the tee — in the hay — that cost him the most.

And even when he did find the putting surface the ball didn’t cooperate with Johnson averaging a woeful 1.83 putts.

Jordan Spieth and Martin Kaymer, the previous two U.S. Open winners playing alongside Johnson, didn’t fare much better, finishing at one over and even par, respectively.

“Neither one of us could make a putt,” Spieth said of he and Johnson. “D.J. and I will be on the practice green. We might have a pillow fight putting contest, just to see if we can spark anything.

“I’ve played a lot of golf with him and have seen him at his best. And everybody has off days one way or another.”

Though Johnson missed the cut in his last start before the U.S. Open, at the Memorial Tournament, little has gone wrong for him lately.

He won three straight starts between mid February and the end of March, ascending to No. 1 in the world with the first of those victories at Riviera.

Then came the Masters, where on the eve of the tournament he slipped down a few steps in the house he was renting for the week, injuring his back. He withdrew the following day and was out for three weeks. In his first start back, though, he tied for second at Quail Hollow.

Johnson also finished in the top 15 at the Players and AT&T Byron Nelson before rounds of 78-74 kept him out of the weekend at the Memorial. The two extra days off allowed him to practice at Erin Hills, a course he liked at first sight.

He didn’t return to the course until late Tuesday afternoon of this week, a day after his fiancée Paulina Gretzky gave birth to the couple’s second son, River Jones, on Monday night. Johnson played 18 holes of practice and was back about 12 hours later when the shots counted for real.

Once they did, it wasn’t long before he found trouble. Teeing off on the back nine, Johnson drove into the fescue on the par-4 12th but was able to save par. Two holes later he wasn’t as fortunate after an iron off the tee and lay up with an iron that found the tall grass again, this time the lie much worse.

“Where it went wrong is where I laid it up in the hay, that’s where it went wrong,” he said sarcastically. “And then I got on the green and three-putted for a double. It was a great hole I played there.”

Johnson followed with another bogey on 15 after his birdie putt from the back of the green ran 10 feet past the hole and he missed the one coming back.

He bounced back with a terrific tee shot on the par-3 16th that landed a few feet left of the flag for an easy birdie but gave it right back on the next hole after again hitting into the fescue off the tee.

Johnson closed with 10 straight pars but failed to capitalize on the remaining three par 5s.

“I just didn’t putt very well,” Johnson reiterated. “My speed was a little off. I felt like I was hitting good putts, they just didn’t go on the hole.”

It happens. Even to the best player in the world.