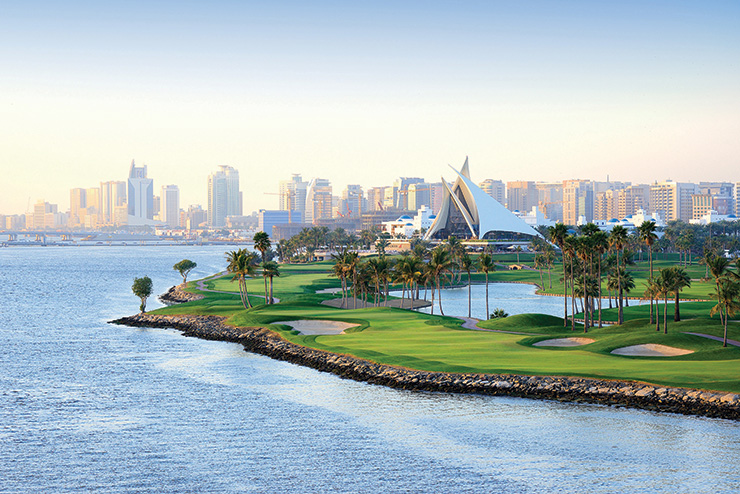 By Kent Gray
The glory paved road to Augusta National and St Andrews for Asia-Pacific’s best amateurs has taken a dramatic detour via Dubai.

In a huge coup for the UAE, the Emirates Golf Federation has won hosting rights to the delayed 12th edition of the Asia-Pacific Amateur Championship (AAC). Dubai Creek Golf & Yacht Club will host the prestigious championship from November 3-6 with the champion of the 72-hole strokeplay event to earn starts at the 2022 Masters and the 150th Open Championship at the Home of Golf next July.

The Asia-Pacific Golf Confederation (APGC), the Masters Tournament and The R&A made the joint announcement on Wednesday in a decision that is set to make Dubai Golf the temporary epicentre of the amateur game for the next two years.

Another of Dubai Golf’s properties, Jumeirah Golf Estates, will host the World Amateur Teams Championships in 2023 with the 32nd Eisenhower Trophy (men) and 31st Espirito Santo Trophy (women) to be played on JGE’s Fire course.

Wednesday’s announcement comes after the 12th Asia-Pacific Amateur, originally planned for Royal Melbourne in Australia last October and then rescheduled for Sentosa Golf Club in Singapore this October, were aborted due to the COVID-19 pandemic.

Created in 2009, the AAC was established to further develop amateur golf in the Asia-Pacific region and boasts freshly-minted Masters champion Hideki Matsuyama as a two-time champion. The 2021 championship will mark the first edition held in the UAE, one of the APGC’s 42 member countries.

Taimur Hassan Amin, Chairman of the APGC, Fred Ridley, Chairman of the Masters Tournament, and Martin Slumbers, Chief Executive of The R&A, said in a joint statement: “This year’s historic win at the Masters Tournament by Hideki Matsuyama, a two-time Asia-Pacific Amateur champion, underscored the importance of this event as a platform for the game’s development and rising talent in the region.

“We are grateful for the support of the Emirates Golf Federation and Dubai Creek Golf & Yacht Club, and we are committed to working closely with all involved to stage this year’s championship with responsible protocols in place so we can provide this life-changing opportunity safely to these deserving players. Dubai Creek’s Championship Course will enhance the tradition of world-class venues that have hosted this championship, and we look forward to showcasing the Asia-Pacific’s top-ranked amateurs this fall.”

Opened in 1993, Dubai Creek’s Championship Course features an 18-hole, par-71 layout originally designed by Karl Litten before its redesign in 2004, led by Thomas Bjorn. The course has previously hosted the 1999 and 2000 Dubai Desert Classic and the Mena Tour’s Dubai Creek Open, where 2018 AAC runner-up Rayhan Thomas shot a course-record 61 in 2017.

“After being part of the AAC for many years as a member of the APGC, we are excited to welcome this prestigious championship to the UAE for the first time,” said His Excellency Shaikh Fahim Bin Sultan Al Qasimi, Chairman of the Emirates Golf Federation.

“This opportunity means a great deal to the Asia-Pacific’s many talented amateurs. We are honoured to support the APGC, the Masters Tournament and The R&A in their efforts to conduct a safe event and advance our shared mission of spurring golf’s growth and development.”

“The AAC annually brings together the leading amateurs from across the region, and the world, and we are proud to be selected by the Founding Partners as the host of this year’s event,” said

Dubai Golf CEO Chris May said the Creek was proud to be entrusted with such an important event.

“Our Championship Course will present both a challenging and inspiring test for the players, and we look forward to highlighting their talent and contributing to the AAC’s impact on the game,” May said.

China’s Lin Yuxin, who won the 2017 (Royal Wellington) and 2019 (Sheshan International Golf Club) ACCs and went on to cash-in by making the cut at last month’s 149th Open at Royal St George’s, will aim to become the first three-time winner at The Creek.

“It’s a wonderful tournament that has given me the opportunity to play in both the Masters and The Open, for which I’m very grateful,” said the left-hander, 16th in the World Amateur Golf Ranking (WAGR).