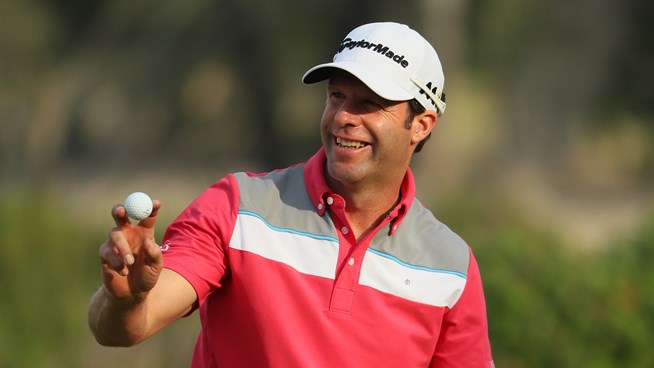 Bradley Dredge will be out with the dew sweepers for the second round of the Commercial Bank Qatar Masters Friday but will have slept very comfortably on a one shot lead in the second Desert Swing event.

Dredge is in the second group off the 10th tee at 6.40am Friday and knows with the breathless conditions expected to last until at least lunchtime that he has a grand opportunity to extend his lead going into the weekend.

“I’m delighted with the score today,” he said. “A bit surprised, I thought I was going to hit the ball a bit better off the tee than I did but I hit a few more fairways. I putted really well.”

Even though Dredge is expected to avoid the worst of any wind in the second round, he won’t mind if the Peter Harradine design bears its teeth over the weekend.

“I prefer it a little bit more windy. I’m a bit more used to playing the wind, I suppose. I quite like it and I get used to it around here as well. It’s quite a good challenge. The greens are always firm, so it’s always tough to get the ball close to the hole,’ said Dredge who has to go way back to the 2006 Omega European Masters for the last of his two European Tour titles.

“I understood that today, scoring was going to be good. It was the opportunity to go at more flags and get the ball a bit closer to the hole.

“Without the wind, it sort of makes it a lot easier to get the score going and get the putts in and get in with some sort of number.”

Aphibarnrat, Kimsey and McDowell had set the pace in the morning with rounds of 66 and with the wind expected to get up, it was thought they would share the first-round lead.

The winds never came, however, allowing first Korhonen and then Dredge to surge past them, The European Tour reports.

Korhonen made birdies on the 10th, 12th, 13th, 16th, 18th and first and when he added another on the fourth, he was in the lead. He then finished his round with five pars – including an excellent save on the 7th – to allow Dredge to take control.

The two-time European Tour winner turned in 33 with birdies on the 1st, 5th and 8th  and a burst of three in four holes after the turn had him right in contention. An approach to 10 feet on the 15th put him in a share and he then drove the par four 16th for another birdie and a one-shot lead.

McDowell birdied his first three holes and then added further gains on the 14th, 16th and 18th to turn in 30 before coming back in level par.

Kimsey had birdies on the 10th and 14th but came alive on the 16th tee, reeling off four in a row and then putting an approach to three feet on the 7th but he gave the shot back on the next.

Aphibarnrat had gains on the 16th, 18th and first but dropped a shot on the third before finishing with four birdies in six holes, including two to finish his round.