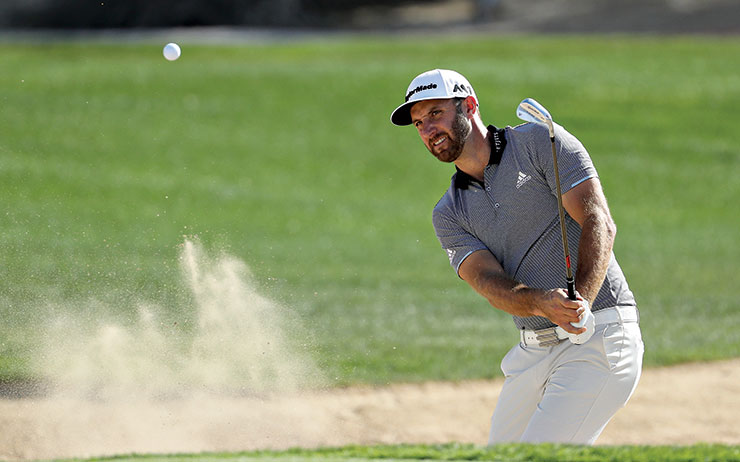 Dustin Johnson needed just nine practice holes Tuesday to measure up The National. Long (as in drives) story short, DJ likes what DJ saw and didn’t mind admitting so on the eve of his Abu Dhabi HSBC Championship bow.

“I feel like it’s pretty straight forward,” the big-bombing American said after playing the outward nine of the 7583 yard, par 72 Peter Harradine design.

“You’ve got to drive it straight. That’s one of the keys obviously is hitting it straight and I feel like I’m driving it pretty well right now, so hopefully we’ll have a good week.”

With fellow long-baller Rory McIlroy a late scratching from the Desert Swing opener, Johnson’s famed driving is sure to draw Thursday’s biggest galleries, never mind that he is paired with Masters champion Danny Willett and Open winner Henrik Stenson in an all-major marquee group. The 32-year-old ranked second in driving distance on the PGA Tour last season with a 313.6 yard average (a whisker under of a yard shy of JB Holmes) and with a repeat of those numbers it will be entertaining to see if he can over power The National.

Yesterday’s Pro-Am gave the reigning U.S. Open champion a back nine reference and likely more confidence to take into the opening round.

“I feel like it’s set up well for me. We’ll just have to see. But I feel like the game is in pretty good shape right now, so I’m looking forward to playing here,” he said.

With his TaylorMade driver co-operating as ever, Johnson continues to focus on his wedge work as he eyes more majors. The Ryder Cupper was not too tardy last year, finishing seventh in the PGA Tour’s proximity to the hole stat category at 33 feet (Adam Scott was No.1 with a 32.4ft average) but still sees room for improvement.

“I’m not really going to change much from what I did last year. You know, continue to really work on the wedge game. I feel like I’ve still got a lot of room that I can improve there. And you know, kind of the 150 to 200 range; my proximity to the hole is a little bit down from the years past, so work on that a little bit, too,” he said.

For all his unstated confidence and notwithstanding McIlroy’s absence, Johnson knows he will have to play well to kick-on from his T6 finish at the SBS Tournament of Champions in Hawaii where he was 15 under, seven shots shy of champion Justin Thomas.

“It’s got a great field here, a lot of great players. Obviously Rory is a great player and no one wanted to see him pull out, including myself. But things happen and you know, he had to pull out for this week just so he could get healthy and come back and play in a few events from now.. Yeah, I still think it’s going to be a great tournament. It’s going to be very tough to win.”