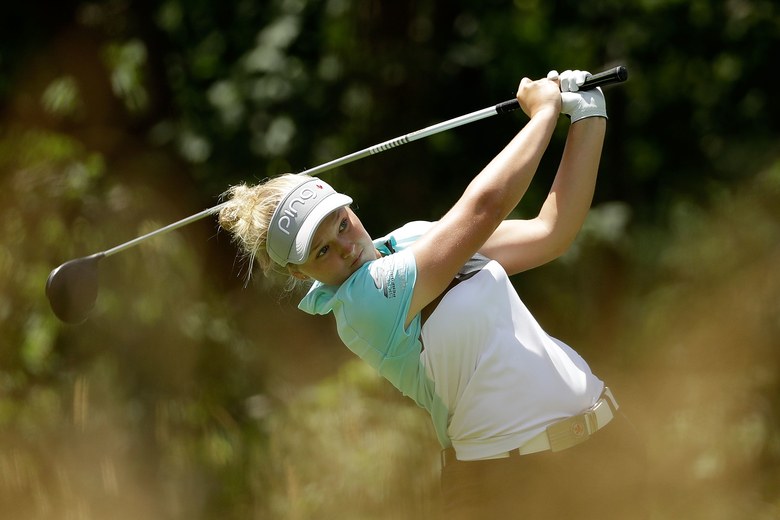 OLYMPIA FIELDS, IL – JULY 01: Brooke Henderson of Canada hits her tee shot on the fifth hole during the third round of the 2017 KPMG PGA Championship on July 1, 2017 in Olympia Fields, Illinois. (Photo by Stacy Revere/Getty Images)

It’s been three years since Jiyai Shin competed in an LPGA major—but her third-round 64 at the KPMG Women’s PGA Championship wouldn’t make you think so. Shin is eight under for the tournament and is alone in third place, two behind co-leaders Danielle Kang and Chella Choi. Though she’s been away from the LPGA for a few years to play the Japan LPGA, Shin knows how to succeed on this tour. She was the first South Korean to become No. 1 in the world and has won on the LPGA 11 times.

Shin enters the final round with winning experience and fond memories of past major victories. The forecast for Sunday is said to include some wind at Olympia Fields Country Club outside of Chicago, and that’s something Shin is looking forward to. Back in 2008 and 2012 she won the British Open and said that when thinking about those major victories she thinks about the wind and remembers it “like a friend.”

Another player with some good vibes about this event is Brooke Henderson, who won the KPMG last year. She’s three back at seven under.

“It’s Saturday, third day of a major championship,” said Henderson, ”and any time you can see your name that close to the top is a really good feeling, especially when you know you have one day left.”

Until mid-June, Henderson hadn’t been having a very strong season. She’d only had one top-10 finish in a stroke-play event. But she won the Meijer LPGA Classic earlier this month, and it’s given her the mid-season boost she feels like she needs.

“Any time you can win out here on the LPGA Tour against the best in the world, it gives you a lot of confidence,” Henderson said. “And especially me, I didn’t have the season, the results, that I was really looking for, but I knew my game was in a great place. To be able to hoist a trophy and get that win so close to coming here was really important for me.”

Henderson isn’t the only winner this season who’s looking forward to Sunday. World No. 1 So Yeon Ryu is five back, as is Lexi Thompson. Like pretty much every event so far this season on the LPGA, it’s anyone’s tournament.