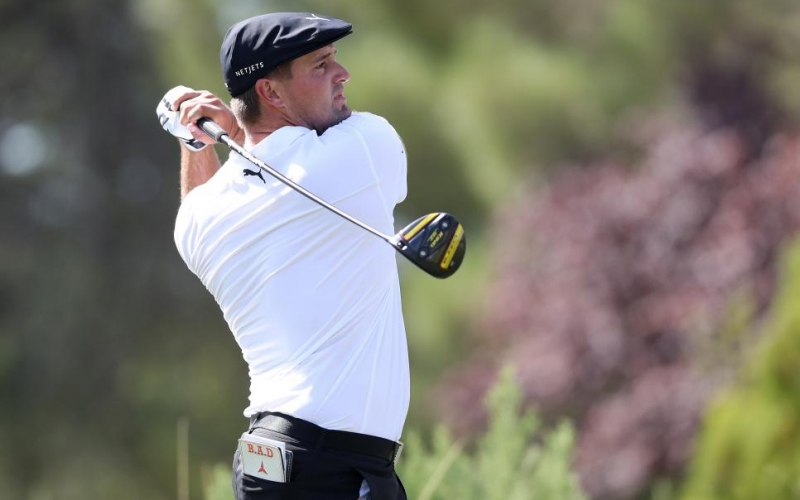 By Daniel Rapaport
On Friday, after nabbing a share of the halfway lead at the BMW PGA Championship on the European Tour, Matthew Fitzpatrick made headlines with his comments on Bryson DeChambeau and the recent distance explosion in professional golf.

“I’m biased because I’m not quite the longest,” said the 26-year-old Fitzpatrick, currently ranked No. 20 in the world. “But in the U.S. Open at Winged Foot, fair play to Bryson, he won and shot six under. But the fairways were tight as hell. I drove it brilliantly and actually played pretty well [despite missing the cut by one stroke], but I was miles behind. He’s in the rough and miles up and he’s hitting wedges from everywhere. It just makes a bit of a mockery of the game.”

After DeChambeau finished his second round of the Shriners Hospitals for Children Open—he followed up an opening 62 with a four-under 67, and sits one back heading into the weekend—he was asked about Fitzpatrick’s assertion that “it’s not a skill to hit the ball a long way.”

“I appreciate that comment,” DeChambeau said. “It’s a compliment to me honestly. A year ago I wasn’t hitting in anywhere near as far as I am today. It took a lot of work, a lot of hours to work through the night to figure out a lot of this stuff.

“I would say it actually takes more skill to do what I’m doing, and albeit I may have—my fairway percentages are a little bit down, I still believe I’m hitting it straighter than what I was last year with the distances that I was hitting back then. So I actually appreciate those comments. I think he’s looking out for certain set of players, and I appreciate that.”

DeChambeau’s 40-pound beef-up, which included late night workouts and countless protein shakes, has already yielded tremendous results. In addition to the six-shot victory at Winged Foot, DeChambeau also won the Rocket Mortgage Classic in July and finished T-4 at the PGA Championship. He has indicated that he will put a 48-inch driver into play at the Masters—the longest a driver can be under the rules—in an effort to add even more speed and open up angles at Augusta National.

Other players have surely taken note of DeChambeau’s gains and his subsequent success—Rory McIlroy posted a video showing a 193 mph ball speed reading to Instagram, and Dustin Johnson’s coach Claude Harmon III posted a video of his student on a similar pursuit.

DeChambeau’s prodigious power has been on full display thorugh two rounds at TPC Summerlin in Las Vegas. He had five two-putt birdies on Thursday and became the first player in the ShotLink era to drive the 380-yard par-4 seventh. He then did it again on Friday and made eagle.

“For me out there today, I was still able to hit a lot of fairways at 360 yards,” DeChambeau said. “That’s tough to do with drivers. If anything, it’s more difficult to hit more fairways the way I’m doing it with the rules the way it is today. It’s more built for players like Matthew Fitzpatrick and his distances and players like that.

“You know, I actually appreciate it, because I would love to have a conversation with him about it and say, ‘Hey, man, I would love to help out. Why couldn’t you do it, too?’ You see Rory and DJ doing the same thing, too. They’re seeing that distinct advantage, and I feel like it’s great for the game of golf. I don’t think it takes less skill.”