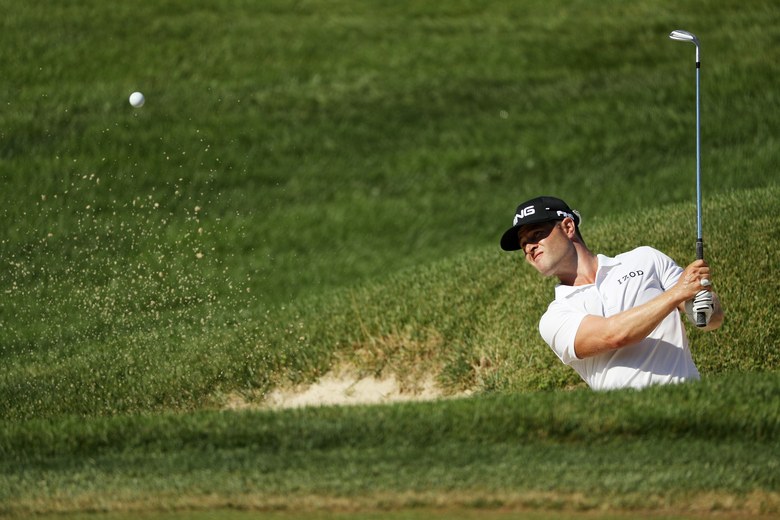 POTOMAC, MD – JULY 01: David Lingmerth of Sweden plays a shot from a bunker on the eighth hole during the third round of the Quicken Loans National on July 1, 2017 TPC Potomac in Potomac, Maryland. (Photo by Patrick Smith/Getty Images)

David Lingmerth was on cruise control the first 36 holes at the Quicken Loans National, shooting a pair of 65s that had him at 10-under for the tournament. He stumbled out of the gate on Saturday at TPC Potomac, going two-over on his first four holes and making a double-bogey on the par-4 fourth. After a 90-minute rain delay, Lingmerth, and the golf course, fought back. Despite shooting a three-over 73, the Swede still leads at seven-under 203.

Closing out the tournament on Sunday would make Lingmerth a wire-to-wire winner, and would give him his second win of his career.

Daniel Summerhays brought new meaning to the phrase “par is a good score” on Saturday, making 16 of them, plus one birdie and one bogey, to post an even par 70. He has just one top-10 finish this season, coming at the Memorial Tournament, where he took the lead into the final round but shot a final round 78. He’s one off the lead at six-under 204.

Just two shots back at five-under 205 is Spencer Levin thanks to the low round of the day (and of his season), a five-under 65 that featured just one bogey. Levin, 33, has struggled in 2017, making just 10 cuts in 24 events and registering only one top-25 finish. His performance Saturday was a timely one, giving him a chance to earn a spot in the Open Championship, an event he’s played in only twice in his career. The California native is looking for his first victory on the PGA Tour, and any finish higher than T23 would be his best of the season.

Reigning U.S. Amateur champion Curtis Luck is three back at four-under 206. The young Australian, who carded a three-under 67, is playing in his sixth event as a professional. His best finish (T34) came at the Dean & DeLuca Invitational.

Geoff Ogilvy and Sung Kang didn’t play as well, but they’re tied for fourth with Luck at four-under.