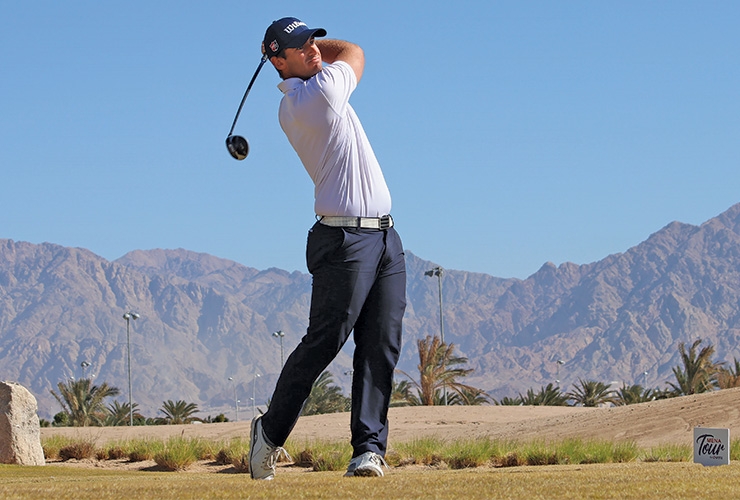 The MENA Tour has been great. I was encouraged by my coach Rob Watts to play. It was a bit of a risk for me because I only had enough money to play the first event and then after that I would’ve been playing on my credit overdraft. Luckily I won that first event.

It has been a difficult couple of years. My father has struggled with an alcohol addiction for many years which has progressively got worse and eventually deteriorated his health dramatically in 2019 [Langley’s father passed away late last year]. We’ve always been on a tight budget because of this and my mum has been amazing in helping support me where she can. Even though we’ve had some difficulties at home she has never once stopped me from chasing my dream and I have had the freedoms and support to travel the world and gain some great experiences.

I turned pro last September after a two-year walker cup run that I fell just short of achieving. I played two EuroPro tournaments on invite and made it to second stage of European Tour Q school. This is my first “tour” of what I consider to be my rookie season.

With everything going on right now I’m very grateful for the opportunity to compete and win the Journey to Jordan #1 Championship. Not many people this year are going to get that opportunity so I’m glad I was able to take that opportunity.

Winning has been a massive boost to my confidence and self-belief. Also, my other experiences during the first half of the tour were invaluable. I’ve learnt from my win and comparing that to some of the other mental states, what really works for me and I’ve been able to use that. I think my 29 on the back nine in Oman was proof of those things… I have learnt after that bad start to the final round I was able to drag myself into the right frame of mind to pose a challenge to the win [Langley eventually finished runner-up to countryman Bailey Gill at the Ghala Open].

I have put myself in a great position to win the overall Journey to Jordan title. Obviously we don’t know the schedule yet so we will just have to wait to know what will happen but I would love to get the chance to play those events. So far it seems that Middle Eastern golf suits my game. I hit it relatively high and spin my wedges a lot so the firm desert conditions have been good for me.

I think from a logistical standpoint, the idea of the six-week, five tournament encampment at Ayla Golf Club to finish the season makes sense. From a player point of view, it’s a little bit frustrating to have to play the same course [potentially up to eight times, not including Q-School] in tournaments but we are in unprecedented times, so I think we have to be grateful that we even have that opportunity to potentially finish our season.

You know, we’ll adapt at whatever gets thrown at us. If we play the last six weeks at Jordan, I’m okay with that. Obviously, for me I’ve got a win there so it’s definitely a course I feel comfortable on.

The COVID-19 lockdown has been difficult emotionally, I’m not going to lie. Obviously I play golf fulltime so to all of the sudden have nothing is very strange, you sort of feel like your sense of purpose has gone a little bit. I’ve been extremely bored really.

I think my DIY skills have improved a lot, doing bits and bobs and jobs around the house. I’ve been reading more books so I’ve learnt some stuff from that but other than that, I can’t say I’ve really learned any new skills. Not a whole lot really.

I have an indoor hitting bay that I’ve created in my garage because of this. I’m able to hit iron and wedges but I can’t get swings on the woods in here just because of the space available. I’ve just got a launch monitor and simulator in here so I will be able to practice with a bit more purpose. I have been hitting balls and doing drills and sending videos to my coach but there’s definitely a limited amount of productivity in here.

To be honest, I haven’t read up on it really deeply but I’ve heard the European Tour might struggle after this, I’m not too sure. I just don’t think we know so we’ve just to take everything as it comes. Hopefully, the mini-tours find the financial backing to continue because I think they’re really important pathway for us.

I’m really looking forward to the opportunity to play in the Trophée Hassan II [Langley earned the invite as the halfway leader in the Journey to Jordan OOM]. My game has proven itself across the globe and I have had great experiences from my time at Old Dominion University in USA which has set my game up to be very adaptable to many grass types and conditions. I’m hoping it gets rescheduled and my invite is valid but I’ve not heard anything yet.

I’m glad I’ve had a little time to work on my physique and get flexible again because the travelling had taken its toll a bit. But it’s not really been the rest I had already planned in terms of seeing friends and family. I’ve been at home with my Mum so that’s been good to spend more time with her but my girlfriend is from America and she was meant to be coming over for a week or so. So stuff like that has been called off, so it hasn’t been that kind of reset.

I’m itching to get back playing in the sense that I just miss the game more than anything. To be honest, I wouldn’t particularly want to compete right now because I know I would be rusty. I think the competing side almost comes second to just wanting to get out there and improve and practice and improve and play and then we can hopefully compete after that. -—with Kent Gray