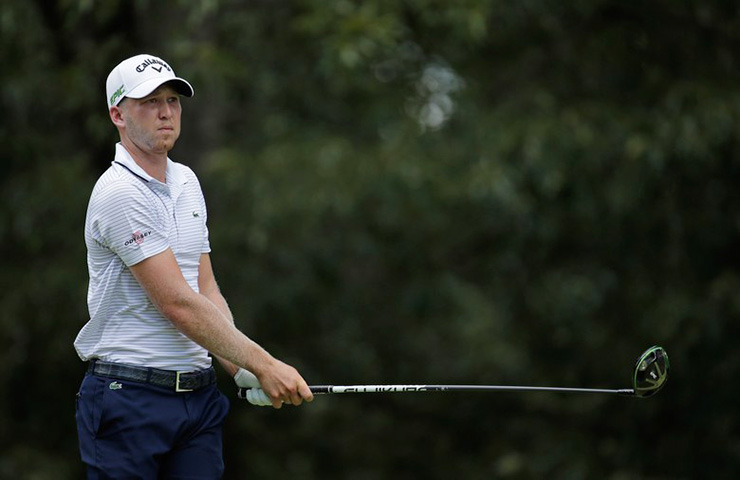 MEMPHIS, TN – JUNE 11: Daniel Berger plays his shot from the seventh tee during the final round of the FedEX St. Jude Classic at the TPC Southwind on June 11, 2017 in Memphis, Tennessee. (Photo by Andy Lyons/Getty Images)

Daniel Berger did not begin his round optimally Sunday at TPC Southwind. He missed the fairway on the 434-yard par-4, then his approach found high grass left of the green. He chunked a chip short of the putting surface, leaving him a nervy par chip from 25-feet away. Berger holed it and never looked back, shooting a bogey-free 66 to successfully defend his title at the FedEx St. Jude Classic.

Berger, 24, was not a factor through the first 36 holes, shooting rounds of 70 and 68, leaving him seven shots off the lead. But a pair of 66s over the weekend to get to 10-under overall proved to be enough, despite those chasing him with numerous chances to match or better his score.

The victory makes him the fourth back-to-back champion in the tournament’s history, joining Dave Hill, Lee Trevino and David Toms as the others to do so. He also joins those three, Nick Price, and Justin Leonard as a multiple-winner of the event. It solidifies what’s been an already strong season for Berger, with four top-10s, five top-25s, and now well over $2 million in earnings. Next week, he will tee it up in his third U.S. Open, where he’s finished in the top-40 both times.

After potentially shooting himself out of the tournament on Saturday with a four-over 74, Charl Schwartzel came back on Sunday, posting a four-under 66. It would ultimately leave him one shot short at nine-under, but the South African should be happy with where his game is at heading into Erin Hills.

Tying Schwartzel for second at nine-under was Whee Kim, who fired a three-under 67. It’s the best finish of the South Korean’s career, and comes after missing six of his last seven cuts.

Two of the best rounds of the day came from Billy Horschel and amateur Braden Thornberry. Horschel’s six-under 64 was the low of the field in the final round, and featured birdies on his final four holes. Thornberry, the 2017 Haskins Award winner and NCAA individual champion, carded a bogey-free five-under 65. They both finished at eight-under for the tournament, tying for fourth with Rafa Cabrera Bello, Kevin Chappell and Chez Reavie.

Amidst all the chatter surrounding his status in the U.S. Open, Phil Mickelson could have pulled off a victory on Sunday in Memphis. The five-time major champion had a share of the lead at nine-under on the 10th hole, but a triple-bogey seven on the par-4 12th effectively ended his bid. He finished in solo ninth at seven-under after shooting a two-under 68.