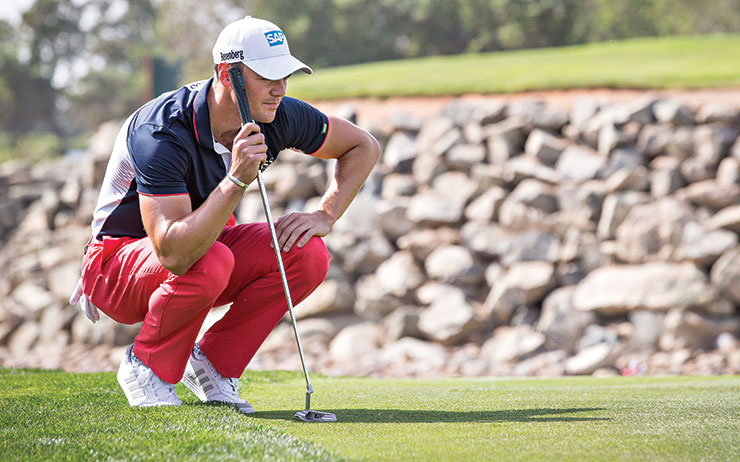 The German driving machine stalled on moving day but Martin Kaymer isn’t unhappy to be the hunter rather than the hare as he goes in search of a fourth Falcon trophy Sunday.

A topsy-turvy even par 72 kept the 36-hole leader on -12 through 54-holes of the 12th Abu Dhabi HSBC Championship but saw the 32-year-old drop a spot into a five-way share of second heading into the final round.

The world No.53 was regarded as one of the coolest closers in golf until he infamously let a 10-stroke lead slip with just 13 holes of the 2015 championship to play, handing the Falcon to Frenchman Gary Stal.

As such, the two-time major champion doesn’t mind starting Sunday a shot adrift of English pace-setter Tyrrell Hatton who carded a 68 Saturday to lead at -13.

“I’m not having a lot of pressure of winning the golf tournament. Always when you lead a golf tournament by three or four shots, you kind of expect yourself to win, and I don’t really have that pressure tomorrow. I know I’ve done very well here in the past, so I can play very free and very aggressive tomorrow.”

But surely The National owes you one after 2015?

“It doesn’t really owe me one. It was my own fault. I didn’t really get unlucky. It was just poor golf shots at the wrong time. It was in the past. Let’s keep it that way.”

Kaymer mixed three birdies with as many bogeys on Saturday as the wind whipped up.

“I missed a few fairways today and then it’s difficult to create birdie chances. And then I had a couple of poor shots on 10 and 11. Made a couple bogeys there,” he said.

“The wind was strong from the first tee to maybe 13 or 14, and then it was quite tricky to hit the fairways, because the holes, even when it was downwind, you have to cut so much off of the fairway. Almost the holes become doglegs. I found it very difficult today to hit fairways and therefore, didn’t shoot the best score.

“I fought back well with another birdie, and then the putts didn’t drop in the end. So overall, still a decent round. I think I’m in very good position for tomorrow.”