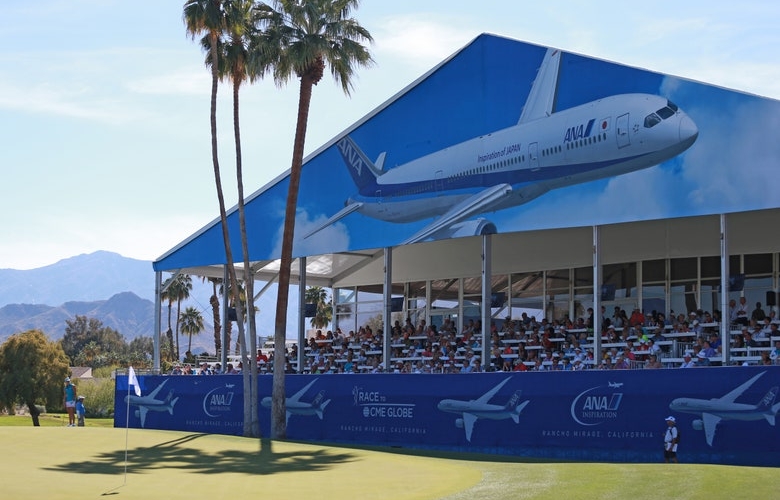 Matt Sullivan
The 18th hole green on the Dinah Shore Course at Mission Hills, where the ANA Inspiration is played.

By Keely Levins
Citing a need to protect the players and those who follow the tour during the COVID-19 outbreak, LPGA Tour Commissioner Mike Whan released a statement early Friday UAE time announcing the postponement of the next three events, including the year’s first major championship.

Beginning next week, the three events—Volvik Founders Cup, Kia Classic and ANA Inspiration—were set to be played in consecutive weeks in Phoenix, Carlsbad, Calif., and Rancho Mirage, Calif. Rather than cancel the tournaments, Whan said the plan is to reschedule all three for later in 2020.

“This is a difficult situation and as we navigate these uncertain times, we appreciate the support of all those involved with the LPGA,” Whan said in a statement. “I am fully committed to rescheduling these important events on our 2020 schedule, especially our first major, the ANA Inspiration. Our thoughts are with all of those around the world affected by this virus. And on a personal level, it pains me to see the impact of this health crisis on our athletes, our sponsors and our fans. That said, I know keeping our LPGA family safe, and all those who follow us safe, has to be my top priority.”

The announcement comes after the LPGA previously cancelled three events in Asia due to the spread of the coronavirus. The Women’s Australian Open was the last LPGA event contested. It ended on Feb. 16, meaning the tour will be dark for at least seven weeks running through the scheduled end of the ANA in the first week of April.

Additionally, the Symetra Tour’s two upcoming events in California also have been postponed.