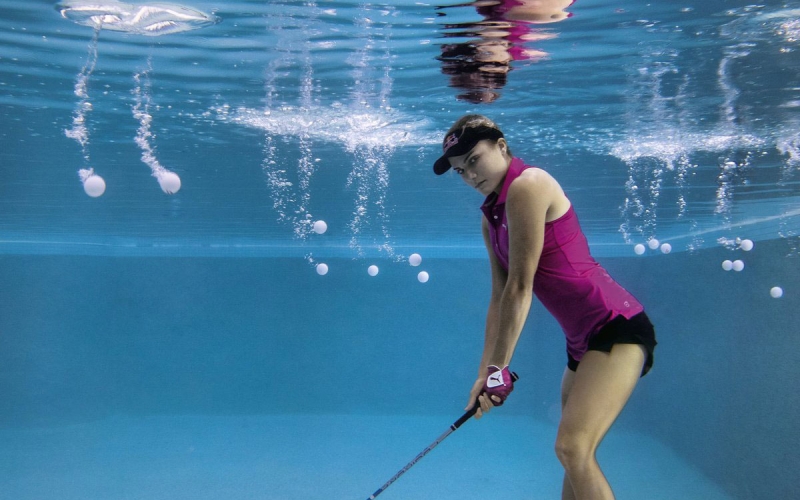 The last time Lexi Thompson caused a stir with a swimming pool photo shoot, it was for a series of photos that showcased the young golfer in a new light.

Some of my favorite pics from the @golfpunk_magazine shoot 🙂

Thompson’s latest aquatic endeavor was every bit as cool and far more ambitious. It featured the LPGA star not in a bikini, but in full golf garb, with a golf club. . . underwater.

Put my own "golf twist"⛳ on the iconic Muhammad Ali photo from Life Magazine! Thanks @redbull for making this happen! ?#RIPAli #TheGreatest pic.twitter.com/Qzr8rmeaMh

The full series of photos is pretty amazing, even more so when you consider what went into it. Photographer Al Bello, shooting for Red Bull, detailed some of the challenges of the shoot, from keeping the water still, to Thompson struggling to keep her eyes open, to cloudy water. In fact, the conditions were so bad at the first pool that the crew had to abruptly switch hotels to a new pool to get the right shot.

“I was laughing to myself because the pool we rolled up to had hotel guests lounging on the pool deck and swimming on vacation,” Bello wrote. “In true Miami laid back style the guests took it in stride with our Red Bull army invading their pool and sat back and enjoyed the show. We reset the lights and got to work in the clean pool.”

You can see the behind-the-scenes video of the pictures, which were inspired by a famed series of photos of Muhammad Ali training underwater, here:

#TBT to my day underwater! ?See, I told you it was real! ☺ Thanks @redbull @albello55 for making it happen! ?