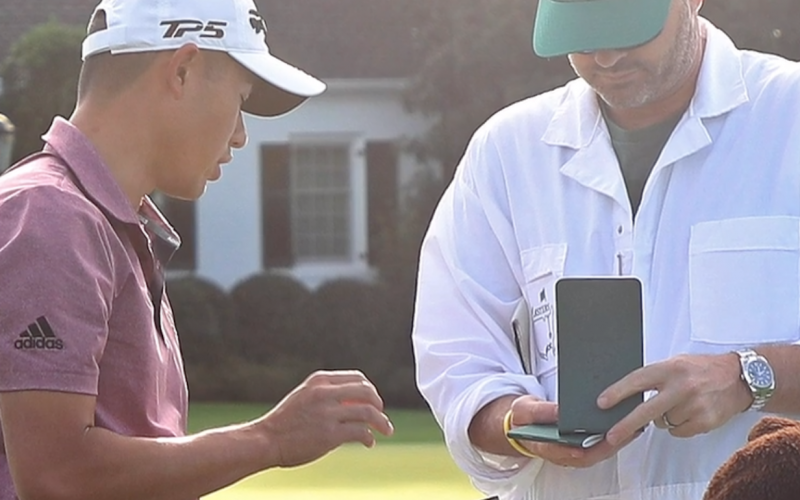 By Daniel Rapaport
Augusta National has been dissected front to back, fall and spring, inside and out. If you’re a Masters nut like we are, you know the intricacies of every hole. You know where they put the pins on Sunday. You may even know how the course has changed throughout the years.

The players know this stuff, too. But, as you might imagine, their x’s and o’s knowledge of golf’s most iconic venue runs much deeper.

Each participant in the Masters is given a yardage book when they register on tournament week. As you’ll see in a minute, these AGNC yardage books are significantly less detailed than the ones a PGA Tour player gets at “normal” events. Think of it as a canvas—it provides the bare bones information you need to play the course. After that, it’s up to the player and his caddie to add detail. 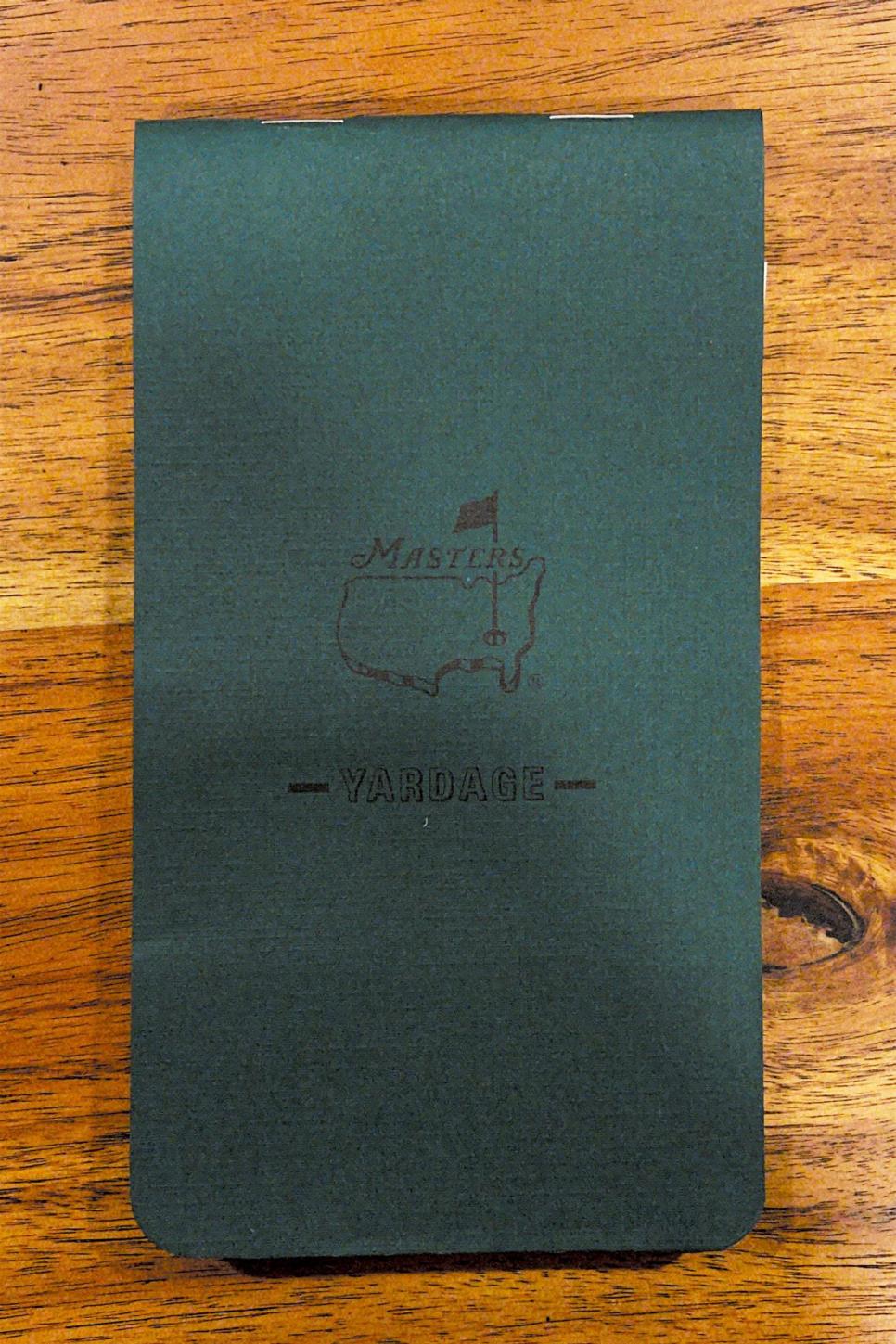 Learning the quirks of the golf course is an indelible part of the Masters mystique. Augusta is known as perhaps the ultimate “local knowledge” course; it’s so unique in design and specific in the questions it asks players. There’s a reason so many past champions hang around the leader board long after they’ve reached PGA Tour Champions eligibility, and why no one has won the Masters in their tournament debut since 1979.

Collin Morikawa learned this first-hand. The World No. 4 and Golf Digest playing editor took his first-Masters lumps when he finished T-44 last November, and he struggled with both his swing and getting comfortable on the grounds. Seeing as Monday of tournament week marked the first time he’d ever played Augusta National, his yardage book is not nearly as detailed as someone who’s played the event 20 times.

“Look how new this one looks!” jokes the 24-year-old. “I want this to look pretty beat up by the time I’m done.

But being the cerebral student of the game that he is, there’s already plenty in there to give you an insider’s look into how a tour pro prepares for the Masters.

The first thing that jumps out about an Augusta yardage book compared to a normal PGA Tour yardage book is the level of detail. Here’s a normal yardage book showing the first hole at Bay Hill. 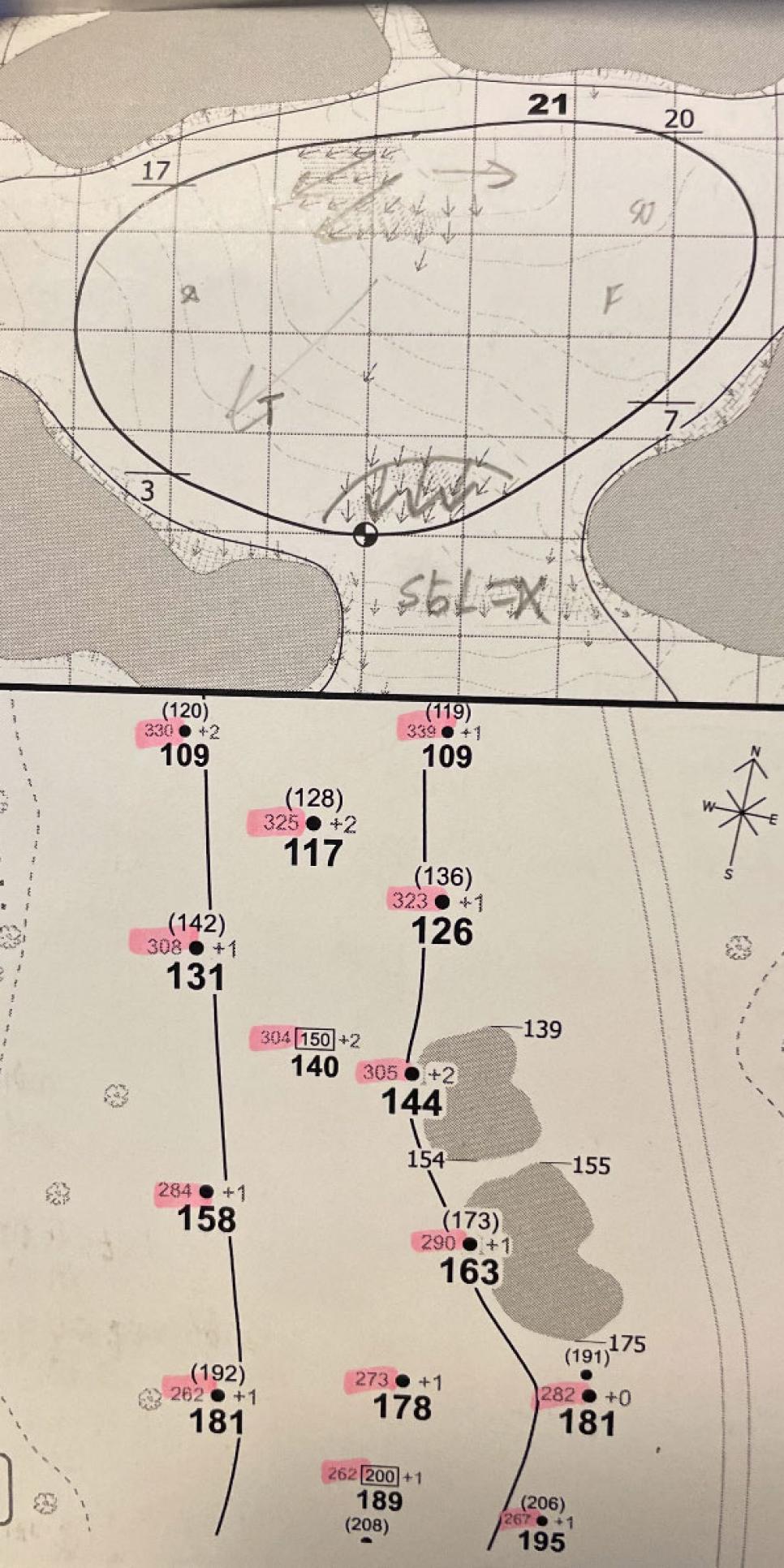 Take a look at the bottom section, which shows the fairway. Each dot corresponds to a sprinkler head on the ground. Traditionally, sprinkler heads show the distance from that spot to the middle of the green. But tour pros typically aren’t concerned with the middle yardage; they want to know how far it is to the front of the green. They take that number and then look at their pin sheet for the day, which tells them how many yards on the green a flag is.

So the big, bolded number under each dot is the number to the front of the green. The number in parentheses, above the dot, is what the sprinkler head actually says on it. But remember, this is the distance to the middle of the green, so it’s irrelevant in calculating distances.

If this is all getting a bit much, let’s run a quick example. Say the tee markers were 5 yards off the back of the tee box, and a player’s tee shot finishes right next to the dot with 117 under it. That means he hit his tee shot 320 yards off the tee (325 from the back of the box, minus five because the tee markers were closer). The sprinkler next to his ball will say 128, but the player and caddie will focus on the 117 number to the front edge. Then, the slope reading is +2, meaning it plays two yards uphill to the green. So, we’re at 119 to the front. He then looks at his pin sheet and sees the flag is 8 yards on the green. So, now we’re at 127. Now say he wants to land it three yards short of pin high. We’re at 124. It’s a little into the wind. Now we’re at 129. That is, more or less, how a PGA Tour player calculates a yardage.

Now have a look at the Augusta yardage book for the 11th hole. 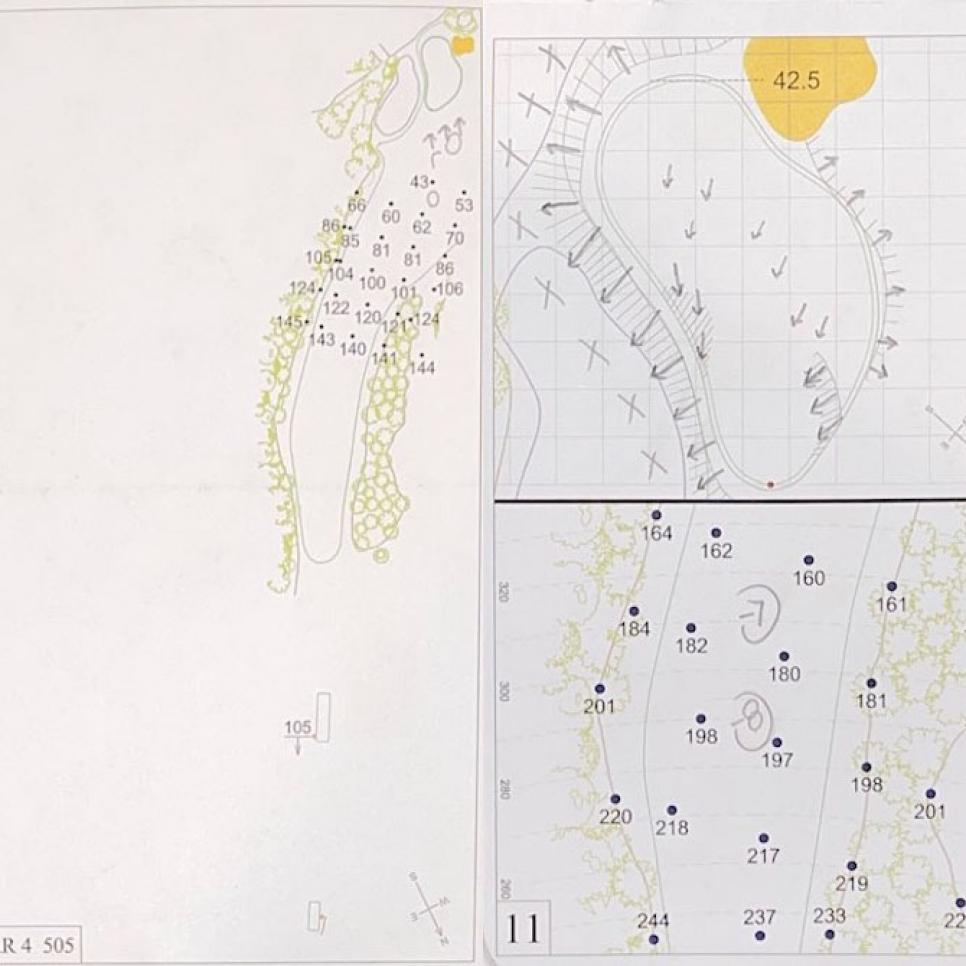 You’ll see that there is only one number next to each dot—the front of the green yardage. There’s no information as to how far it is to that spot from the tee, nor is there any slope information for the approach shot. This leaves a little more work for the player/caddie.

“Our caddies are so amazing,” Morikawa says, “and J.J. [Jakovac] is awesome—any number that I would need at any other event, he’s already calculated it.”

Morikawa has -7 and -8 in his book for different parts of the fairway, meaning he’s either playing seven or eight yards downhill, depending on where his ball ends up. Players are permitted to use distance-measuring devices with slope during practice rounds at the Masters, but Morikawa doesn’t follow them blindly.

“Normal yardage books have elevation, but what I’ve learned is that they’re not as accurate sometimes, and sometimes they’re a little more than what I like to play. Sometimes I like to play slightly less. And sometimes it’s all about feel. I don’t care if the laser tells me it’s down 10. I don’t feel that, I might want to play down seven.

For better or for worse, green-reading books have become a critical tool for PGA Tour pros. These are sold separately from the yardage books, and they include a laser rendering of every putting green—showing not just which way the green breaks, but what percentage each slope is. 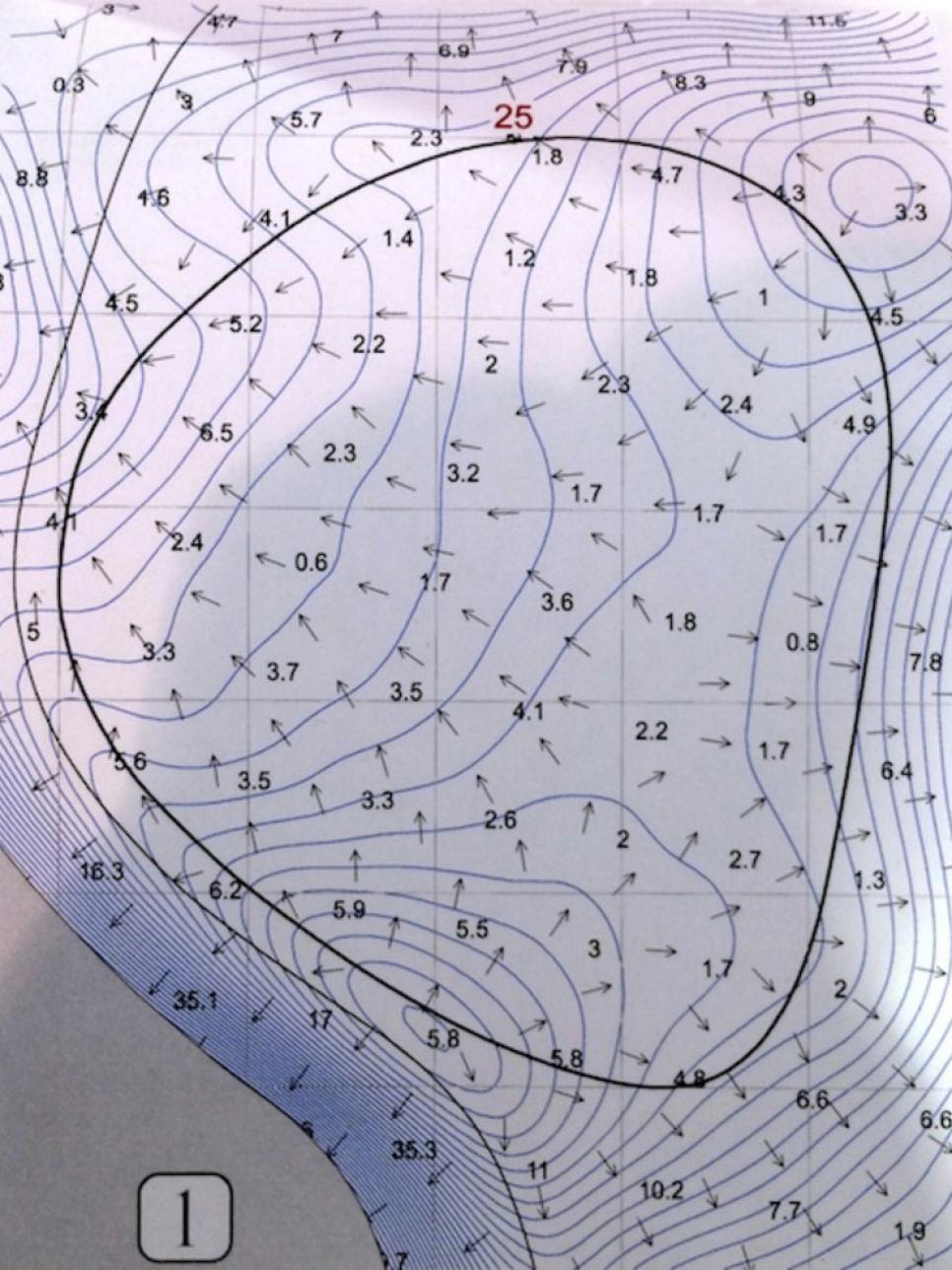 Augusta does not permit green-reading books, mainly because they’ve never permitted someone to bring the laser technology onto the property and document the greens.

The only rendering available of Augusta’s greens available to players is what’s in the yardage book, and it’s as bare-bones as it gets. Each square represents five yards, which helps give information on what you’ll need to carry a water hazard or a bunker. And there are a few straight lines to show slopes, but even those don’t provide much information.

“I’m always drawing arrows on the greens, just to make it more visually appealing and visually brighter in my head,” Morikawa says. “Knowing this is where a slope is … to the average golfer, those straight lines won’t mean anything.”

While his green drawings are pretty minimal, most players keep making notes each time they play the course. Here’s Ian Poulter’s yardage book for the fifth hole, posted on Instagram in 2019, with enough doodles and notes to make your head spin. 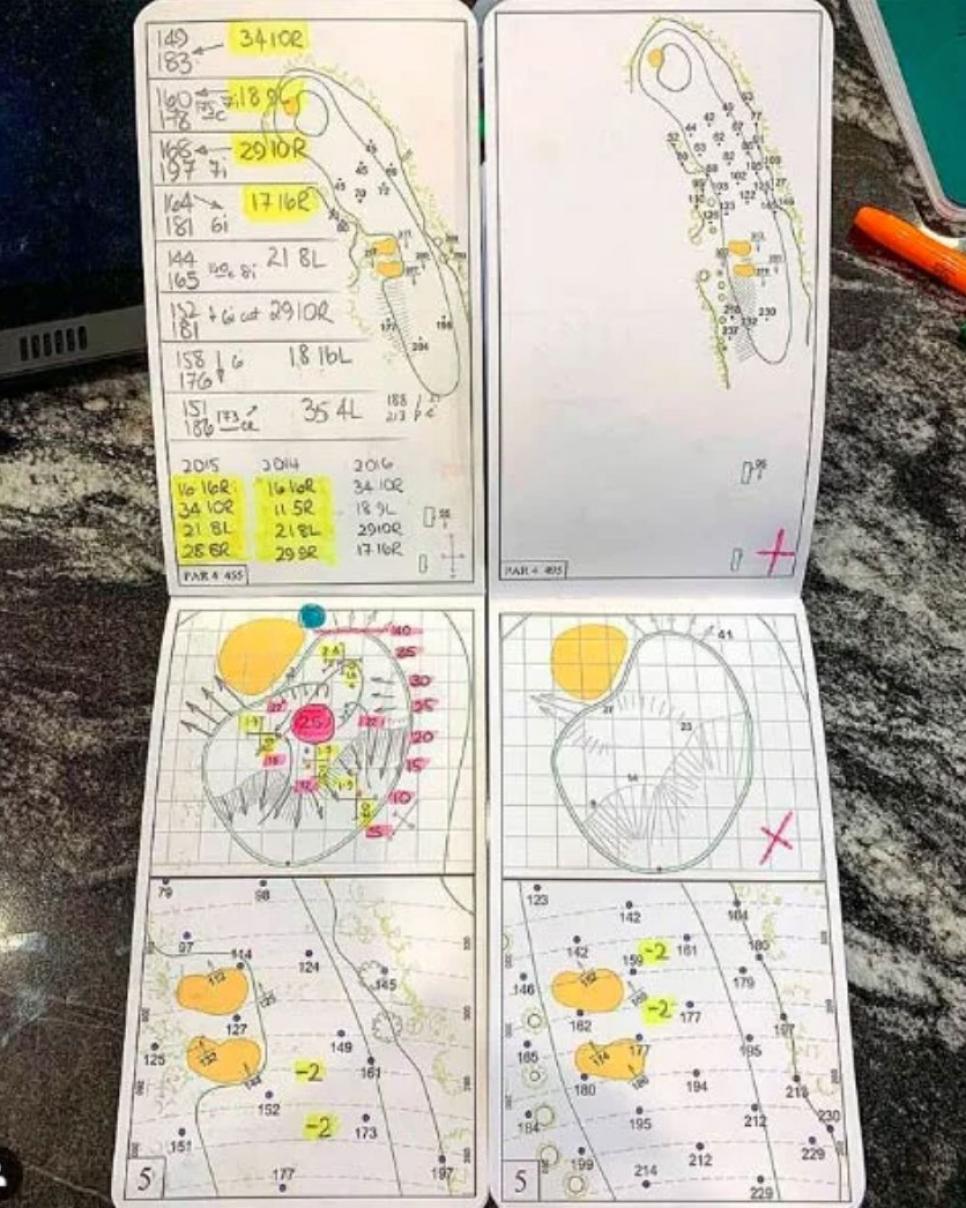 For many pros, the Masters is the one week a year they have to read putts without the aid of a green-reading book giving you additional information. And for the guys who use Aimpoint and other methods that rely heavily on knowing the exact percentage of a slope—they know a 2 percent slope putt from 10 feet breaks a certain amount, for example—this makes the already undulating greens that much more difficult to navigate.

The 12th hole in Morikawa’s book gives a good idea at how players approach perhaps the most famous par 3 in America. 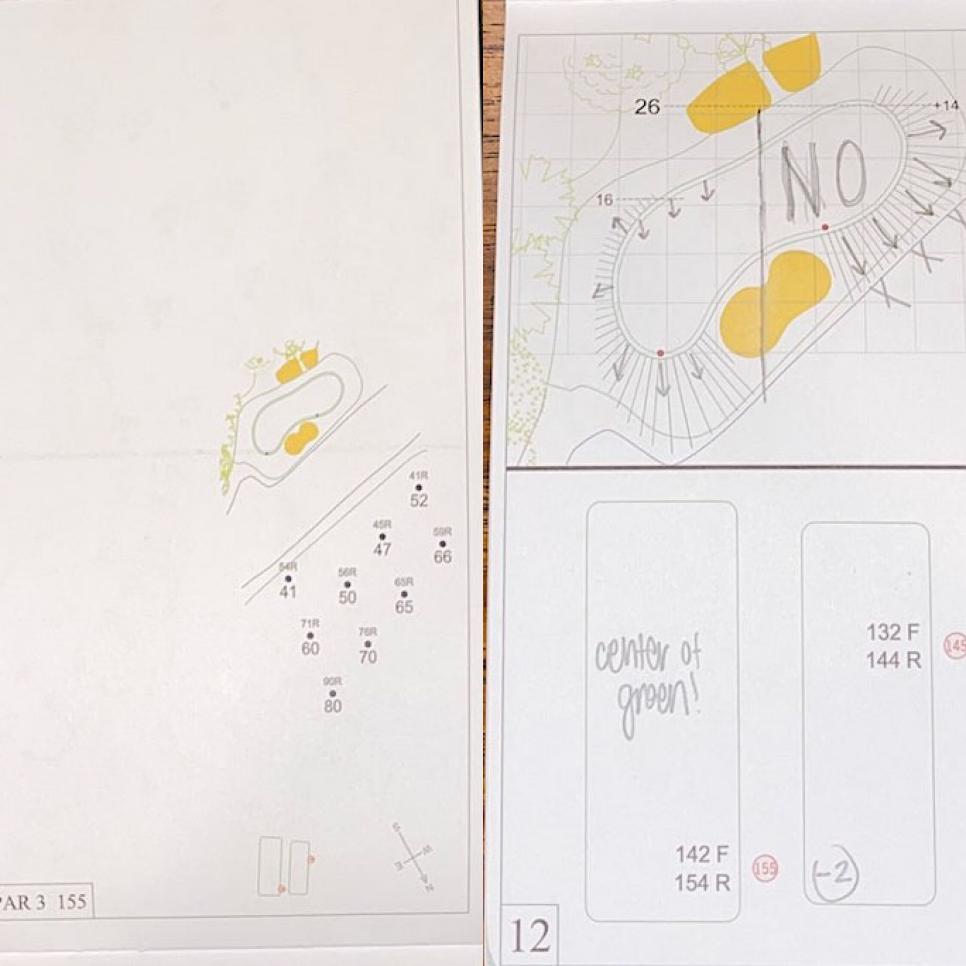 Going off the squares, you’ll see a player needs to carry the ball at least 10 yards further than the front number—which, as you can see on the bottom, is 154 yards from the back of the box and 142 from the front—to carry the bunker that guards the middle-right portion of the green.

Most notably, you’ll see “Center of green!” written near the tee box and a giant “NO!!” on the right portion of the green.

“For me, anywhere on that right side is just a no-go. Depending on what the wind is like, or if I have a really good number, I might try to squeeze it a little farther. But we’ve seen too many guys aim right, miss a little right, it falls in the water. There’s really no need. It’s such a small green, that if you just get your distance right you’re gonna have a good 20-footer at the pin.”

So if you watch Morikawa rinse a tee ball this weekend on 12—or if you see him stick one close to a back-right pin—you’ll know he did not follow his trusty yardage book’s directions.

Another Masters champ is absent this week but it has provoked little discussion and no sentimental tributes.