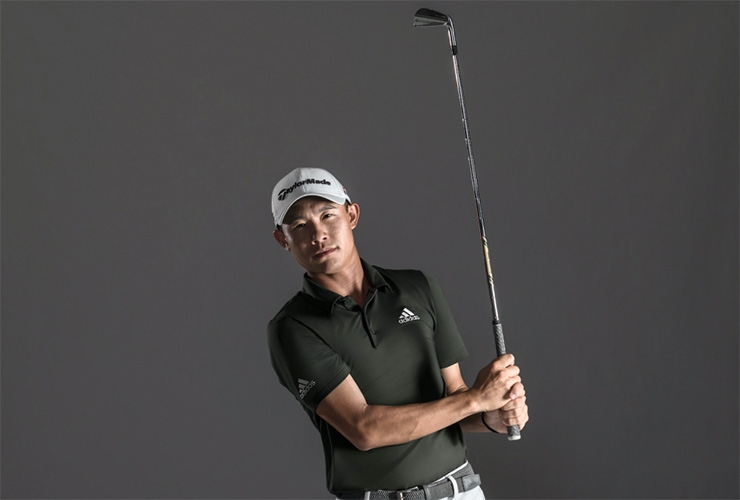 By Collin Morikawa
It’s easy to be seduced by distance, especially out here on tour. I see guys like Brooks Koepka and Jon Rahm fire balls for miles and think, Yeah, I’d like some of that. But one of the best pieces of advice I’ve received since turning pro came from Justin Thomas. He told me to know myself and stay true to that. I got to the PGA Tour by playing a certain way, and there’s no reason to make changes simply because the courses are longer and the competition is tougher.

I listened to Justin, and it worked. (Editor’s note: Morikawa has made 27 professional starts. He has three wins, including the 2020 PGA Championship, compared to just one missed cut.)

The strength of my game is iron play. I didn’t get enough rounds to qualify for the tour’s statistical rankings in my rookie year, but my stats in strokes gained/approach the green and greens in regulation would have put me near the top in both categories. (Note: Morikawa is 2nd in sg/approach in the 2019-’20 season.) Golf Digest asked me what’s my secret to stiffing iron shots, and I’m going to share a few things I do on the following pages to hit it close. Hopefully they’ll help you play your game a little better. —WITH JOEL BEALL

DIAL BACK YOUR SWING SPEED 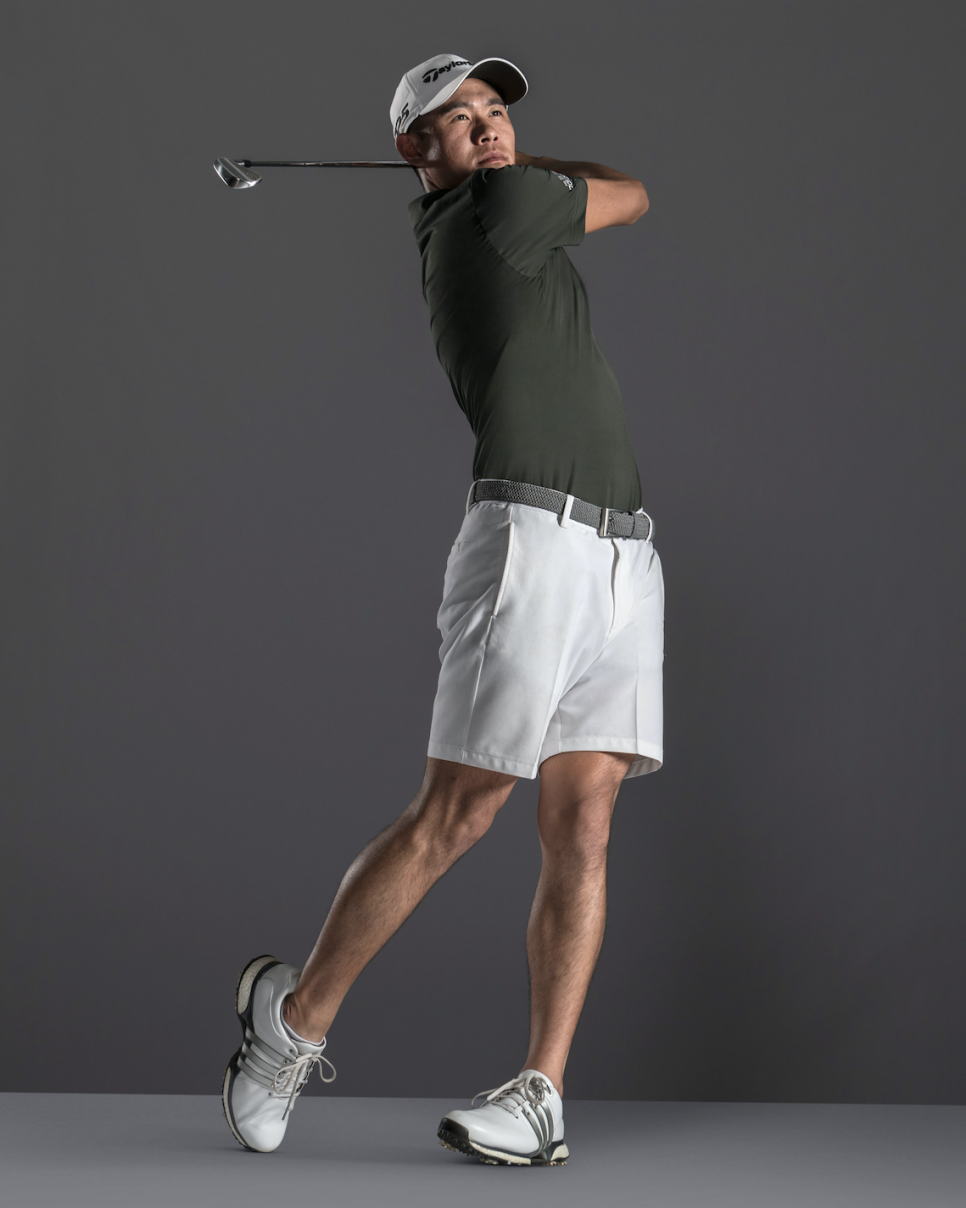 When I was in college at Cal, they said my shot dispersion with a 6-iron was about the same as the average tour pro’s with a pitching wedge. I guess that’s a humble brag, but if you want to know why I think I hit my irons so straight, it’s tempo. Swinging with good tempo is one of the first things you’re taught as a golfer, but many players eventually forget its importance for accuracy and instead focus on club and body positions. To swing rhythmically, first focus on a good finish (above). Practice hitting shots at half speed and gradually swing faster as long as you can make a full swing back and through-—no shortcuts!—and still create this poised-and-balanced finish. It’s the fastest way to improve your tempo and become a better ball-striker.

START BACK WITH THE ARMS IN CLOSE 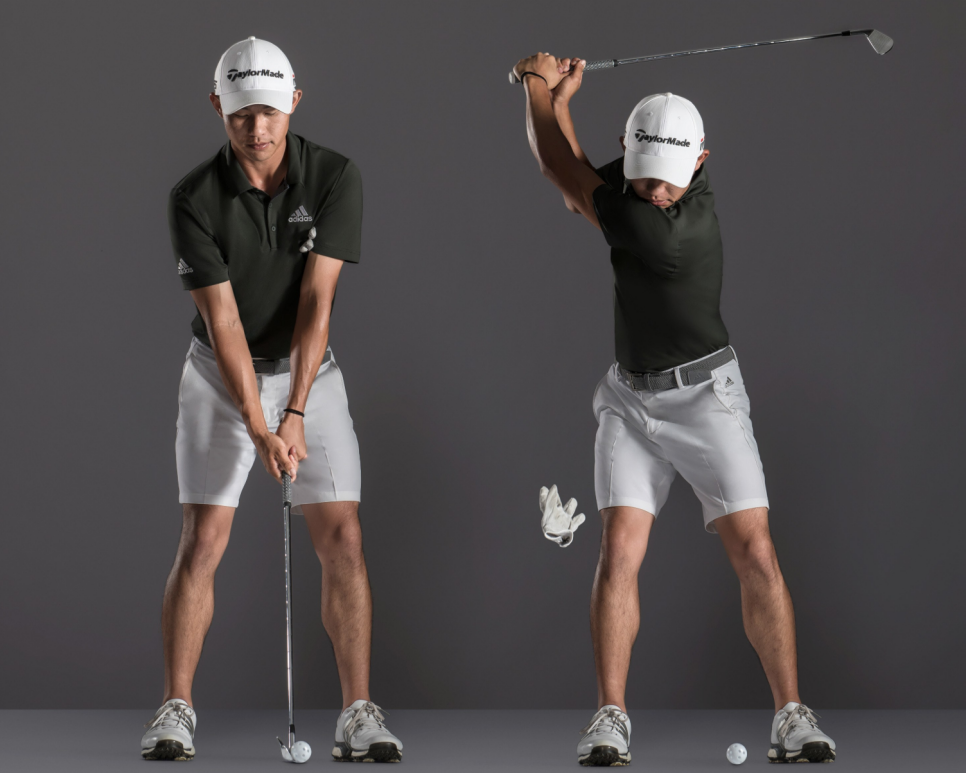 I have a bad tendency of letting my arms drift away from my torso in the takeaway, which makes my backswing too steep and off plane. If I can stay on plane back and down, I don’t need to make compensations to create an accurate and repeatable ball flight. To maintain a better connection between my arms and body and stay on plane, a drill I use is to stuff a glove under my left armpit and keep it there as I swing. If it falls, I know my arms are separating again (above). To try it, work through a progression: First keep the glove in until your club is halfway back, then go three quarters of the way back with it and finally all the way to the top. If you’re on the course, tucking your shirt into your left armpit is another way to stay connected.

HIT IT THROUGH THE WINDOW 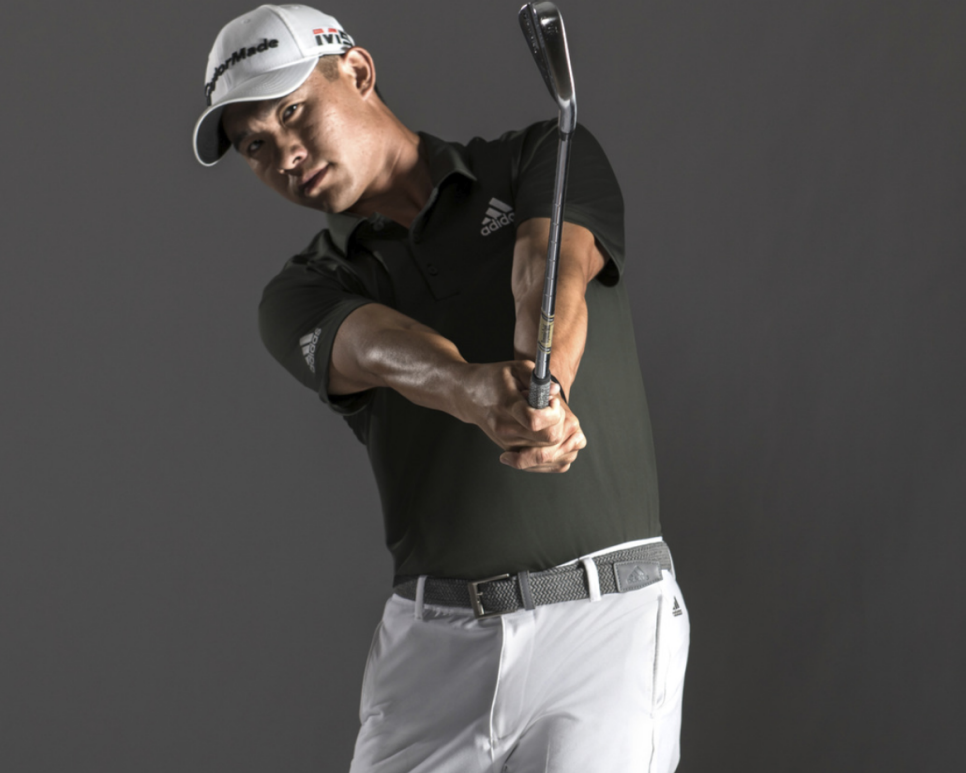 I’m not a slave to TrackMan numbers. What’s more important is that the shape and trajectory of the iron shot I just hit are the same as what I visualized. Ideally, the ball is moving through a window I imagined in the sky as I stood over the ball. Try it. Instead of worrying about hitting the ball or controlling distance, make a swing that can produce the shot you see. You’d be surprised how your body reacts intuitively to make that happen. It frees you up.

Is this the Rookie of the Year? 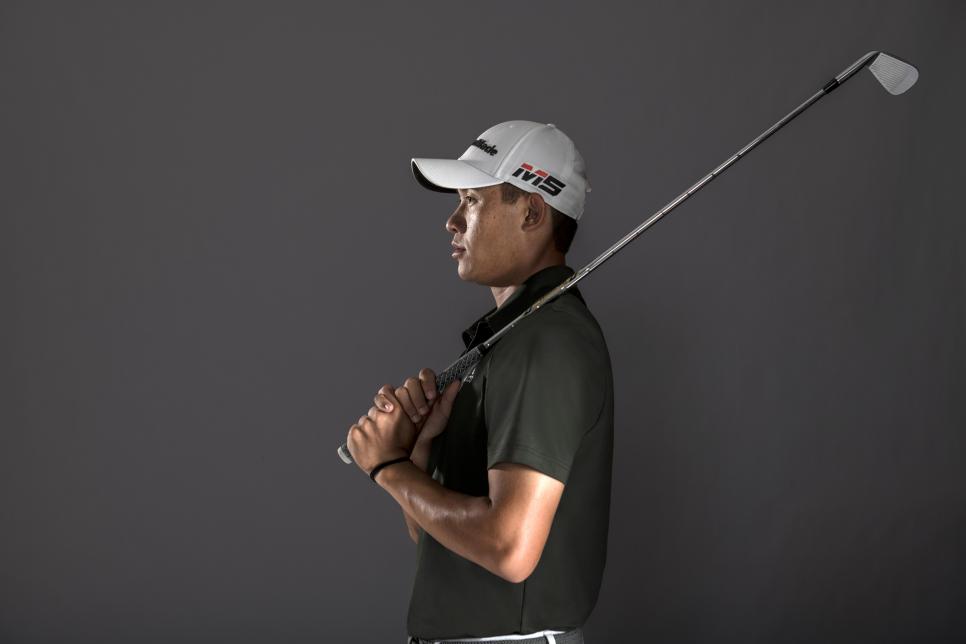 Morikawa made the most of his starts.

It took less than two months on the PGA Tour for Collin Morikawa to go from welcomed guest to full member. He earned his PGA Tour card by winning the Barracuda Championship in just his sixth start after turning professional.

“It happened fast, but that was the goal,” says Morikawa, 22, a native of Los Angeles.

It was fast. Morikawa, the former No. 1-ranked amateur in the world, debuted as a pro at the RBC Canadian Open in early June and finished T-14.

After making the cut at the U.S. Open and the Travelers Championship, he had an amazing July. Over a 21-day span, he finished T-2 at the 3M Open, T-4 at the John Deere Classic and first at the Barracuda.

“You certainly have hope of pulling something like that off,” Morikawa says. “But to do it, that’s something else.”

Perhaps Morikawa’s early success as a pro was inspired by a performance he had as an amateur. At 19, playing in the then-Web.com Tour’s Air Capital Classic—his first professional event—he nearly won, losing in a playoff to Ollie Schniederjans.

Despite the temptation to turn pro after that performance, Morikawa did not waver in his commitment to the University of California Berkeley. “Going all four years and earning a degree was a big deal to me,” he says. Morikawa became Cal golf’s first four-time All-American, and graduated from the Haas School of Business with multiple honours.

“I grew up with Matt in junior golf, and Viktor is extremely talented,” Morikawa says. “They warrant attention.”

Politeness for the competition aside, Morikawa is not shy about where he fits into the mix. “From my first shot at the Canadian Open, I knew I belonged out here,” he says. —JB