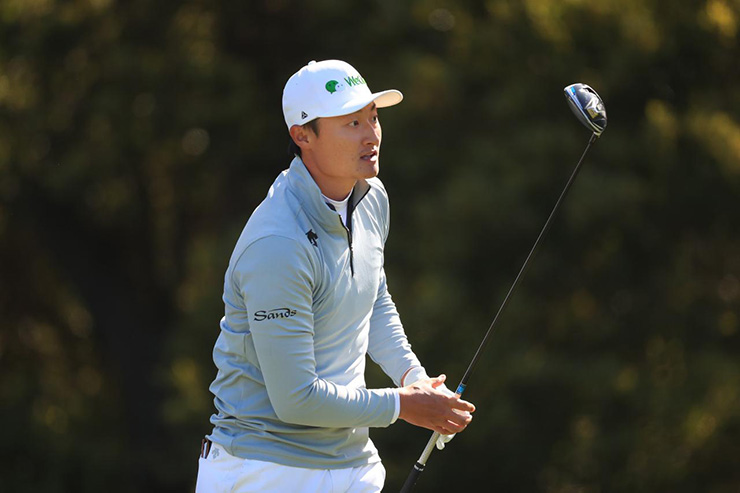 By Joel Beall and Christopher Powers
Thursdays are usually quiet at major championships. The leaderboard is crowded, laying the groundwork for the weekend’s storylines without necessarily knowing which story to follow. While that part of the equation was true at TPC Harding Park—32 players are within three shots of the lead—Day 1 was hardly reserved.

There was Tiger Woods turning in his best opening round at a major in ages. Brooks Koepka continued to be a tour de force during golf’s big events, and provided a nice post-round shot afterwards. Bryson DeChambeau continues to break the game with his newfound power, in this case, literally, smashing his driver, while also showing that muscle plays at major venues.

And Brendon Todd continued one of the most shocking career revivals in the past two decades, turning in a five-under 65 in the day’s toughest conditions to take a share of the lead with Jason Day.

Round 2 at Harding Park promises calm weather and ideal scoring conditions, which should provide plenty of fireworks heading into the weekend. Golf Digest editors will be here with you throughout Friday’s coverage of the 2020 PGA Championship to keep you informed of what’s going down in San Fran.

4:00 p.m.: Update as we all search for the remote and switch over from ESPN+ to ESPN. Tiger Woods is getting some practice shots in before his 4:58 tee time. Martin Kaymer and Jason Day, starting the day at 4-under and 5-under respectively, tee off after phenomenal Thursdays. And, Phil Mickelson hits a miraculous wedge shot on the seventh hole, but can’t finish as he bogeys after a misread on the putt.

3:49 p.m.: We’ve got a Tiger sighting. After shooting a 2-under yesterday—his best first-round score in a major in eight years—Woods has a chance to be in the mix heading into the weekend. Also, Tiger changing his shoes in a municipal course’s parking lot is very relatable. Hopefully he plays better than our motley crew. That shouldn’t be too tough.

3:24 p.m.: Seeing some really impressive fight on Friday from a few guys who looked destined to miss the cut. Brandt Snedeker, still in search of his first major, followed a first-round 72 with a Friday 66 to get to two under. Hideki Matsuyama, who was even par on Thursday, is two under through 15 holes of his second round. Bryson DeChambeau, playing with his C- game right now, is even through 15, two under for the week. Jon Rahm is one under with a few holes to play, as is Webb Simpson. Finally, we have Phil Mickelson down at even par. He’s two under on his round with four to play, and cannot afford to make a bogey, or else he’ll be teetering on the cut line for the rest of the afternoon.

3:04 p.m.: There it is, a five-under 65 for China’s Haotong Li, your solo leader. Enormous round, especially if the wind picks up this afternoon like it did on Thursday. Eight under should at the very least give him a share of the lead after 36 holes. If he ends up leading alone, he’d be the first Chinese golfer to lead a major after any round, according to CBS’ Ian Baker-Finch. Pretty crazy factoid, if true.

2:50 p.m.: Quick update on some of the other big boys out on the course: Patrick Reed, who has four top 10s in his last nine majors, including his Masters win, is quietly creeping up the board. Through 15 holes Reed is one under on his round, putting him at three under for the week, five back of Haotong Li’s lead. Speaking of Li, he’s one par away from posting a five-under 65 and getting into the house at eight under, which you’d have to think has a very good chance to be the leading score at day’s end

Two other intriguing names at three under? One is the bukly Bryson DeChambeau, and the other is the second-longest hitter to DeChambeau on tour, Cameron Champ, who is working on a four under round through 13 holes. No one really noticed it, but Champ collected three top 25s during the restart, and if not for a woeful approach game and a balky putter, he may have been in contention during those starts. Very, very sneaky player heading into the weekend, if he can finish this round off first.

2:30 p.m.: Here come the Englishmen! Paul Casey joins his fellow Brit Tommy Fleetwood at five under with a birdie at the par-4 first, his third of the day. Casey is bogey-free, and currently sits in a tie for second with Fleetwood, Brendon Todd and Jason Day, who will tee off at 4:03 p.m. ET.

2:23 p.m.: Shot of the tournament alert at the par-4 ninth, where Mark Hubbard just holed out from a fairway bunker 238 yards away from the hole. An 11 out of 10. Nuts. Can’t say enough good things about it. Actually, we can say more good things about it. The eagle 2 jumped Hubbard from one over to one under one the week, safely inside the cut line (for the time being). With the par-5 10th coming up, he may be able to get to two under and feel really safe about the weekend. So yeah, pretty good shot!

1:59 p.m.: Li makes his tough par putt to stay at eight under, while Brendon Todd cleans up five feet for par at the eighth to remain five under. Lanto Griffin gets in the mix with a birdie at the fifth, moving to five under. Things are happening.

1:50 p.m.: Despite the three lip-outs, Bryson makes the turn at two under after a tight approach and converted birdie putt at the 18th. DeChambeau is now four under for the tournament, with Li facing a tricky eight-footer for birdie at the 14th.

1:40 p.m.: Tommy Lad! Fleetwood makes the turn at four under, moving up 40 spots in the past two hours. Has never cracked the top 30 at a PGA Championship, but his ball striking is tailored for TPC Harding Park.

1:30 p.m.: Phil Mickelson has back to back birdies to get to even for the event. Right now that’s the projected cut, although it will likely go up given the wind is starting to buck its head. Ahead, DeChambeau makes a no-stress par on the par-3 17th. Fowler puts his tee shot at the 17th to a few feet, now three under through eight and even for the event.

Brendon Todd makes a mess of the par-4 sixth, dropping a shot and giving Li a three-shot advantage.

1:22 p.m.: Li has added two pars to his birdie at the 10th, staying at eight under through 12. The second best round of the day belongs to Tommy Fleetwood, who is three under through seven and three under for the event.

1:19 p.m.: Bryson makes a nifty shot from the sand and is able to convert a six-footer for birdie, his third bird of the day to get back to three under. In the group behind, Rahm, back at even, takes an aggressive line and it pays off, just a few yards short of the green for a simple up-and-down for birdie awaiting.

1:10 p.m.: At the 285-yard par-4 16th, Fowler gets his ball stuck up in the cypress trees. Meanwhile, Bryson—with a 3-wood—is well short and finds a greenside bunker. Still early but things could be moving south quickly for DeChambeau.

On the other side, Todd has a nice lag for a par at the par-4 fifth, and finds the fairway at the sixth. Todd is one under for the day, now two back of Li.

1:02 p.m.: Bryson blows his birdie putt at the par-4 15th well by the hole, and his comebacker lips out. That’s three through six holes for Bryson. Rickie Fowler, playing with DeChambeau, makes a tricky eight-footer for par and maintain a solid round (two under on the day).

12:57 p.m.: Haotong Li with a magnificent lag putt—if a putt can be classified as magnificent—from 80 feet at the par-5 10th. That’s a tap-in birdie to move him three clear of the field.

12:50 p.m.: It’s been pretty easy pickings in terms of weather. But it appears someone has just turned on the fan. Might not be a lot of red numbers left for the morning wave. Yet also spells trouble for the afternoon group.

12:40 p.m.: Haotong Li makes the turn in four under, seven under for the tournament. No one else is better than two under on the course.

Meanwhile, Todd has parred his first three holes to remain at five under, and Jon Rahm has moved to red figures with a birdie and a couple pars.

12:25 p.m.: After back-to-back lips, Bryson makes a birdie at the par-4 13th off a nice approach, getting him back to three under. That was big in getting Bryson level following those tough breaks.

Speaking of tough, J.T. Poston turned in a three-under 67 on Thursday but is three over through six holes Friday morning. Needs something, and something quick, to right the ship.

12:10 p.m.: DeChambeau makes bogey at 12 to drop back to two under. Paul Casey opens with a birdie, which the Englishman needed after closing yesterday’s round with a double.

Lanto Griffin is having a fine morning, two under on his day to get to four under for the tournament.

12:05 p.m.: Haotong Li has added a birdie to move to the outright lead, while Brendon Todd opens with a par on the tough first.

On the back, Bryson misses a six-footer for birdie on the 11th and has some work to do for par on the 12th.

11:40 a.m.: Bryson bombs one at the 10th (his first), his approach scoots just past the green onto the fringe and makes a tidy up-and-down for birdie. DeChambeau proceeds to stick his approach at the long par-3 11th. The big man came up play.

11:27 a.m.: Haotong Li makes par at the fourth to maintain a share of the lead. Li had a memorable 3rd place finish at the 2017 Open, when Jordan Spieth’s back nine troubles almost brought him into the claret jug from 12 strokes back. But since Royal Birkdale he hasn’t posted a top-15 finish in a major.

11:08 a.m.: We have a Haotong Li sighting! The last time we saw the fledging superstar he was single-handedly tormenting the International Presidents Cup team with odd behavior. But Li is two under through three holes to take a share of the lead with Todd and Day.

11:00 a.m.: The best part about watching these club professionals pop it 260 yards is it gives you the fleeting hope that, “Hey, maybe I could compete out there,” and then you realize they’ve just stuck one from 190 yards out of 4-inch rough and remember, “Oh yeah, no chance.”

10:45 a.m.: Some of the big names in the early wave are Viktor Hovland (11:11), DeChambeau and Adam Scott (11:22), and Todd (11:50). These were some of the few players to go low in yesterday’s afternoon wave, and should be in position to improve their standing with the calm morning conditions.