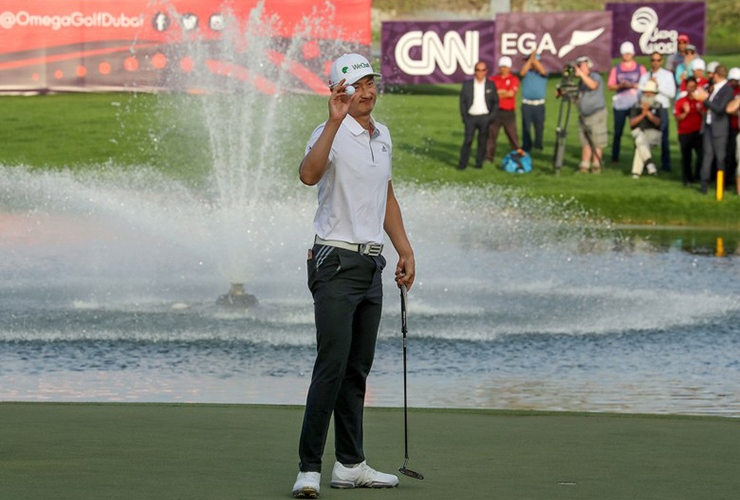 Haotong Li waves to crowds after his final putt on the 18th hole during the final round of the Omega Dubai Desert Classic. The defending champion was later given a two-stroke penalty on the hole for having his caddie lined up behind him while taking his stance. (David Cannon/Getty Images)

By Ryan Herrington
In the new Rules of Golf implemented this month, officials from the USGA and R&A decided to prohibit caddies from standing behind players as they’re preparing to hit a shot or when they take their swings. It was a change that was expected to have the biggest impact in the women’s professional game as several LPGA pros as well as players on the various Asia tours regularly had their caddies line them up throughout the course.

As it turns out, however, the first known infraction of the rule appears to have happened on the European Tour.

China’s Haotong Li was given a two-stroke penalty on Sunday on the last hole of the Omega Dubai Desert Classic. Li was preparing for his birdie putt on the 18th green at the Emirates Golf Club when his caddie was seen standing behind him as he was taking his stance. Li holed the putt, but European Tour officials decided that he had violated the new rule so he had to put himself down for a bogey 6 on the hole. Instead of finishing T-3, the defending champion fell to T-12, costing him roughly €100,000.

The new rule specifies that from the time a player “begins to take a stance for the stroke” until the stroke is made, a caddie “must not deliberately stand on or close to an extension of the line of play behind the ball for any reason.” Li could have avoided the penalty had he backed off the stroke and retaken his stance.