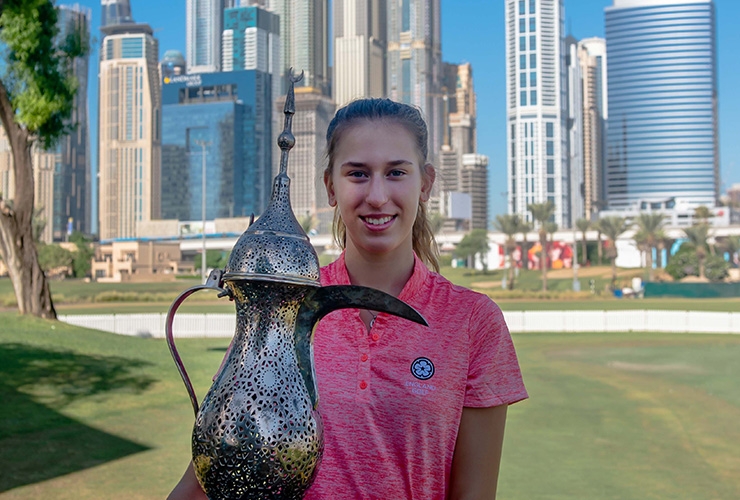 Chiara Noja poses with the Dallah Trophy near a short-game practice area at Emirates Golf Club.

By Kent Gray
Chiara Noja will be able to compare notes with Alison Muirhead at next week’s OMEGA Dubai Moonlight Classic, presuming she’s made it back from Cloud 9 in time.

The 14-year-old German amateur, a new Dubai resident for all of a fortnight, has been handed a dream invite to tee it up with some of the game’s biggest names in the $285,000 Ladies European Tour Pro-Am. South African 22-year-old Muirhead, a LET rookie whose family moved to Dubai when she was eight, and Moroccan Maha Haddioui have also earned wildcards to the November 4-6 event on The Faldo at Emirates Golf Club.

The trio complete the 56-strong LET, LPGA Tour and amateur invitees list. Each will be grouped with three amateurs for the opening 36-holes of teams competition before the pros go it alone in the final round of the day-night event to complete their separate 54-hole strokeplay scrap.

Noja, already off a +5 handicap, came to prominence when she captured the Hertfordshire Lady County Championship as a 12-year-old. Her family have made the move to the UAE in search of perfect practice facilities and further opportunities to see if she can eventually make it in the pro ranks.

She didn’t expect to make her LET debut so soon after disembarking at DXB to start a new life.

“I couldn’t believe the news when the Tournament Director [Simon Corkill] contacted me to confirm that I will be playing in the OMEGA Dubai Moonlight Classic. Thanks to their support, I will be able to test myself against the very best women in the world,” said Noja.

“I only arrived in Dubai a few weeks ago but I already feel at home here. I am working hard on my game every day and hopefully I’ll be able to make the best possible use of this invitation and show not only my fellow competitors but the Ladies European Tour that I deserve my spot.” 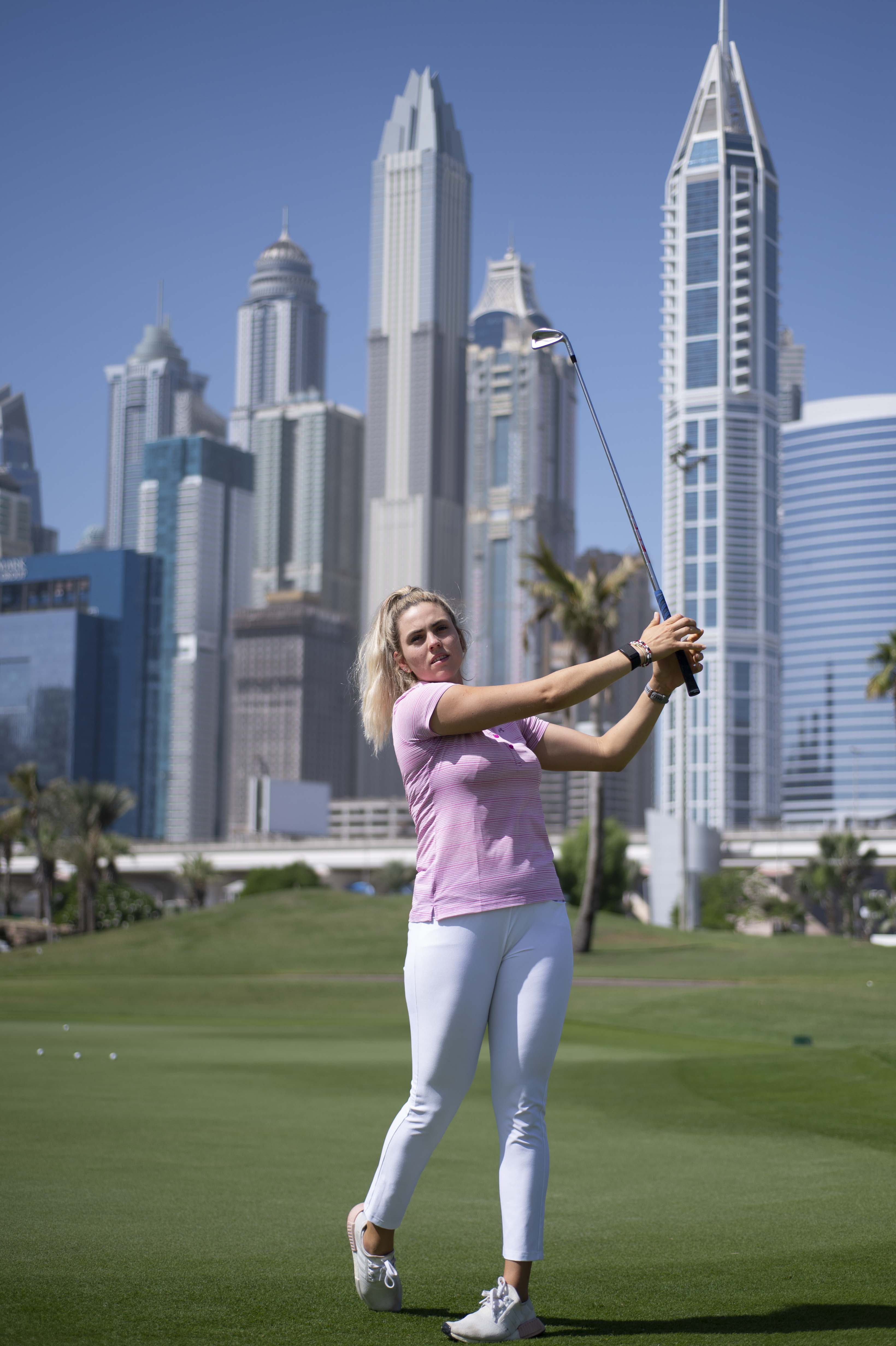 Muirhead is one who knows what Dubai can do for young golfers with big dreams.

“Having grown up in Dubai and dreamt of one day having the chance to compete against the very best, it’s very surreal to now have been offered that opportunity. I was lucky growing up in Dubai, home to some of the finest courses in the world allowing me to regularly practice in prime conditions regularly.

“As I got better, I was able to compete in multiple girls and ladies’ competitions, organised by the Emirates Golf Federation and it was success at these that gave me the confidence and desire to succeed at the highest levels of the game.”

As well as swapping similar stories, Muirhead and Noja will also get to rub shoulders with one of the strongest fields assembled in the 14-edition history of Dubai’s LET stop.

Health and safety precautions mean fans will not be allowed at The Faldo but Dubai Sports Channel will carry three-hours of live coverage from 7pm to 10pm on each of the three days.

Haddioui, who remains the only Arab woman to play on the LET (since 2012) is equally excited to be involved in a Dubai event like no other.

“This is a tournament I’ve always enjoyed playing in and being an Arabic speaker, Dubai is always a place I feel incredibly welcome,” said the 32-year-old.

“The LET tournament in Dubai has been a mainstay on all of our collective calendars for over a decade now and it’s one we all enjoy returning back to year after year. Obviously, it will be different not playing in front of spectators but we’re all incredibly grateful that we’ve been given the opportunity to play in such a prestigious tournament.”

In its second season as the rebranded OMEGA Dubai Moonlight Classic, the $285,000 event has been switched from May to November after achieving global recognition as the world’s first professional day-night tour event last year.