Charley Hoffman shoots 65, leads by one at the RBC Canadian Open 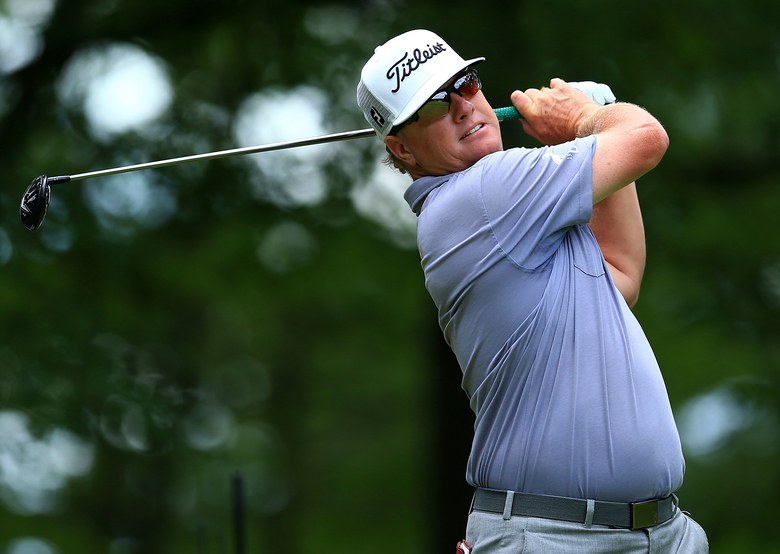 OAKVILLE, ON – JULY 29: Charley Hoffman of the United States plays his shot from the 11th tee during the third round of the RBC Canadian Open at Glen Abbey Golf Club on July 29, 2017 in Oakville, Canada. (Photo by Vaughn Ridley/Getty Images)

Charley Hoffman’s name appearing at the top of the leader board has become a regular ritual. The four-time PGA Tour winner is enjoying one of the best seasons of his career, with two finishes inside the top 3 and 11 inside the top 25. He hasn’t been able to secure that fifth victory yet though, but he’s put himself in great position to do so at the RBC Canadian Open. A seven-under 65 on Saturday at Glen Abbey Golf Course outside of Toronto has given him a one-stroke lead at 17-under 199.

Hoffman, 40, began his round with three straight pars, and then turned it on at the par-3 fourth. He made a birdie there and two more at the fifth and ninth to turn in three-under 32, following it up with a four-under 33 on the home nine. A win on Sunday would give Hoffman victories in back-to-back seasons, his last coming at the 2016 Valero Texas Open.

One behind Hoffman at 16-under 200 is the reigning Valero Texas Open champ Kevin Chappell, who carded a six-under 66 that featured nine birdies. Chappell, 31, didn’t even have the RBC Canadian Open on his original schedule, but made the late addition because he wasn’t happy with how he played at last week’s Open Championship. He looks like he’s regained form and could add a second victory to an already stellar season with another low round on Sunday.

The round of the day belonged to Robert Garrigus, who posted a bogey-free 10-under 62, tying the Glen Abbey course record. Garrigus, 39, had missed seven cuts in his last 11 events and was disqualified for signing an incorrect scorecard two weeks ago at the John Deere Classic. Since then he’s finished 10th at the Barbasol Championship and now finds himself in a tie for third at 15-under 201 through 54 holes. A win on Sunday would be just the second of his career, the first coming at the 2010 Children’s Miracle Network Classic.

Also at 15 under is 36-hole leader Gary Woodland thanks to a four-under 68. He’s looking for his first win since the 2013 Reno-Tahoe Open.

Six players are tied at 14-under 202, including defending champion Jhonattan Vegas. The Venezuelan posted his third consecutive sub-70 round, a five-under 67 that featured birdies on two of his final three holes. Winning back-to-back would make him the first to do it at the RBC Canadian Open since Jim Furyk in 2006 and 2007, and it would give Vegas his third career win.

Through 15 holes Tony Finau was at 10 under, but he vaulted over 19 players on the leader board with eagles on the par-5 16th and 18th holes. He’s also at 14 under and looking for the second victory of his career.

World No. 1 Dustin Johnson opened with a five-under 30 on his front nine, but made a costly double bogey on the par-4 11th that robbed him of some momentum. He finished with a four-under 68 and sits five back at 12-under 204.