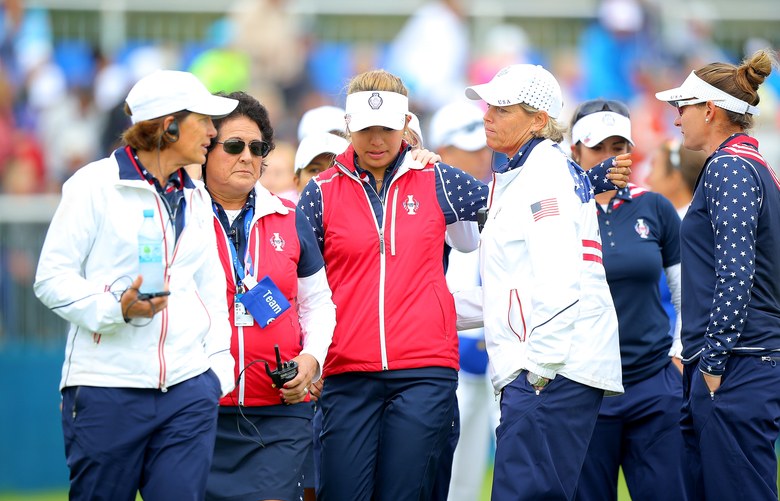 SANKT LEON-ROT, GERMANY – SEPTEMBER 20: Alison Lee of the United States is comforted by Juli Inkster the United States Team Captain (l), Nancy Lopez (2nd from left) and Wendy Ward (r) United States assistant captains on the 18th green after Lee’s error in picking up her ball on the 17th hole before it had been conceded by her European Team opponents Suzann Pettersen and Charley Hull (seen in the right of the image). This error led to the European pair claiming the 17th hole and led to the United States losing another crucial point during the completion of the Saturday afternoon fourball matches in the 2015 Solheim Cup at St Leon-Rot Golf Club on September 20, 2015 in Sankt Leon-Rot, Germany. (Photo by Thomas Niedermueller/Getty Images)

By Keely Levins
Remember the putting controversy at the last Solheim Cup? You know what we’re talking about. Alison Lee picked up that short putt on the 17th hole of the four-ball competition, thinking she’d been given the putt. Suzann Pettersen called it back, saying she didn’t tell Lee the putt was good. If you’re thinking, This was two years ago, please stop talking about it, we’re with you. But after a very similar incident occurred at the U.S. Girls Junior at the beginning of August, it’s clear this is still something that can happen. And nobody wants it to happen again at the Solheim Cup this year in Des Moines.

American Captain Juli Inkster is being cautious. She’s making one player on her team in each group in charge of giving putts.

“I just think you’ve got to have one person in the group, they’re in charge of giving putts,” said Inkster. “And that’s kind of the way I’ve done it with my team. One person takes control of giving the putts and that way we don’t really have any controversy.”

After the heated, tearful arguments that ensued after the debacle in 2015, it’s hard to blame Inkster for putting in an extra safety measure before her team tees off on Friday.