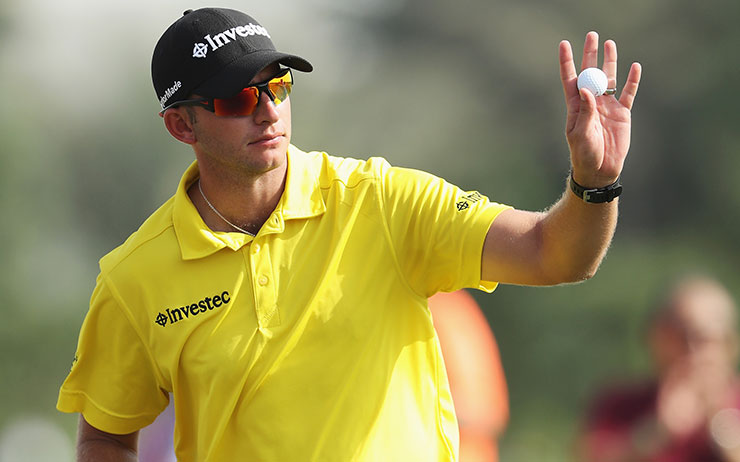 Dean Burmester has overcome immigration issues to earn a shot at his maiden European Tour title.

The Zimbabwe born South African is playing the Abu Dhabi HSBC Championship for the first time, a week after finishing fourth in the BMW South African Open. However, his week got off to a rocky start when it seemed he may not make it to Abu Dhabi Golf Club.

“This is kind of a bonus week for me. Didn’t get a Visa until Tuesday morning, and got in here at 3.00am Tuesday morning. It’s just nice to be here, and to play well is just a bonus,” the 27-year old said.

“Visas are a bit of an issue. Unfortunately our passport’s not exactly the greatest one to be travelling on in the world, but I managed to get it sorted.”

The six-time Sunshine Tour winner certainly got it sorted Saturday, cruising to a single bogey 66.

“Pretty solid stuff. Actually woke up this morning feeling not too great. But as the round went on, sort of felt better and better and got a couple lucky breaks early on when I wasn’t feeling too great. The putter is rolling well this week, so I’m pretty happy.”

The Abu Dhabi debutant had two top-10s last season with his best European Tour finish being T3 in the Tshwane Open in 2015. At -11, in a five way tie for seventh place alongside South Koreans Byeong Hun An and Jeunghun Wang, Swede Peter Hanson and Austrian Bernd Wiesberger, he’ll be looking to go two better Sunday.

“[My round] kick started on the eighth. I hit a great shot into seven and missed the putt. Then a solid birdie on eight. Hit the green in two and two-putted and nice birdie on nine and another birdie on 10 and another one on 11,” he said.

“Those four in a row kind of just came out of nowhere, and that kept me in the game. Before I knew it, I saw my name on that leaderboard and I was kind of just grinding out the last few holes and a nice way to finish.” – John Tully-Jackson