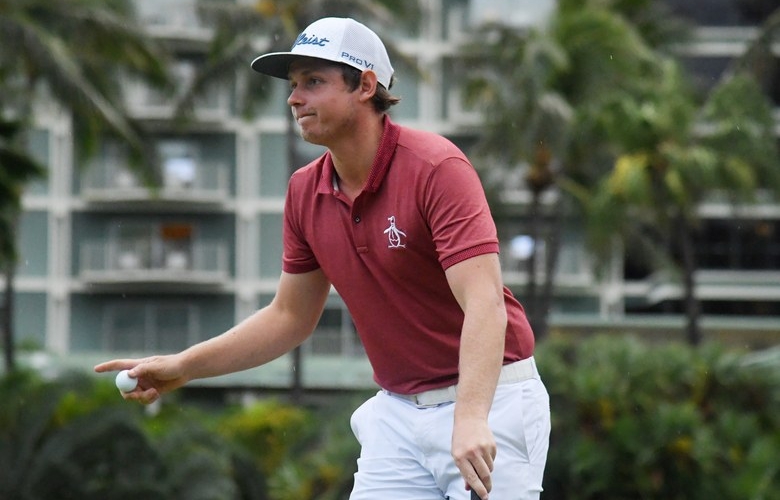 Harry How
HONOLULU, HAWAII – JANUARY 12: Cameron Smith of Australia reacts to his birdie on the tenth green during a playoff to win in the final round of the Sony Open in Hawaii at the Waialae Country Club on January 12, 2020, in Honolulu, Hawaii. (Photo by Harry How/Getty Images)

By Brian Wacker
HONOLULU — At last month’s Presidents Cup in Australia, Cameron Smith quickly found himself 3 down to the Americans’ hottest player, Justin Thomas, through the first five holes of their Sunday singles match before he rallied for a gritty 2-and-1 victory to earn, at least in the moment, a crucial point against the Americans. In the end, it ended up not mattering but for the final score. The victory by the 26-year-old Aussie, however, was telling.

There’s a certain rough-around-the-edges toughness to Smith, who came from a blue-collar background in Brisbane, was never the longest hitter amongst his peers, often relying on an impeccable wedge game to wear down his opponents, and didn’t mince words recently when asked about the touchy subject of Patrick Reed’s bunker-gate controversy.

Sunday at the Sony Open in Hawaii, that toughness showed up again. Smith needed it on a wet and wild afternoon at Waialae Country Club, where he began the day three strokes behind leader Brendan Steele before forcing a playoff and winning on the first hole of sudden death.

“You just had to hang in there,” Smith said. “No one was playing good golf today.”

Sometimes just hanging around is enough. Smith just played good enough, too, especially when it mattered most.

Trailing by a stroke when he and Steele arrived at the 72nd hole, and after a 15-minute wait on the tee on the par 5, both men striped their tee shots down the middle into nearly identical position.

That’s when things got wild.

Ryan Palmer, tied with Smith and playing in the group in front, began walking back to the fairway bunker from where he had just hit his second shot, off the top of a large video board on the right side of the hole and out of bounds. Instead of hitting a provisional, Palmer had tried to find his ball, leading to another long delay. He never did, returned to the bunker and made bogey.

Webb Simpson, who was playing in the group with Palmer and also a stroke back, stuck his wedge to 15 feet behind the hole but narrowly missed his birdie try.

After the delay, Smith then hit his second into a greenside bunker left of the green, while Steele hooked his well left of the green, with the ball bouncing off the roof of a grandstand. Blocked by the grandstand, he got a free drop but was unable to get up and down and settled for par. Smith, some 70 feet away in the sand, meanwhile, pitched to eight feet and cooly made the putt for birdie to force a playoff.

In sudden death and with daylight fading fast, the two went to the 10th hole instead of the 18th, which was too water-logged and needed to be squeegeed near the end of regulation. Smith pushed his drive into the right rough while Steele was in perfect position, 87 yards from the flag and in the fairway. But after Smith knocked his shot to 10 feet, Steele hit wedge over the green. Chipping off the mud and wet grass, Steele’s ball scooted 15 feet by and he missed the par putt coming back, opening the door for Smith, who two-putted for par and the win.

The victory for Smith, a two-time Australian PGA champ, was his first individual title on the PGA Tour. His only win prior to Sunday was alongside teammate Jonas Blixt in the Zurich Classic three years ago.

“I’ve always been quite good at not giving up,” said Smith, who began the tournament four over through the first two holes on Thursday before rallying for a respectable even-par 70 that day.

On Sunday he didn’t give up either.

“Just having to make the putts, feeling like something else is on the line, I think I drew a little bit from the Presidents Cup,” Smith said. “I felt as though I played some of my best golf that week, and with such little time between these events I think that’s kind of rolled over definitely into this week.”

The victory gets him into next year’s Masters as well as next year’s winners-only Sentry Tournament of Champions in Maui. His four birdies en route to a final-round 68 also helped raise more money for the wildfires that have devastated his home country of Australia the last few months.

That destruction was never far from his mind this week — one of Smith’s uncles lost everything and he fled to the U.S. to stay with Smith, who lives in Florida. Neither was the ability to fight back.

“I’ve never felt the need to kind of mentally check out in any way,” Smith said. “I started [the tournament on Thursday] bogey, triple bogey, and then finished that day even par and progressed from there.”

All the way to a victory.